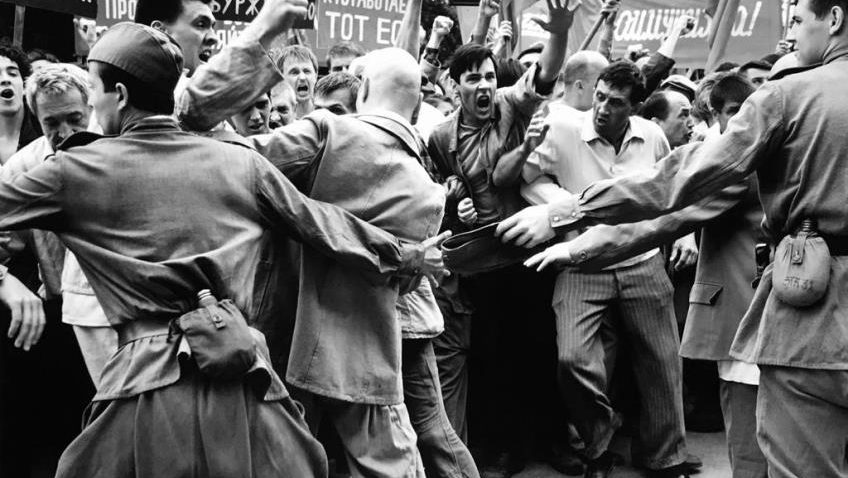 There is an entire genre of films about that darkest moment in a nation’s history when a government turns on its own people. Many of the films in the genre put imaginary words in the mouths of real and recognisable people, while others, like Dear Comrades! present electrifying, factual reconstructions of events with fictional characters who epitomise the era. From The Pianist, and Hotel Rwanda, to the documentary For Sama, in which a Syrian doctor, wife and mother run a hospital under siege by President Assad, to Mike Leigh’s docu-drama Peterloo, to the black comedy, The Death of Stalin and the corrosive Donbass, the most heinous crimes against humanity often take place within a nation’s borders, not across them.

Not all of these films are made by native directors or can be made within the countries under fire, which is one more reason to celebrate Dear Comrades! Co-writer (with Elena Kiseleva) and director Andrei Konchalovsky’s depiction of the 2 June 1963 massacre of protesting factory workers in Novocherkassk, Soviet Union, is home grown without sacrificing any of the brutal honesty of the background to, the botched execution and cover-up of the massacre. Konchalovsky manages to work within Russia (it doesn’t hurt that his father wrote the Soviet and Russian national anthems) and in Hollywood (Runaway Train, Tango & Cash, Maria’s Lovers). And it doesn’t hurt that Putin was ten-years old in 1962, and Khrushchev was to blame.

What distinguishes Dear Comrades! from most internal massacre movies is that it is told from the point of view of a senior member of the ruling Communist Party that clamped down on Electromotive factory (NEBF) strikers, who were protesting against rising food price and long rationing queues, long after WWII had ended. In fact, secretly, Lyuda thinks that the Soviet Union is unravelling under Khrushchev. Reflecting on the slow evolution of Marx’s socio-economic vision believes, “If Stalin were still in charge, we’d be under Communism already.”

A seemingly die-hard Stalinist with a messy, secretive and illicit private and family life, Lyuda is played by the charismatic Julia Vysotskaya, a Konchalovsky regular (House of Fools, Paradise) and one of the only professional actors in the cast. Her passionate performance is possibly fuelled by her personal connection to Novocherkassk, where the willowy, striking-looking blond was born in 1973, eleven years after the massacre that still haunted the population.

On the morning of 1 June 1962, Lyuda wakes up early in the bed of her married lover and fellow party official, Loginov (Vladislav Komarov) and quickly dresses, complaining about the queues, scarcity and rising price of milk and other basics.

Not for the last time in the story, Loginov warns Lyuda about her subversive talk, reminding her, “you get party rations, so you don’t ask questions.” And we see how Lyuda takes advantage of her position to jump the queue and head to the back room where she is given cigarettes for her cynical, world-weary, Red Army veteran father (Sergei Erlish), alcohol and sweets for her daughter, Svetka (Yuliya Burova), a head-strong, rebellious 18-year-old who works at the Electromotive factory.

A topical theme running all the way through the film is the gagging of speech – and the government’s manipulation of the truth. Just as Loginov warns Lyuda, so she warns her father and her daughter to watch their treasonous talk and actions. Later in the film we see how nurses attending to the 87 reportedly wounded in the massacre are made to sign gagging orders, as are the rural police who are assigned to bury the bodies of the 26 dead, shipped out of the factory grounds under cover of night and buried in randomly borrowed or unmarked graves.

But first, Konshalovsky daringly takes into chaotic, garrulous Communist Party meetings that smack of an Armando Iannucci script for VEEP or In the Thick of It. In higher strategy meetings, once the strike is imminent, one KGB official cannot believe the irony of “a f***ing strike in a social country” while dignified, principled Army General Pliyev is forced by the KGB to arm his men against their own people. It is during a higher-level meeting that Lyuda lands herself in the thick of it, speaking out when Loginov begs her not to, distinguishing herself by declaring that the strikers deserve no mercy and should be prosecuted to the full extent of the law (executed).

There is a moralising irony behind the story that, if Eric Rohmer were attaching a proverb to it, might be “Let he who is innocent cast the first stone.” Lyuda gets a taste of Stalin’s, and her own medicine when Svetka goes missing, and has, she fears, been killed in the massacre. None of the deluded workers believe that the army would use real guns or kill their own people.

In the second half of the film Loginov is replaced by an unlikely ally, the handsome KGB agent Viktor (Andrey Gusev), who is clearly attracted to Lyuda, but also feels compassion for her predicament. All roads out of Novocherkassk are blocked and everyone is gagged. Lyuda relies on Viktor’s credentials to get them past the army blockades and to track down the poor policeman who might have buried Svetka. The petrified man is dragged out of his cramped home (leaving a silent wife and baby) uttering, “I don’t know anything” until he caves in, indicating the grave where he buried a teenager with a hole in her sock (one of many details that enrich this script).

Noteworthy is the striking and creative use of sound effects in lieu of a score, and Andrey Naydenov’s monochrome cinematography using the outmoded but resurging Academy ratio, chosen by Kelly Reichardt for her powerful, character-driven Western, Meek’s Cutoff, and Pawel Pawlikowski, for his Oscar winning Ida (also shot in black and white), the epic nature of the meticulously reconstructed massacre is reined in by the claustrophobic atmosphere, intimacy and detail (the faces of a huge cast of characters are branded in your memory) of this squarer aspect ratio.

That the moral of the story is so obvious and unsubtle is not that much of a problem here because Konshalovsky pacts so much authentic detail and emotion into his busy canvas that is well absorbed. If it is hard to admire or even like Lyuda, it is impossible not to share the director’s compassion for her plight, or to see her hard stance as more of a coping mechanism that allows her to function than as a heartfelt ideology.

You can read our review of For Sama here.

You can read our review of The Death Of Stalin here.

You can read our review of Donbass here.

You can read our review of Peterloo here.

You can read our review of Meek’s Cutoff here.