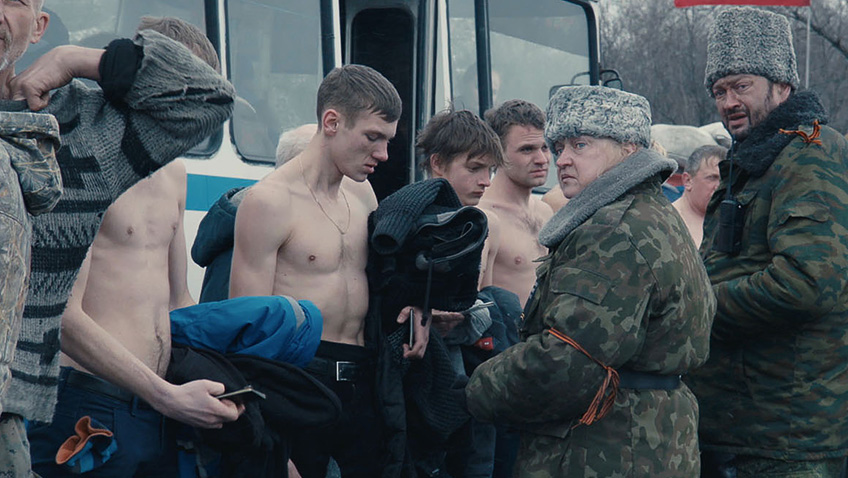 Writer/director Sergey Loznitsa has almost cornered the market in political horror movies and, for a creative, highly intelligent man born in Soviet Belarus and raised in the Ukraine, the motivation and the material was there to be seized. His latest film, Donbass

, matches the nihilistic despair of A Gentle Creature that turned the cold, indifference that marked Kafka’s The Trial

into deliberate, sadistic cruelty. But whereas A Gentle Creature was nonspecific in time and place, like his documentary Maidan, Donbass

is time and site specific. Loznitsa now lives in Germany and has included a German journalist (deemed a ‘fascist’ by Ukrainian Separatist forces) in two of his vignettes of life in the Separatist region of Southeast Ukraine, known as Donbass.

It is not Loznitsa’s style to give us any context, but since Donbass

is not a documentary, but is pretty close and is based on real events, it might be helpful. Historically, ‘the’ Ukraine as it was called before its second independence on 24 August 1991, (The Soviet Union re-annexed Ukraine, Belarus and the Baltic Republics during WWII) has been badly treated by the Soviet Union. Under Stalin it was the centre of what historian Timothy Snyder calls The Bloodlands in his book Bloodlands: Europe between Hitler and Stalin

When the pro-Russian politician Viktor Yanukovych was removed from power (he resides in Russia and is wanted for high treason by Ukraine) in the 2014 Ukrainian Revolution that followed Russia’s the annexation of the Crimea, the Donbass region became involved in armed conflict between pro-Russian separatists and Ukrainian forces and people. Ukrainian Separatists are backed by money, guns, tanks and strategic training from Russia, just as the Crimean Separatists were, in order to, in Putin’s words, “ensure proper conditions for the people of Crimea to be able to freely express their will”.

Loznitsa knows, of course, about Putin’s track record in freedom of expression and the various vignettes that comprise Donbass

are not only satirical in nature and seething in tone, but they begin and end with cynical propaganda exercises, a major tool of the regime. Ordinary looking ‘actors’ leave a make-up trailer and are herded into an alleyway to play eye witnesses to a fictitious bus bombing and then attack the ‘fascist’ Ukrainian government. Everyone who is not a Separatist is a ‘fascist’.

The fake news theme continues when an angry woman storms into a council meeting to assault the chairwoman over a slanderous news story. An opportunist lowlife who dawns more official airs informs a group of demoralised nurses that the head doctor has been stealing vital supplies and food. When he leaves the nurses and patients, a prostitute awaits him as well as the doctor, his partner in crime.

Impoverished commuters on a rundown rural bus route are hijacked by Separatists demanding contributions to the ‘cause’ and berating the men (who are forced to strip in the freezing cold) for not fighting. An ordinary small businessman on his way to collect his daughter from school is forced to hand over his car to a military official. When the astonished man refuses, the official tells him that they have accessed his bank account and he will be forced to turn over his money if he does not cooperate. 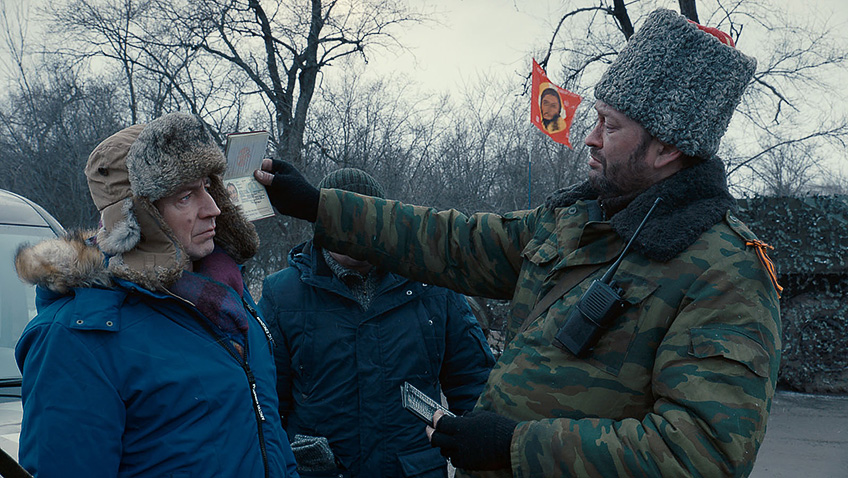 Cruelty, theft, opportunism and mob rule are everywhere in this lawless region, but Loznitsa lets the vignettes build up to actual bloodshed and violence. In a horrific scene that sticks in the mind two Separatists tie a Ukrainian soldier to a bus stop and encourage the town’s people to humiliate him. The soldiers have tied a sign that reads Execution Squad Volunteer to his chest, when, the man softly protests to deaf ears that he worked in the kitchen.

At first the mainly young people are happy to blow their smoke in his face and take selfies, but when a middle-aged woman says, ‘give him a good punch for the people’, the crowd turn on him physically. As the soldiers drag him away to save his life, the mob continue beating him. The scene is reminiscent to the treatment of Jews in the 1930s, before more efficient means of mass murder were implemented.

Later some of this mob pours into a town hall for the wedding of an obese, grotesque and probably inebriated woman with a thin quiet groom in a suit. The crowd cheers so loudly that the official can barely conduct the ceremony, and the ceremony ends with nationalist singing. This is the weakest segment as it is superfluous at this point. Loznitsa draws attention to the working class people that support the Separatists – almost all of whom are obese – and even makes this bride look like the floosies in the brothel scene in A Gentle Creature. Presumably, these ignorant, inhumane people looking for scapegoats are susceptible to propaganda and believe that the difficulties Ukraine faces will disappear under Russian rule rather than being of its making. 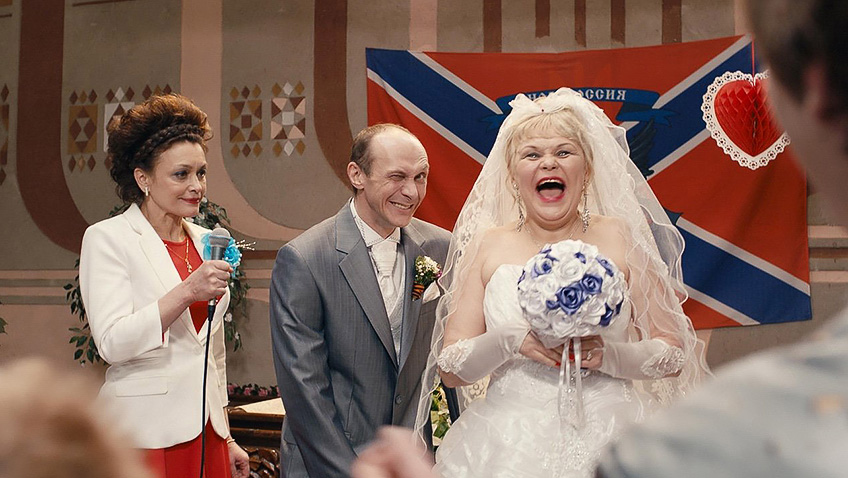 Loznitsa, however, makes it clear in the production notes that his subject is ‘the particular type of human being, which is produced by a society, where aggression, decay and disintegration rule… their mentality, and their relationships with each other that prepare the ground for catastrophic historical events.’

That readiness to believe in the lies fed to them by Russia’s adept misinformation machine once again appears in the horrifying final scene, in which the actors themselves become Separatist pawns, and a new set of actors are brought in to bear witness to a Ukrainian sponsored tragedy. Here the hand-held camera that has put characters under the spot light in close up and medium shots, is no longer obvious. Instead a long shot widens the range of our view (we see police rushing to the scene before a gunshot is fired) , bringing us further away from the trailer as police and fake news crews go about their business and the end credits roll.