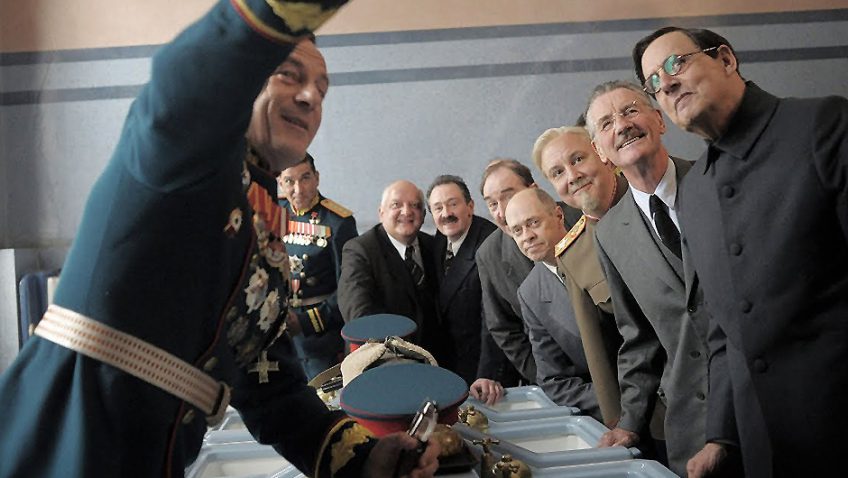 The first time I saw political satirist Armando Iannucci’s (In the Loop, Veep, The Thick of It) dark, comical farce, The Death of Stalin, I was laughing too hard to consider whether it was offensive or not. After brushing up on the power struggle that consumed the Politburo following Stalin’s death on 5 March 1953, I saw it again. I laughed just as much, but was better equipped to admire how Iannucci and his three co-writers ingeniously integrate biographical details and historic facts into a script that seems pure theatre of the absurd.

As for the juxtaposition of mass murder and comedy, Iannucci has done the impossible: he has made a film that depicts the horrors of the Stalin era and the evil murderers in the Politburo, while allowing us to laugh – with, in fact, many Russians at the time – at the paranoia that affected everyone, including Stalin himself. Iannucci achieves this not only with historical accuracy (notwithstanding artistic licence with dates, titles and time compression), but by distancing us through with the casting of a dazzling line-up of British and American comic actors, speaking in their own voices and accents. Not everyone agrees. In September, the Guardian newspaper reported that, ‘a high ranking official in the Russian Ministry of Culture threatened to ban the film, alleging it was part of a ‘western plot to destabilise Russia by causing rifts in society.’

Based on a French graphic novel by Fabien Nury (one of the script’s co-writers) and Thierry Robin, the film opens with a piano recital that has caught the arts loving dictator’s attention. When Stalin (Adrian McLoughlin) phones to request a copy, the panic-stricken manager at Radio Moscow is informed that they did not make one. After playing the blame game, he blocks the exits and negotiates with the reluctant pianist, Maria Yudina (Olga Kurylenko) to repeat the performance. In real life the humble, spiritual Yudina defied Stalin by wearing a prohibited cross, but he was apparently too moved by her music to act upon her transgression. She was openly critical of the leader and the writers cleverly work this into the plot.

When it is known that the conductor has left, the guards are sent to fetch a retired conductor who is getting ready for bed. Herded out in his pyjamas, with his distraught wife pleading for his life, the conductor is bemused to find himself, not in front of a firing squad, but in front of an orchestra and a bedraggled audience that had been dragged in off the streets and ordered to applaud. This incident is based on a true story, which is even zanier than in the film, but you get the idea.

Paranoia does not stop with the intellectuals carted off to face death squads or Siberian prisons. In an early scene, the Council of Ministers, groveling to please the mercurial dictator, dance, literally, to Stalin’s unpredictable tunes. At this regular meeting, Stalin orders head of secret police, Lavrenti Beria (Simon Russell Beale) to arrest a fresh list of victims and we hear Beria instruct one of his cronies to ‘shoot her before him and make sure he sees it.’ At one point Malenkov complains, ‘I’m exhausted. I can’t remember who is alive and who isn’t.’ Jason Isaacs in The Death of Stalin

In the background Nikita Khrushchev (Steve Buscemi), who survived the siege of Stalingrad, is bragging about it. No one is listening, however, as Stalin mentions it’s time for a cowboy movie (he loved them). The ministers are too afraid of offending Stalin to mention the late hour or their families waiting on tenterhooks at home.

Back at home, Khrushchev and is wife are doing their homework, which consists of recording what has found favour that day with Stalin. ‘The joke about the Navy got no laughs’, Khrushchev relates, while she jots down, ‘NO MORE NAVY JOKES!’

The moment of Stalin’s death is, of course, imagined, but not the circumstances in which the leader is found unconscious in his own urine. One by one, the ministers arrive (introduced by captions), jockeying for position. ‘He’s irreplaceable,’ moans the indecisive Deputy Leader Georgy Malenkov (Jeffrey Tambor), only to reflect magnanimously that, ‘as Deputy I have to replace him.’

‘I thought you said he was irreplaceable,’ snaps Beria. Beria, a rapist and sadistic murderer, is always waiting for someone to say the wrong word, or, as he does at the funeral organised by Khrushchev, help that process along but framing his foes.

The film turns into true burlesque as the ministers agree they have to call a doctor and muse, ‘if only we hadn’t put away all the competent doctors for treason.’ They send the secret police to round up anyone left rationalising that, ‘if Stalin lives, then he’s a good doctor, and if he doesn’t, Stalin won’t know.’

At this point we are introduced to Stalin’s daughter, Svetlana Stalina (Angela Riseborough) who doesn’t trust the ministers (unaware that Beria murdered her Jewish lover, she asks him to find him), but knows she lacks the power to oppose them. Then we meet her handsome, alcoholic brother Vasily (Rupert Friend), a distinguished WWII air force pilot, but who is prone to waving around a loaded gun. When he is notified of his estranged father’s death, Vasily fears that Stalin has found out about the 1950 death of the USSR Air Force Ice Hockey Team in a plane crash, which Vasily covered up by substituting new players.

Foreign Secretary Vyacheslav Molotov (Michael Palin) is so faithful to Stalin that when his own wife was arrested, he condemned her as a traitor. There is a hilarious scene when Beria, hoping to gain Molotov’s favour over Khrushchev, frees his wife, forcing Molotov, caught unaware, to switch from insults to feigned joy at her return.

The superstar of the final section of the film is scene-stealing Red Army Chief Zhukov (Jason Isaacs). A popular Minister of Defence, WWII hero (he made the cover of Life Magazine in 1944) and friend of Eisenhower, by 1953, Beria and Stalin were jealous enough to demote and disgrace Zhukov. In the film Zhukov resents Beria for trying to replace the Red Army with Beria’s NKVD secret police (actually, in 1953, the MGB) and joins forces with Khrushchev to topple their mutual enemy.

It is impossible to pick out stand-out performances from this sensational ensemble cast, although Beale, Friend, Buscemi and Isaacs all give award-worthy performances. The script and the direction are impeccable, but only a still paranoid government could fear that a British period satire could destabilise the nation.