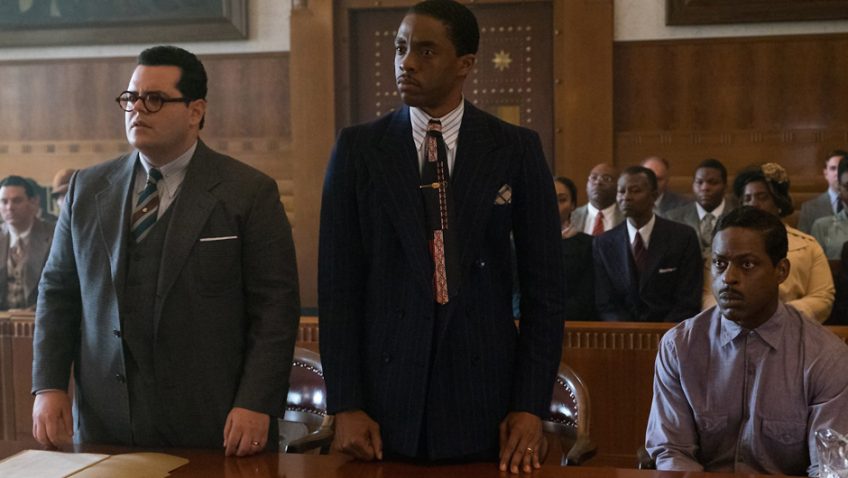 is one of the best genre-bending films of the year, combining the best of a biopic, a buddy movie, a court-room drama, a detective yarn, and, yes, a superhero origins movie, too. Superhero because Thurgood Marshall (Chadwick Boseman, 42, Get On Up), a brilliant, intrepid, 32-year-old trial lawyer for the NAACP in 1940-41, when the film is set is destined to become the first African-American Justice of the US Supreme Court.

And it all begins with Michael Koskoff, a 74-year-old Connecticut trial attorney who had taken up screenwriting as a hobby in his sixties, and became fascinated by the largely forgotten case of The State of Connecticut vs. Joseph Spell. You will, too. You might even find yourself looking forward to seeing the charismatic Boseman as a Marvel Comic superhero in the upcoming movie, Black Panther – based on the comic that Marshall

As the only black trial lawyer in the American South, Thurgood Marshall was in constant demand, hailed as a hero and saviour by cash-strapped, innocent victims of racial prejudice. The Spell case is different. Greenwich Connecticut is not only one of the wealthiest towns in the USA, but it is a Northern town, 50 miles from New York City. Yet underneath the surface, it is as racist as Marshall’s Southern beat, with an unenforced 1933 law banning discrimination in public places, de facto segregation in restaurants and a bigoted old boys’ network in the judicial system.

In the early morning hours of December 11, 1940, socialite Eleanor Strubing (Kate Hudson) was found, soaked and bruised, wandering on a deserted road near the Kensico Reservoir in New York’s Westchester Country. She told the truck drivers who spotted her that she had been sexually assaulted by her black chauffeur, Joseph Spell (Sterling K Brown), while her husband was out of town on business. Spell then threw her over the rails of the reservoir – though not on the rocky side, where she would have died, as Marshall is quick to notice, but on the placid side, where a strong swimmer like Mrs Strubing could –and did- easily swim to shore.

As Marshall is quick to point out, there are many other element of Mrs Strubing’s story that, to all but the prejudiced Judge Colin Foster (James Cromwell), and his country club crony, State Prosecutor Lorin Willis (Dan Stevens), don’t add up.

The odds are nonetheless against Spell, who not only has a criminal record and a messy, if not illicit, personal life, but, after 16 hours of ‘interrogation’, confesses to all charges. The odds become worse when Judge Foster refuses to allow Thurgood to speak in his court, citing Marshall’s lack of jurisdiction. In reality, the Defence had it even rougher, as Willis refused to hand over evidence and a list of their witnesses. Judge Foster’s ruling forces Marshall to reply on a local insurance trial lawyer, Samuel Friedman (Josh Gad), originally brought in as a local assistant. After questioning Spell, Marshall is convinced of his innocence, but Friedman is not.

Friedman, a family man, is a Jewish insurance litigator, known for his dramatic technique and his brains, but also for keeping a low-profile. He has spent his lifetrying to fit in with the WASP (White Anglo Saxon Protestant) Greenwich society, and not making any waves. He is horrified when his partner and brother Irwin (John Magaro) gets him attached to this toxic, high profile case, which results in death threats to him and his family.

It does not help that the supposedly fair-minded northern, east coast newspapers are trying the case in their pages with loaded phrases such as ‘highly coloured’; ‘the coloured servant’ and even ‘a coloured man with a bad hangover.’ Panicked by the news coverage, Westchester families reportedly began firing their black servants (many of whom only became servants as businesses would not hire them).

The stage is set for Marshall, an irreverent, cocky activist, powerful orator and warrior in the court room, to become a tutor to the reticent, retiring, uncommitted Friedman, teaching him about jury selection and feeding him tactics and Friedman’s entire cross examination. Although Friedman begins to notch up points and gain confidence, it is only when his wife receives disturbing news about her relatives in Nazi Germany that Friedman realises he, Marshall and Spell have a common cause.

The case is affecting Marshall personal life, too. Constantly on the road, he is absent for most of his wife’s first pregnancy and when she suffers a miscarriage. He is unable to return to comfort her due to the trial, but keeps the tragedy to himself.

In a predictable, but no less gratifying manner, the case turns Marshall and Friedman into a formidable team, but buddies. What is less predictable is a twist in the case that gives rise to a risky, but brilliant line of defence that would be a spoiler to divulge. One reason why this early ‘Northern’ case was chosen to represent Marshall’s twenty years as a trial lawyer as opposed to, the landmark segregation case Brown v The Board of Education, is because it has faded into history.

In addition to the inevitable structure of the film and clichés of the genre(s), Hudlin has both Friedman and Marshall beat up by racist thugs on the same night, coincidental incidents that do not appear to be substantiated. But those are quips, especially when you factor in the witty and intermittently humorous script; the satisfying and uplifting true story; top notch acting and a good mystery story.

Boseman is a star in the making, and for all the bravura of his trial scenes, one of the best moments takes place in the waiting room at the train station just after the verdict is delivered. True to life, Marshall had been called to Oklahoma on a new case while the jury is deliberating. Leaning against the wall by the pay phone, Marshall takes a drink of water from the Whites only fountain. A black man on a nearby bench watches him as Marshall nods and heads towards his destiny.