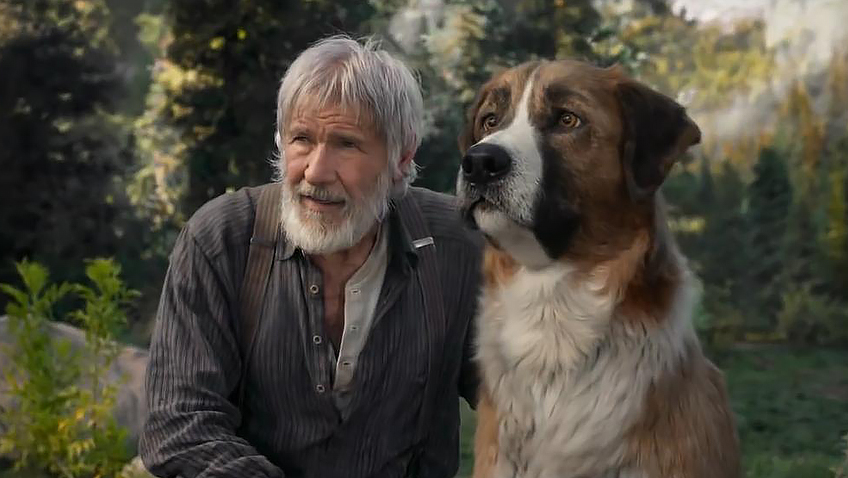 It’s hard to resist This Call of the Wild

Whether you go see The Call of the Wild

alone for nostalgia sake, or take your grandchildren, expect everyone to be engrossed in a heart-warming, suspenseful adventure story, while conscious that there’s something weird about Chris Sanders’ adaptation of Jack London’s 1903 book

. That is largely because John Thornton (Harrison Ford) is a human and Buck the dog is made through motion capture animation. But Michael Green’s (a co-writer of Logan) script makes the most of Harrison Ford as actor and narrator. His portrait of an old man for whom gold has lost its glitter, makes the film real.

Like Buck, in 1897, Jack London made the journey from the warmth of California to Alaska and into the snow-covered Yukon in western Canada at the height of the Klondike Gold Rush. It was a brutal, dangerous, lawless, but exhilarating time for a single, young man and London seems to have made more money from describing it in The Call of the Wild, White Fang

and the story To Build a Fire than from prospecting.

’s main human character, John Thornton, is partly auto-biographical, too, particularly in his reliance on the bottle. London died age 40, but not from alcoholism alone. As we see in the film, a wild dog stands a better chance of survival in the Yukon than a man, and while London was fortunate enough not to have been murdered, he suffered many common health ailments from his
gold prospecting days, including scurvy.

There have been several adaptations of the book

, beginning with Fred Jackman’s 1923 silent version produced by Laurel and Hardy’s producer, Hal Roach. William Wellman’s 1935 adaptation, starring Clark Gable and Loretta Young, was the first film released by the newly merged Fox Film Corporation and Twentieth Century Pictures in 1935. There is then, a certain irony in the fact that the first adaptation of the novel to anthropomorphise Buck so that he is closer to Benji than to Lassie, and sanitise Thornton’s environment so that it looks more like Elsa’s kingdom in Frozen than a Klondike boom town, is Walt Disney Corporation’s first film following the takeover of 20th Century Fox.

Sanders (who co-directed How to Train your Dragon and Lilo and Stich) has earned his salary directing a fine cast who had to pretend they were in the Canadian wilderness, talking to and interacting with invisible canines, for only the early California scenes were shot on location and all the animals are CGI creations. All that CGI is laborious work and is skilfully done. It looks beautiful (and always bright) but is as subtle as Dan Stevens’ villain. It seems like a waste of cinematographer Janusz Kaminski who shot Schindler’s List and Saving Private Ryan, with such nuance in recreating a period ambience.

It is not hard to turn this novel into a Disney film. It begins with Judge Miller’s (Bradley Whitford) oversize, spoilt Saint-Bernard-Scotch Collie cross running through his house with a maid grabbing the china vase before it topples over as she’s done many times before. Thunderous sound effects redundantly emphasise Buck’s size as he wreaks havoc.

Either the judge never bothered to domesticate Buck, or we are meant to see his wild atavistic traits straight away. The spirit of his ancestors, a mysterious black dog, does not appear for some time yet. Buck attacks the lunch that the kitchen staff have been slaving over for days, showing up for the family photo with a tell-tale turkey bone sticking out of his mouth and food all over his fur. 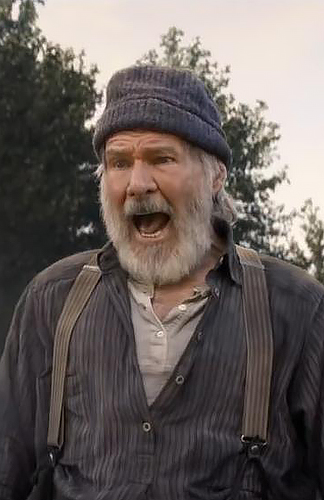 Harrison Ford in The Call of the Wild

Punishment comes swift when Buck is dognapped by a chap holding an advertisement ‘dogs wanted’. The Gold Rush ate up dogs faster than Buck consumed the Sunday lunch. He is taught the power of the stick by a cruel handler and shipped to the busy town of Skagway, Alaska, which, we are told in Ford’s melodic, homespun, but frequently redundant narration, is the gateway to the Yukon. Buck meets John Thornton when Buck fetches the harmonica that John has dropped and returns it to him. Thornton is impressed. Their eyes lock as though they know that each will be the other’s saviour and liberator.

In Skagway, Buck is purchased by a good-natured French-Canadian named Perrault (Omar Sy, Inferno, Untouchable), who delivers the mail, always late. The dog could have done a lot worse as Perrault who realises what a culture shock it is for a dog who has never worked, or seen snow, to run through it, pulling a heavy sledge. In true Disney fashion Perrault is accompanied not by François, as in other adaptations, but by his girlfriend Françoise (Cara Gee). It is she who Buck saves when she falls into a hole in the ice, and not Thornton as in the novel. But even this scene never comes across as threatening with the CGI, although from then on, Buck can do no wrong. The lead dog Spitz, who bullies the other dogs, is jealous and angry.

A good chunk of the film is taken up with how Buck becomes the leader of the pack, with a combination of generosity, strategic thinking and strength. After earning the trust and gratitude of the other dogs, he confronts Spitz in the inevitable showdown as, we are told by the narration, there can only be one lead dog. With Buck leading the pack, the mail will never be late again.

In the last third of the film John Thornton, with the soppy backstory of a man in need of redemption, adopts Buck. Buck repays his kindness by helping his master give up drinking and enjoy life. With minimal provisions, they jump in a canoe, off to discover a Brigadoon (and it really looks like that) that John’s son hoped to find. Unlike in the novel

and other films, however, John is not interested in gold; he is in the Yukon to do penance – and bond with Buck.

There are plenty of adventures, but Green has wisely streamlined the plot and characters while remaining fairly faithful to the book, John’s fellow prospectors, Hans and Pete are no more, and Dan Stevens gets a bigger role as both a cruel dog owner (and a stubborn, ignorant prospector) and a greedy psychopath with a grudge against John. Meanwhile, John enjoys his idyllic summer retreat while Buck befriends a rare, white, female wolf who will call him back to the wild. Harrison Ford is so good that he makes you believe that everything is real. Their touching friendship will leave you in tears, even when a dead person has no business narrating Buck’s destiny.