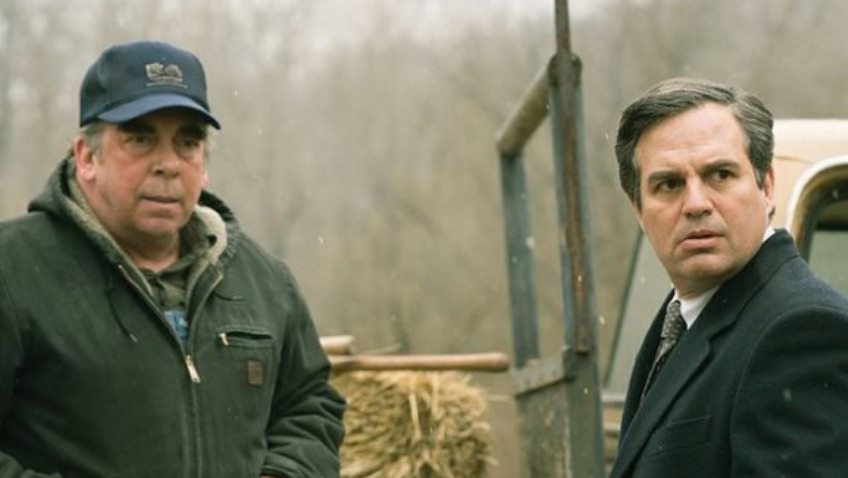 Dark Waters is not just another real-life whistle blower film, or another legal thriller about a corporate cover-up: it is a gripping and chilling warning from director Todd Haynes (Carol, Far from Heaven) that should alarm any consumer and responsible government in the world today. It is no coincidence that the title resembles that of Japanese director Hideo Nakata’s horror movie, Dark Water, but there is nothing supernatural about the water in Haynes’ movie, beautifully shot by Haynes’ regular cinematographer, Edward Lachman. That it is based on Nathaniel Rich’s New York Times Magazine article The Lawyer Who Became DuPont’s Worst Nightmare might give away the plot, but not the real nightmare that becomes a stressful, costly endurance test for Cincinnati corporate lawyer Robert Bilott (Mark Ruffalo, outstanding) as he uncovers DuPont’s dirty secret.

A quarter of a century ago, and just four years before the real Rob Bilott filed his lawsuit against DuPont, Haynes’ breakthrough film, Safe, focused on an ordinary suburban homemaker who develops symptoms of Multiple Chemical Sensitivity (MCS) when exposed to low doses of everyday chemicals. Many people in her life suspect her allergy to the 20th century is psychosomatic. Farmer Wilbur Tennant (Bill Camp) from Parkersburg, West Virginia has a credibility problem, too, when he seeks Bilott’s help with his dying cows and contaminated water. But Bilott’s dilemma is deeper: he has a young family to support and his firm, Taft Stettinius & Hollister, represents not the little guy, but corporate clients, like DuPont.

When Tennant makes the trip from Parkersburg to Cincinnati at the suggestion of Bilott’s grandmother in 1998, it is because no local lawyer would take on his case. They are all in the pay of DuPont. Bilott, who has just been made partner, is embarrassed at the interruption of a staff meeting by this hillbilly farmer, carrying a box of videotapes. Bilott declines the job, wishing him good luck. ‘I don’t need luck; I need help,’ Tennant says in his gruff voice before exiting, leaving the tapes behind.

The tapes are stomach turning autopsies of his beloved dead cows, showing black teeth, tumors, and strange looking livers and brains. Bilott drives down to Parkersburg and has a look at the DuPont Dry Run landfill and the plant, five times the size of the Pentagon. But he drives by community centres and other public service buildings sponsored by DuPont, the area’s largest, and aside from a few corner shops, only employer. It is not this tour that begins to change Bilott’s mind, but lunch with his grandmother who shows him photos of the Tennant property, where he used to play as a boy, riding horses and milking the farmer’s cows.

Curious, when Tennant mentions an Environmental Protection Agency (EPA) report, that Tennant never received, he has a friendly word with DuPont’s Phil Donnelly. They meet up at an industry function where Donnelly reminds his reverent audience that ‘Better living through chemistry is not just a slogan’, a speech that establishes the role that lies and advertising played in convincing our parents and grandparents to buy up the miracle product, Teflon, which netted DuPont one billion dollars a year.

DuPont is one of the few corporate chemical companies not represented by Taft Stettinius & Hollister, and the film shows the hostility in the company after Bilott’s boss Tom Terp (Tim Robbins) gives him permission to explore Tennant’s case discretely, on a short term, low-cost basis and Bilott gets hooked.

The only way to get more information is to sue, and that is what Bilott does.

The documents that Donnelly sends are designed to placate Bilott or discourage him, because although Bilott specialises in chemical companies, he’s never heard of a substance referred to as PFOA. But Donnelly has underestimated Bilott, who is ready to risk his career for his professional integrity.

Full discovery comes in the form of a warehouse full of boxes of loose papers dating back to 1957. If it is Donnelly’s revenge, it is what will occupy Bilott long after the first victim’s trial nearly 20 years later in 2015. With the help of experts and research, he learns that PFOA, also referred to by DuPont as C-8, is perfluorooctanoic acid. It dates to 1951, nearly two decades before the EPA was established in 1970. And as such, the substance, which, among other symptoms, such as facial deformities and cancer (that strikes Tennant and his wife), causes teeth to turn black, is not regulated by the EPA. They rely on the chemical company itself to disclose to them the substance and to establish the safe levels in water supplies.

If the timeline that begins each “chapter” borders on the documentary, it is not only a helpful establishing device, but underscores what a painstakingly slow slog this case was, frustrated at every turn by DuPont’s highly paid lawyers. Bilott now has three sons and has taken such a significant cut in salary that he argues with his long-suffering wife Sarah (Anne Hathaway, excellent, but underused) about the need to send the children to a private Catholic school.

Yes, the film, is so factual it plays out like a docu-drama, but Haynes gets around this by staging some truly tense and dramatic scenes (including a cathartic interview with DuPont’s CEO) and focusing on the human toll of the pressure. Each actor had the advantage of speaking with their real-life counterparts, or, if the character were no longer alive, listening to depositions. The piecing together of the scientific evidence, the lurid details of the symptoms, and the ever-compelling visuals also play a part in creating a moving drama. Visuals, too, play a role. It is not only Lachman’s cinematography, but the superb production design from Hannah Beachler, (the first African American to win the Oscar for Production Design, for Black Panther) that, throughout the years, provides atmosphere and authenticity.

It is not just the stress and exhaustion for Bilott (who is hospitalised at one point), that suggests the human toll on everyone involved, but Darlene Kiger (Mare Winningham) who becomes a social pariah for going public against DuPont when people in the town are afraid of losing their jobs. We hear the horrifying story of how Darlene’s first husband, who worked on the Teflon line, died, as did many of his colleagues, while women were temporarily removed from the factory after one woman gave birth to Buck Bailey, born with one nostril. The real Buck Bailey has a cameo toward the end of the film, highlighting the real and immediate dangers of this product and societies where governments pay lip service to regulation and consumer safety.