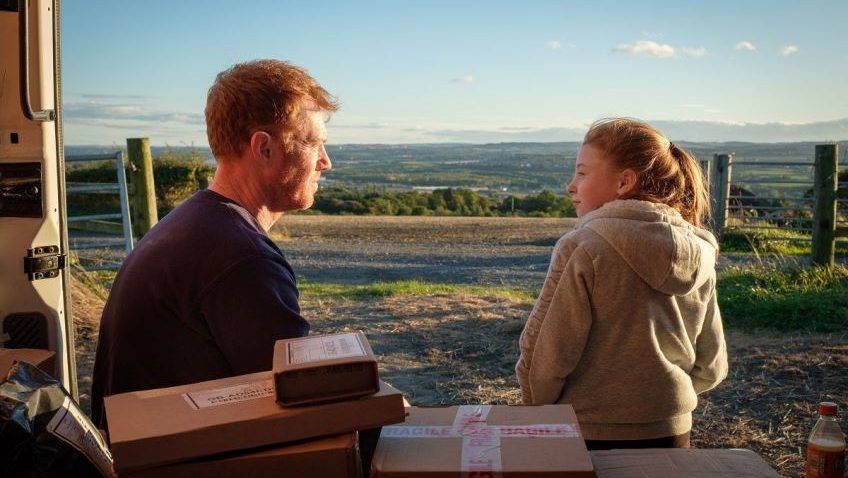 SORRY WE MISSED YOU (Entertainment One), set in Newcastle-upon-Tyne, is a companion piece to I, Daniel Blake and even better. Ken Loach, always critical of society, takes a look at Zero-Hour Britain and shows the financial and emotional pressures on vulnerable working-class families who are being ripped off. He hones in on one exploited husband and wife. He is a delivery man working for a franchised courier service and has to meet impossible deadlines and targets. She is a home carer working for the NHS. Their ill-paid workload means they see little of each other and their children. The human cost is huge. The advantage of having unfamiliar faces in the lead roles increases the documentary reality for which Loach is famous. Kris Hitchen and Debbie Honeywood are excellent. The film carries a terrific punch. The heart-breaking script is by Paul Laverty.

DARK WATERS (Arrow). Todd Haynes directs a solid and reliable American legal drama based on fact: a battle over water contaminated by the DuPont chemical company and killing off livestock and exposing locals to cancer and affecting millions of lives. The legal system is rigged in favour of Big Business rather than the individual. Mark Ruffalo plays Rob Bilott, the unassuming, dogged corporate lawyer, who took 20 tenacious years to nail the corporation’s wilful negligence and corruption.

LAST HOLIDAY (Lionsgate). A commercial traveller is told by his doctor that he has a fatal disease and will soon be dead. He takes himself off to a posh seaside hotel which is full of well-known British character actors (playing staff and clientele) whom he lectures and gives money to. During his stay there is a strike by hotel staff. He encourages everybody to muck in. J B Priestley’s moral fable is a predictable socialist tract, full of laboured irony. Alec Guinness stars as the do-gooder.

BEAT THE DEVIL (BFI), an unfunny crime caper, had a bad press and did badly at the box office in 1953. It hasn’t gotten any better over the years. It was meant to be a parody of The Maltese Falcon. Director John Huston and the actors were defeated by Truman Capote’s script which talks far too much and lacks comedy and thrills. Humphrey Bogart (who was under no illusions and knew the film was a mess) looks old and sick. Peter Lorre is in poor shape. Gina Lollobrigida has difficulty with the dialogue. Robert Morley (in a role meant for Sydney Greenstreet) does what he does best and plays Robert Morley. It’s a pity that Mario Perrone (who plays the purser) isn’t given more to do. He’s funny in himself.