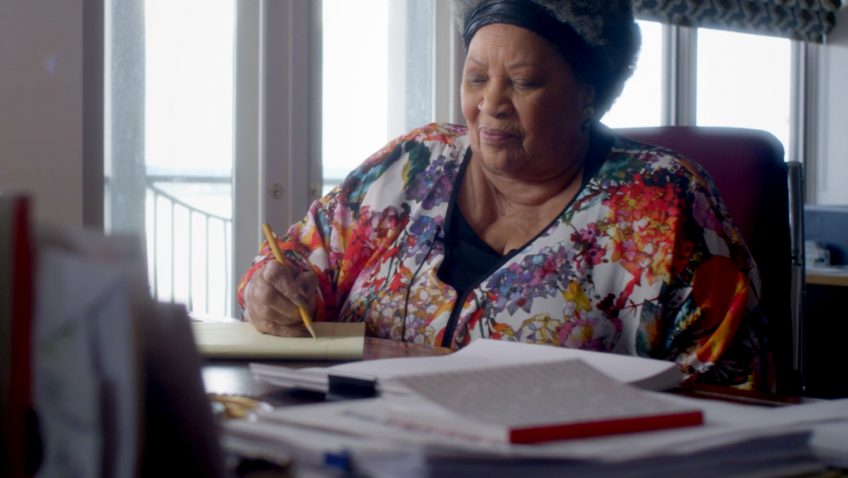 An inspirational, absorbing portrait of a remarkable woman.

When Chloe Ardelia Wofford was two during the Great Depression, the family’s landlord set fire to their house because her father could not pay the rent. Her grandfather had read the Bible five times because there was no other book to read. His granddaughter, Toni Morrison, who died in August 2019, just after this absorbing documentary was released in the USA, was a compulsive reader, although religious books were not high on her list. She left an estate of 20 million dollars, 21 ground-breaking books and dozens more that she had edited for other authors. As well as changing the world for her own two children, she was recognised in her time with numerous literary awards, The Presidential Medal of Freedom, The Pulitzer Prize and the Nobel Prize for Literature: the first black woman to be so honoured.

Director Timothy Greenfield-Sanders met Morrison when he photographed her in New York City for her novel Tar Baby in 1981. Over 30 years later, he persuaded her to participate in this biopic and began shooting the expressive, animated and personal interviews which are the backbone of this loving documentary.

Morrison discovered the power of language at an early age when she saw the word “fuck” and wrote it on the pavements in the racially integrated town of Lorain, Ohio, where her parents had moved to escape the racism in the South. Her mother ran out screaming, forcing her to pour water over the word, but never telling her what it meant. Morrison was again struck by the power of words when her first novel, The Bluest Eye, set in Lorain, Ohio during the Depression, was legally challenged by state school boards across the country that wanted it removed from the curriculum.

Far from being angry, Morrison was thrilled to hear from the Department of Criminal Justice that her novel Paradise was dangerous and could cause a prison riot. For Morrison, writing was all about expressing emotions buried, even in “black” literature. These strong reactions, far from discouraging her, contributed to her prolificity.

Admirably, Greenfield-Sanders lingers over the individual novels, analysing their impact and legacy through a variety of talking heads, and Morrison herself. The Bluest Eye was (perhaps inspired by the 1934 film Imitation of Life) about a young, black girl who buys into the white world view that she is ugly and inferior because she is black. As a result, she longs for blue eyes in order to fit in. Morrison wrote the novel to make all people aware of how it feels to have your self-esteem destroyed by prejudice and to confront the self-hatred and self-destructiveness in black people that derives from seeing yourself through the ignorant white gaze.

While critical appraisals display the range of the issues she tackles and help us situate the novels in their context, there is a tendency toward hagiography. Angela Davis, whose own writing Morrison edited at Random House, states that Morrison’s 1987 novel Beloved was “a turning point in the history of the world” and that America can never look at slavery in the same way again. While the novel’s impact was significant, (Morrison won the Pulitzer Prize shortly after its publication), as was all of Morrison’s writing, for writing from the black point of view without “white friendly” narration or explanation, earlier writers, including Richard Wright and James Baldwin also portrayed the “black problem” as “America’s problem” and pointed out the deleterious effect on people of colour – and all Americans – in never seeing themselves in dolls, toys, on television, in magazines or in films (except as servants).

What comes across in the film, however, is that if Morrison is not the first writer to challenge the idea that a black writer had to address the white demographic to justify their output, she was arguably the first and most consistent female novelist to do so. Beloved is a novel about a black mother’s horrific choice, but also her strength, that cut to the nefarious heart of the slave experience.

The film excels in exploring the different facets of Morrison’s life that give the film its full title. For Morrison was not only an over-achiever, but a woman of many pieces. While she gives short shrift to her marriage, she was proud of her work as a mother to architect Ford and the late writer Slade (she never shut the door when writing at home); a teacher; an editor; a writer. Morrison did these jobs simultaneously until she left Random House to write full time in 1983 in the beautiful home on the Hudson River that we see in the film.

Morrison tells a delightful anecdote about how she left her babies with her sister and went to Syracuse, NY in response to a wanted ad in the New York Review of Books. Her accomplishments after she landed this job as an editor at Little Random are inspirational. Among other contributions to literature, she played a role in the Civil Rights movement by editing Mohammad Ali, Bobby Seale, and persuading Angela Davis that she was not too young to publish her autobiography at age 28. The anecdotes of Robert Gottlieb, former Senior Editor at Knopf, are also uplifting. He recalls being so struck by his employee’s first novel (at age 39), that he edited all of her books under the Knopf imprint, remaining a close friend until her death.

Other talking heads include Angela Davis, Fran Lebowitz (who accompanied Morrison to Stockholm), Oprah Winfrey, Hilton Als, Walter Mosley (apparently Obama’s favourite writer), Farah Griffin, Russell Banks, David Carrasco and Paula Giddings. A criticism of the film is that the speakers are only labelled by name on their first appearance. For Oprah Winfrey that is not a problem, but for less recognisable faces, remembering who everyone is over two hours is a frustrating challenge. We are also asked to recognise voices, from Kim Cattrall and Whoopi Goldberg, to some lessor known voices.

Morrison’s refusal to express the black experience through a white lens led to the criticism that her writing was too good to be so self-limiting and should be more “universal.” But more valid criticism, that cannot be so easily dismissed as racism, would have added a provocative and thought-provoking layer to an otherwise admirably comprehensive portrait of a remarkable woman.