Home / LIFESTYLE / REVIEWS > / FILM REVIEWS / The end of an era: the last ever Star Wars film is a mixed bag 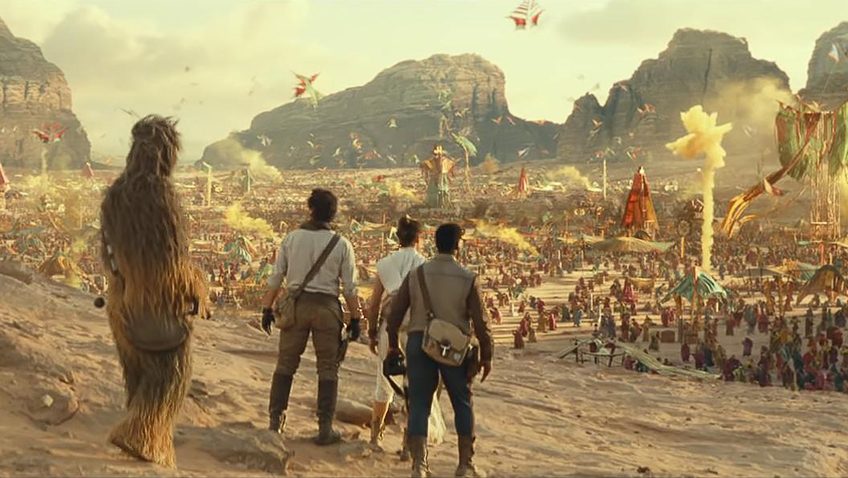 The end of an era: the last ever Star Wars film is a mixed bag

So, folks, this is it. The last of the 9 episodes of the Star Wars franchise and the end of an era that began 42 years ago with George Lucas’s Star Wars in 1977. It was released by 20th Century Fox 4 years after the Twin Towers were opened and 24 before the world changed with their destruction. With Star Wars: Episode V – The Empire Strikes Back in 1980, the cult of Star Wars swept across the globe. As we are reminded in Star Wars: The Rise of Skywalker

, this all happened a long time ago, in a galaxy far, far away…

But the history of the franchise after these first two films is nothing if not uneven, and you could argue that Star Wars: The Rise of Skywalker

is simply the end of the Disney trilogy, that began after its purchase of Lucasfilm (in 2012), and ends in 2019 as Disney adds 20th Century Fox to its own empire.

The Disney trilogy began with J.J. Abrams’ Star Wars: Episode VII – The Force Awakens in 2015. Its function was to revive the franchise and reassure fans with a nostalgia fest in terms of the story and the reappearance of Han Solo and Leia. In Star Wars: Episode VIII – The Last Jedi of 2017, writer- director Rian Johnson (Knives Out) reunited Mark Hamill and Carrie Fisher with a rainbow cast as diverse as the film was divisive for the hard-nosed fans, disappointed with Johnson’s direction and theories. It might be strange to have the words ‘The Last’ in the penultimate film title, and ‘The Rise’ in the final film’s title, but J.J. Abrams, who again directs and co-writes (with Chris Terrio, Argo; Batman vs Superman: Dawn of Justice) wants to leave fans on a note of optimism and hope.

That he does. But the Star Wars: The Rise of Skywalker

, or Rey’s (Daisy Ridley) turn at ‘Who Do You Think You Are’, is a mixed bag and a bit anti-climactic. The film opens with a rousing, if now familiar, dogfight as the oh-so-charismatic Poe (Oscar Isaac) and Finn (John Boyega) dart back to the rebel settlement in the Millennium Falcon, joking with one another like they were driving to the supermarket. When they land, we are reunited with Resistance leader Leia Organa (the late Carrie Fisher, looking like a wax work) and Rey, who is meditating in mid-air. She rushes back to hear the intelligence from the Falcon crew, and then bids farewell to her mentor, Leia. 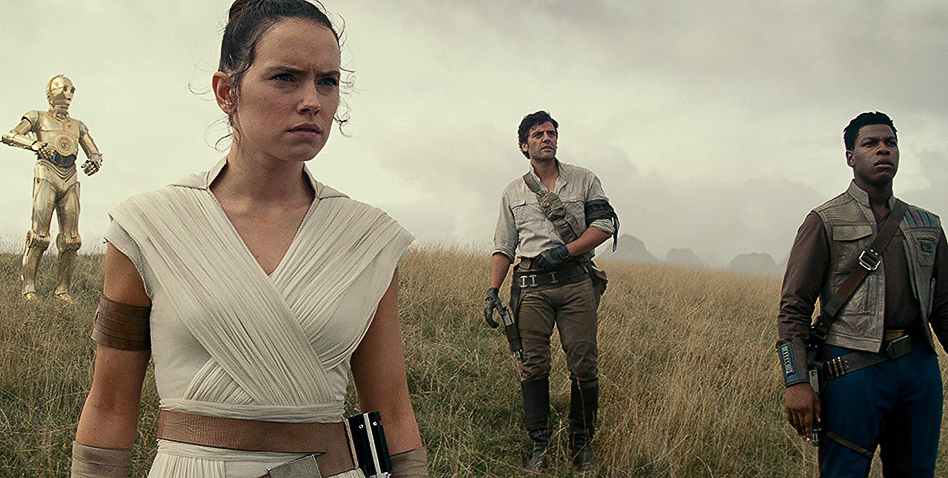 The news is that Palpatine, (played by 75-year-old Ian McDiarmid, looking 175) the evil Emperor of the hidden land of the Siths, Exogol, has somehow returned, still determined to end the Jedi and conquer the galaxy. And here I was still under the impression that Darth Vader killed him off in Star Wars: Episode VI – Return of the Jedi ‘a long time ago’.

But he has been resurrected (along with the ghost of Han Solo, played, of course, by Harrison Ford in an all-to-short cameo) for reasons which much be kept secret in any review. Palpatine is first heard promising The First Order commander Kylo Ren (Adam Driver, terrific), the title of Emperor if he will ‘kill the girl’ (a reference to Rey) and end the Jedi. But he warns Ren, ‘she is not who you think she is.’ When Ren asks who she is, he is met with silence. The suspense might not be killing you, but if you wait for just over two hours you will find out. Kind of.

Here’s what happens in the interim. Rey, now with developing telepathic skills, but faced with many seemingly insurmountable obstacles, has to find Palpatine. Rey knows that Luke was trying to do the same and decides to start where his trail went cold. The clue is to find the Wayfinder Crystal that will lead them to Exogol. So, the planet hopping adventures begin with Rey sometimes with her crew and sometimes on her own leading the way. Like Elsa in Frozen 2, there are things a superhuman leader in search of her identity has to do on her own. 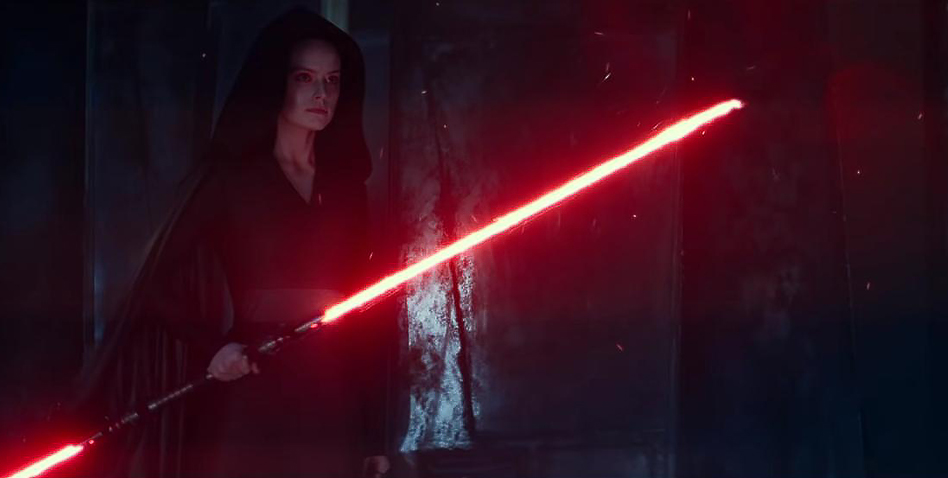 Along the way they land on a planet where a festival is going on that only happens once every 42 years – get it? Rey has one of several virtual – or perhaps this one is real – encounters with Kylo Ren. He is still stalking Rey in his mission to drag her over to the Dark Side that has already claimed him (despite being Han Solo and Leia’s son and Luke’s nephew).

At the festival they meet a droid named C-3PO (Anthony Daniels) that proves very useful when they find a dagger with cryptic writing that contains a big clue. Rey knows it’s the clue Luke was after. But the letters are rune. Though C-3PO can help, his programming prohibits him from translating the runic language. A little operation on his circuitry is necessary for the cause… 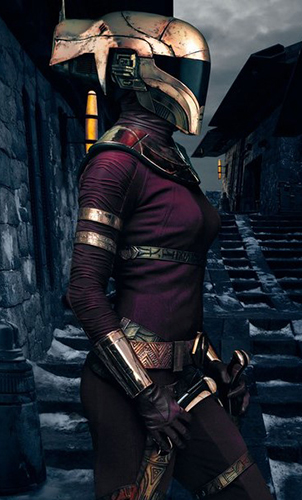 Rey discovers a new superhero power when she can hold back a space blimp in which the First Order has kidnapped the beloved Chewbacca (Joonas Suotamo) – only to have Ren show up to challenge her, with the craft exploding. Poe tries to reignite a romance with Zorri Bliss (Keri Russell), but can she forgive him deserting her for the Resistance? And we – and unfortunately, General Pryde (Richard E. Grant) – learn the identity of the heroic spy in the high ranks of the First Order.

The showstopper, and, when you see the emotional outcome, the early climactic scene, is the lightsabre battle between Rey and Ren. It is set on the massive grey steel wreck of the Death Star identified in the outline of the dagger and emerging from the soaring waves of a violent grey sea. If it looks like some of German artist Anselm Kiefer’s latest works on display at White Cube Gallery in London, hold that thought. Kiefer’s new multi-media paintings contain letters from the runic (old Norse) alphabet, the letters that appear on that dagger.

You might extend the Germanic myth-making a bit more, to the inhospitable cave where Rey has succumbed after a supercharged encounter and is swept up in the arms of a would-be lover/saviour in a kind of reverse Tristan und Isolde.

There is, however, one more big climactic battle scene going on at this time. The First Order’s strategy, which is the film’s big relatable message, is that tyrannical forces want any Resistance to feel isolated to break morale. But Poe has faith that Freedom will find friends when it needs them, even if Lando Calrissian (Billy Dee Williams) has to return for the first time since Star Wars: Episode VI – Return of the Jedi, to prove a point.

While Adam Driver imbues Kylo Ren with more complexity and emotional truth than the scriptwriters could ever hope for, its just a shame that he is paired with Daisy Ridley. While it’s great that Disney continues to give us films with strong female heroines, Rey has no personality and the stunning Ridley has no charisma. Her face is so inexpressive and her body so constricted, that she always reminds you she is play acting. There is a lot of good acting around her, but the heroine is miscast.