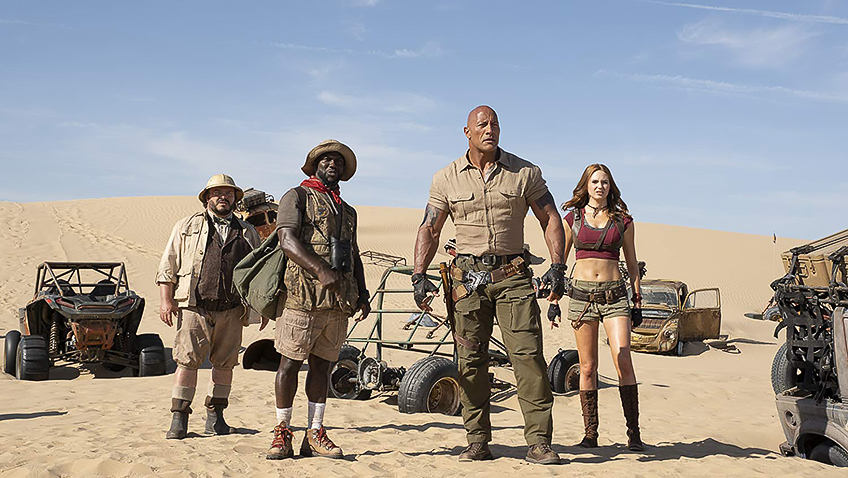 Septuagenarians DeVito and Glover raise the bar in this fun, but uneven sequel

With the huge success of Jumanji: Welcome to the Jungle, it was obvious that Jake Kasdan (and co-writing partners Jeff Pinkner and Scott Rosenberg) would be charged with a sequel. Here it is, Jumanji: The Next Level

, with the same winning cast, and a couple of new septuagenarians who take the film to another level. Despite this uplift from the talented Danny DeVito and Danny Glover, however, that level is still a bar below Jumanji: Welcome to the Jungle. A kind of musical chairs of avatar shifts is the distinguishing, if not always successful, feature of a story that resembles a spoof of Kasdan’s father, Lawrence’s Raiders of the Lost Ark.

The four high school students whose avatars taught them more about themselves than a decade of therapy in Jumanji: Welcome to the Jungle, have, three years on, gone their separate ways. When the film opens, they are reuniting in their hometown of Brantford during the Christmas break. Sitting around the table in Nora’s diner, are pretty, popular, social-media addict Bethany (Madison Iseman); the high school football jock Fridge (Ser’Darius Blain); and the intelligent, cynical but shy Martha (Morgan Turner). Missing from the gathering is nerdy, maladroit and asthmatic Spencer (Alex Wolff), who, with Smolder Bravestone (Dwayne ‘The Rock’ Johnson) as his avatar, learned to conquer his anxieties and become more confident and forceful in his first foray into the jungle.

Spencer’s new persona led to a romance with Martha that did not last the transition to the real world. Fridge, Martha and Bethany are doing well, but Spencer is lonely and miserable, working his way through university and humiliated by his boss in a low-paying supermarket job. But being home again is no better when he learns he will be sharing a room with his grandfather, Eddie (Danny DeVito) a grumpy, self-centered, cynic who is recovering from hip surgery and being looked after by Spencer’s mother (Marin Hinkle).

Eddie has become insufferable since his forced retirement, which he blames on his business partner and best friend Milo (Danny Glover), who sold their diner behind his back. When Milo knocks on the door one day, Eddie is surprised, and instantly suspicious. As Eddie guesses, Milo has not come over after all this time to cook him breakfast. But before he can tell Eddie the reason he has come (this comes in a touching ending), both men are sucked into the malfunctioning video game.

Here’s how that happens. Feeling low and apprehensive about his reunion with Martha, instead of joining the reunion, Spencer pays a visit to the basement where he discovers the video game that Fridge had broken after the first outing. This is the context of Jumanji: The Next Level

, which acknowledges the benefits of the game, and at the same time, the addictive, escapist nature of video games. 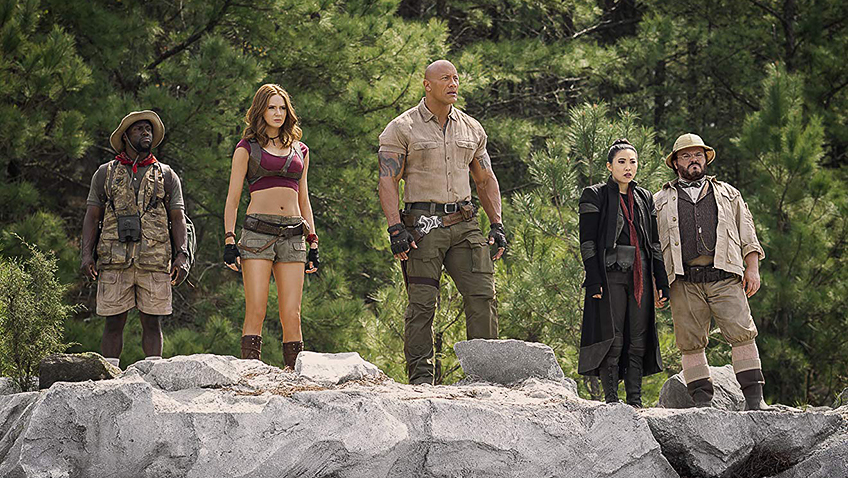 Spencer gets the damaged machine to work sufficiently to send him to the jungle where he was once the strong, confident Dr Bravestone who gets the girl he can only dream of in real life. This time however, as we see later on, his avatar is Ming Fleetfoot (well played by new cast member Awkwafina). Spencer’s new avatar has a tell-tale weakness of pollen but is otherwise unlike Spencer in more than her gender. The petite, Asian Ming is a skilled pickpocket and when the group meet up with her, she has dared to steal the Falcon’s Heart jewel from Jurgen The Brutal (Rory McCann, very good). Ironically, she is stopped by Bravestone, who does not realise that what she has stolen is what the team must find to save Jumanji this time around and get out of the jungle.

When Spencer fails to show up at the diner, the friends go to his home, encountering Eddie and Milo. They rush to the basement and quickly surmise what has happened. Though reluctant to return to Jumanji, they vow to do the right thing and save Spencer. But the game malfunctions and Martha and Fridge are sucked in along with Eddie and Milo, leaving Bethany behind in the basement.

Later in the film we see that Bethany has raced over to seek help from Alex Veeke (Colin Hanks) a family man, now, but a Jumanji veteran whom the team rescued during the first adventure. Bethany (whose new avatar is a black winged horse, literally being ridden by Alex) intervenes to save the friends from an attack, bringing them warm clothing for their assault on Jurgen the Brutal’s mountain fortress. 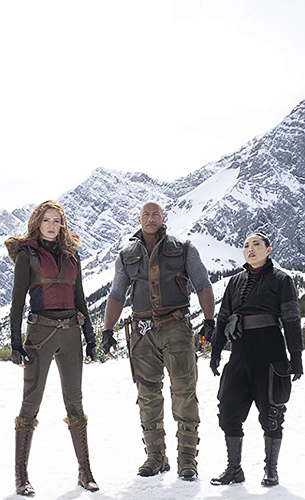 Dwayne Johnson, Karen Gillan and Awkwafina in Jumanji: The Next Level

Dwayne Johnson, who has established himself as a comic actor and was great as Spencer’s avatar in the last outing, fails to take advantage of the natural contrast with Danny DeVito. His inability to capture his mannerisms and voice – the accent is all over the place – are a disappointment, although it is funny to see “Bravestone” delighting in his big, strong body as though it were new. A running joke centres around Finbar’s inability to blurt out the zoological facts quickly enough to be of use and here, Hart is hilarious. When a curious giant ostrich approaches, they ask Finbar for information. By the time Finbar finishes his sentence that ostriches (a) travel in groups and (b) are going to attack, the stampede is underway.

Jack Black as the unathletic, fairly useless map reader Shelly Oberon is not particularly funny as the big, strong, fit Fridge’s avatar either, apart from the line ‘at least I was black’ – referring to his Finbar (Hart) avatar in Jumanji: Welcome to the Jungle. This is not really a stand-alone sequel. Martha retains her avatar as Ruby Roundhouse (Karen Gillan), presumably because Gillan is the only character who can get away with the inappropriate jungle and desert attire of a halter top and short shorts for this commando Amazon with martial arts skills second to none.

Men playing women, women (Bethany) and then men (Milo) as winged horses and black men becoming white men – anything is game, but the avatar switching is only as good as the actor’s ability to play two characters at once. The set pieces are accomplished, but despite the great ostrich stampede, the adventures are nothing we haven’t seen before, while the sight of Gillan and Johnson kissing while scaling a straight rock wall, is less romantic than creepy.