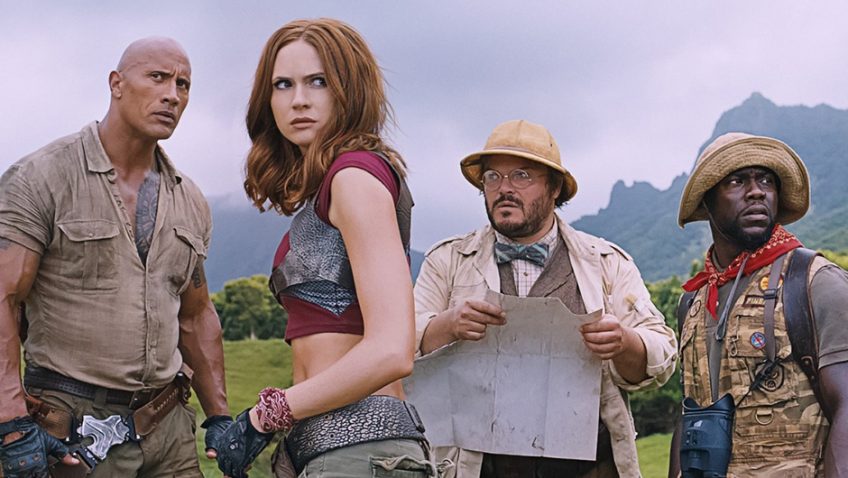 After 22 years, another chance to play Jumanji is welcome

No one who has ever lost themselves for hours on end in a fictional world can deny the power of narrative games from Clue to Forge of Empires to absorb the imagination. The challenge for director Jake Kasdan and his three scriptwriters is to absorb the audience into the game, just as the board-turned-video game Jumanji sucks in four teenage archetypes gathered for high-school detention. To a large extent this frequently humorous film does just that although it lacks imagination and disappoints with sexist outfit/character Ruby Roundhouse (Karen Gillan).

The 1995 film Jumanji, based on the book

by The Polar Express

illustrator/writer Chris Van Allsburg, saw Alan Parrish (Robin Williams) trapped in a board game he is playing with a school friend in 1969. He remains in the game for 26 years, until freed by two siblings who find the game and, without realising it, release him. Jumanji: Welcome to the Jungle

, pays homage to the original hit movie with several clever nods and links, while updating it with a video game that, in 2016, sucks the players in – rather than coming out to them.

First, however, we are in 1996, a year after the original Jumanji was set. Teenager Alex Vreeke’s (Nick Jonas) father finds a Jumanji board game in the sand when jogging on the beach. He gives it to his son who dismisses the relic and returns to his computer where he is absorbed in a motorcycle game. Overnight, the ornate box’s contents change into a video game cartridge, and when Alex puts it into his video player, he disappears into its circuit board. Cut to 2016. Alex’s house has since become a haunted shrine and meeting place where nerdy, brainy gamer, Spencer (Alex Wolff) hands football jock Anthony ‘Fridge’ Johnson (Ser’Darius Blain) the latest essay he has written for him in hope of gaining acceptance. Jack Black in Jumanji: Welcome to the Jungle

An alert teacher detects the fraud and the principal puts both students in detention where they are charged with cleaning the school basement with two other students. Bethany (Madison Iseman) is a mobile phone addicted narcissist and cheerleader sent to detention for talking on her phone during a quiz, oblivious to her classmates. Martha Kaply (Morgan Turner) is the shy, studious, outsider type whose courageous objection to participating in PE class impresses Spencer.

While clearing the basement the teens find a dusty video game and, identifying the unfamiliar console, begin playing it. They each choose an avatar from the screen without knowing what they look like. Bethany is assigned Shelly Oberon not realising that the cartographer, paleontologist and archaeologist is Professor Sheldon Oberon.

The electrical currents from the circuit board transport each student into the jungle where they realise they have become their avatars for real. Spencer, the scrawny, self-effacing nerd is a kind of Indiana Jones archaeologist/explorer named Dr. Smolder Bravestone, played by Dwayne ‘the rock’ Johnson. There is a high concept joke in this casting alone. Spencer’s female counterpart, the gym-hating, wall flower Martha’s avatar is Ruby Roundhouse, a commando and sexy dance fighter (played by Karen Gillan). The huge footballer ‘Fridge’ becomes Moose Finbar, a short, squeaky zoologist and weapons carrier for Bravestone. For maximum contrast, he is played by Kevin Hart. The real shock is reserved for pretty airhead Bethany whose avatar is a brilliant, chubby and decidedly unsexy man played by Jack Black. Karen Gillan in Jumanji: Welcome to the Jungle

Most of the humour derives from the ‘game’ actors playing against type. Jack Black’s Sheldon not only has to flirt with Seaplane McDonough, the avatar for Alex Vreeke, who has been stuck in the jungle for 20 years, but in a surprisingly funny scene, ‘she’ has to learn how men urinate – and survive not to mention how to survive without a phone. Johnson clearly revels at the opportunity to rival Arnie in Twins, but he gets into his action mode a bit too well for any trace of Spencer to remain very long.

Gillan manages to remain both Martha and to convince as her avatar Ruby, but her skimpy outfit is a letdown. It might help us believe the cartoonish character, but no professional would be so exposed in the jungle. When Bridget Jones got her heels stuck in the mud at a rock concert, her inappropriate outfit was played for laughs and was in character. Here, Ruby is eye candy.

A friendly chap in a jeep named Nigel (Rhys Darby) comes along to explain the task, which is pretty vague and not overly imaginative. A villain named John Van Pelt (Bobby Cannavale, overacting) stole the emerald eye off of a rock formation that resembles a jaguar and the group must find the statue and replace the stone it in order to save Jumanji. That Van Pelt sends out motorcycle-riding thugs with guns to hunt down the avatars is naturally incongruous in the jungle, but these link back to Alex Vreeke’s preferred motorcycle game so we have to put up with them. As soon as the avatars recognise their new strengths they use them to temporarily escape from the henchmen. They also have to contend with their avatars’ weaknesses and the usual mammals that are not as scary (or endearing) as in this year’s Kong: Skull Island.

A clever new rule of the game is well used to forward the escape plot. Each player has three lives and a tattoo on their wrists indicate how many they have used, enabling fast thinking Bravestone to sacrifice Moose, who has a life to spare, to a herd of rhino while he swoops down from reluctant pilot McDonough’s helicopter.

Jumanji: Welcome to the Jungle

is, like any good game should be, absorbing and fun with the added bonus of a clever script and some real laughs that do not depend upon puerile or scatological humour. On the other hand, the long sequence of replacing the Jaguar’s eye is unconvincing and one could well ask what a Middle Eastern bazaar is doing in a remote jungle. The teenagers each learn lessons about themselves some of which – Martha and Spencer’s sexual confidence and self-esteem – are pretty obvious, but nicely handled. Bethany is amazed how her other faculties have developed in the absence of a phone and, for one so selfish, it is touching when she risks her life for McDonough.