Home / LIFESTYLE / REVIEWS > / FILM REVIEWS / Though a bit flabby, this fun and witty superhero film will transport the entire family 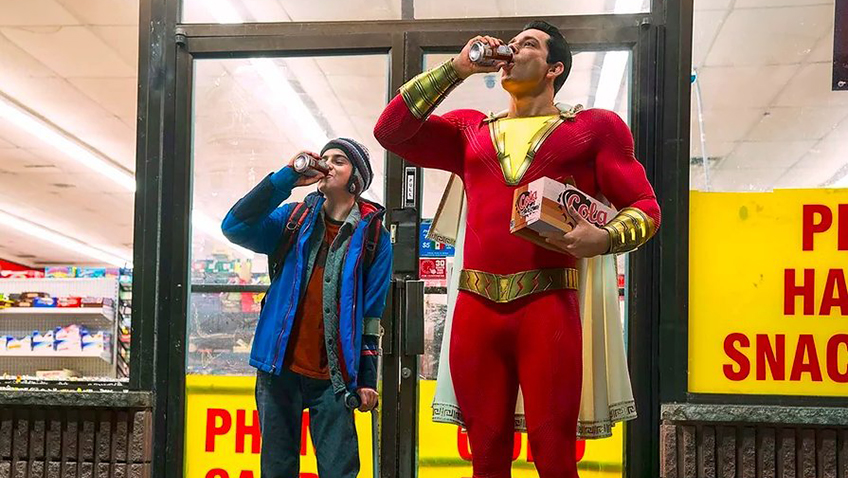 Though a bit flabby, this fun and witty superhero film will transport the entire family

and fly your family into the cinema for a real treat: a superhero movie that will transport all but the youngest ages to a fantasy world that is fun, witty, action- packed if a bit unwieldy. Two loving and wise foster parents and a very diverse group of fostered siblings give the film its heart and political correctness. Balanced as they are with scenes of child abandonment, bullying and humour, however, the film never gets soppy and overbearing.

Pity Shazam (Djimon Hounsou), an ageing wizard and lone survivor of the Council of Eternity. He has been trying to find himself a successor with a pure heart for a couple of centuries, while keeping the restless Seven Deadly Sins at bay. The Egyptian Mage first appeared on ‘the Rock’ in the Fawcett Comics (later DC Comics) in 1940 to give Captain Marvel his powers and here makes its cinema debut.

Director David F. Sandberg and scriptwriter Henry Gayden do a good job weaving together several disparate story threads in a film a bit too heavy with back stories. Only occasionally does it feels like the protracted expositional set up for the benefit of the long term franchise.

It is 1974 in upstate New York when Shazam’s latest candidate is whisked into the visually underwhelming Rock of Eternity. Meet Thaddeus Sivana (Ethan Pugiotto), a skinny kid with glasses ousted from the family car on a trip with his authoritarian father and his elder brother. They exclude him from their conversation, leaving him with his 8 Ball for company and seem not to notice his absence. Sivana is rejected as Champion when he fails to touch the Eye of Envy and is returned to the backseat of the car as magically as he left it. While attempting to return and explaining what happened to his exasperated father, the car is broadsided. The next time we see Sivana senior he is heading a board meeting in a wheelchair with his son by his side.

Rejected by both Shazam and by his father, Dr Thaddeus Sivana (Mark Strong) has dedicated his life to learning the secret of the Rock to claim the prize, even if that means siding with the spirits of the Deadly Sins who have their own agenda. 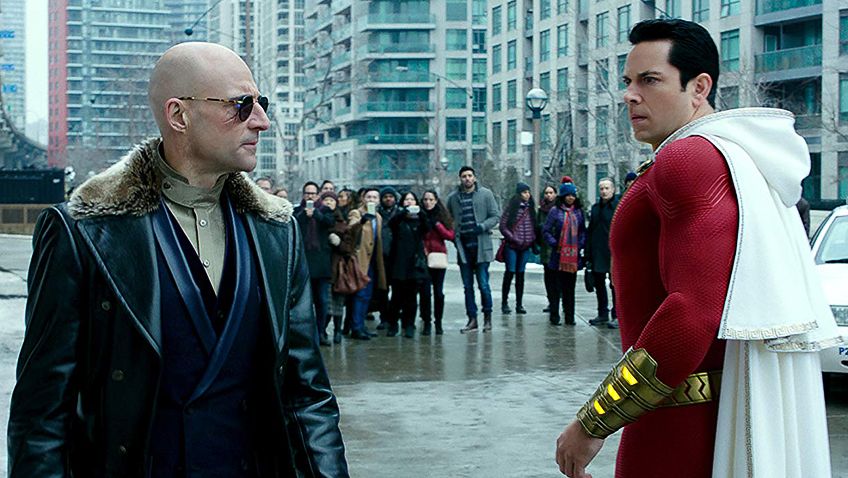 In present day Philadelphia Billy Batson (Asher Angel) is a juvenile delinquent skipping school and breaking into police cars. We soon learn what he is after when he obtains the addresses of all the Batsons in town in hope of finding his mother. In a flashback scene, reminiscent of the opening scene of Jordan Peele’s recent horror film Us, four-year-old Billy (David Kohlsmith) gets separated from his mother at a fair ground. Now 14, he has been searching for his birth mother ever since. Later in the film we learn why Billy’s mother never managed to find him.

This time, Social Services place Billy in a foster home like no other. The Vasquez’s (Marta Milans and Cooper Andrews) are a loving couple who are fostering a rainbow coalition of bright misfits. Freddie (younger and older Freddie are played by Jack Dylan Grazer and Adam Brody respectively), a disabled, nerdy kid of Billy’s age who is obsessed with superheroes, particularly Batman, shares his room with the newcomer. Mary (younger and older Mary, played by Grace Fulton and Michelle
Borth respectively) is a pretty, responsible, mature high school senior reluctant to accept an offer from a high ranking university because it is too far from home. Eugene Choi (played by Ian Chen and Ross Butler) spends his time with computer games rather than people, while Pedro Peña (Jovan Armand and D. J. Cotrona) seems marked by some childhood trauma because he is so introverted. An adorable Afro-American girl, Darla Dudley (Faithe Herman and Meagan Good), is, by contrast, a born extrovert, bursting with energy and confidence and several funny lines. 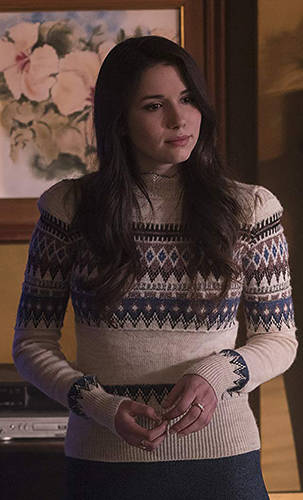 A bond grows between Freddie and Billy not only because they share a room and go to school together, but because neither has had a friend before. When Freddie is bullied at school, Billy comes to his aide though outnumbered. He is chased by the thugs and eludes them by jumping into the subway. But when he exits, he is not on a subway platform but on the Rock of Eternity being sworn in as the Wizard’s Champion. After holding onto the Wizard’s long wand and shouting Shazam! Billy (Zachary Levi) is a muscle bound man in his late 30s in a superman-type costume.

This is where the story comes into its own and, while borrowing from other children’s and superhero films, results in something original and deeply satisfying. A lot of the humour comes from the fact that Shazam’s appearance belies the immature teenager inside him. On one occasion, he buys some beer to share with Freddie only to discover they hate the taste and end up with soft drinks and junk food.

Billy and Freddie have a blast discovering and chronicling Shazam’s many super powers, a bit like Spider-Man and Harry Potter discovering their powers and how to use them. In a mock box ticking video, Freddie and Shazam go into a warehouse and video Shazam’s catalogue of powers which Freddie uploads for Shazam’s fans. Unfortunately, Sivana learns about Shazam as well, and, more problematically, he learns that Shazam has a vulnerable family.

Billy’s newfound celebrity and power go to Shazam’s head and he starts showing off before crowds, flaunting his superpowers like a one man Cirque du Soleil. When he humiliates Freddie in the process, the film points to the harmful effects of celebrity and how powers can be wasted by those too immature to use them wisely. 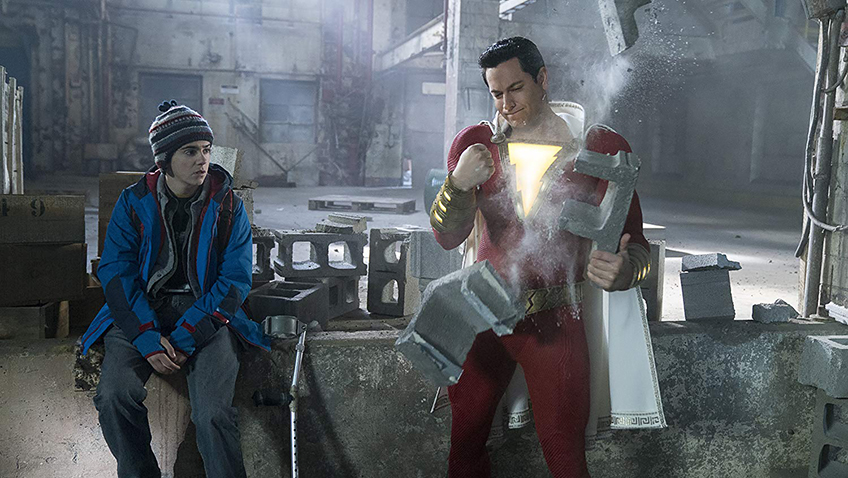 Toward the end of the film Billy’s voice begins to take on the unmistakable pitch and twang of Tobey Maguire. There are echoes of Big and, of course, Ant-Man when Billy realises that he can switch between adult Shazam and school boy Billy. This is the perfect way to prevent his foster parents from discovering a superman in their house or to confound Sivana who has by now unleashed the powers of the Deadly Sins who serve as his killer army. Out for revenge, Sivana first targets his father and brother before dealing with Shazam. You will have to see the film to discover if Billy is able to grow up fast enough to save the world from the destructive Sivana.

Along with all the fun, there are some flaws. Not all of Billy’s new siblings carry the same weight and a few loose ends are left dangling. Parts of the film, particularly the long finale, cry out to for some editing, and (spoiler alert!) the transformation and empowerment of Billy’s new siblings, while true to the original comic and recalling the family of superheroes in The Incredibles, might end up taking the magic out of Billy/Shazam while expanding the potential for storylines and spin-offs. And there is no disguising the fact that Sivana is a disappointing villain. Sivana and Batson begin as two very real rejected kids from different socio-economic backgrounds, but Sivana remains one-dimensional and unreal, with the eye of Envy in his eye socket and a tell-tale scar across his face reflecting the medieval belief that evil inside is reflected on one’s face. We expect much more from Mark Strong.