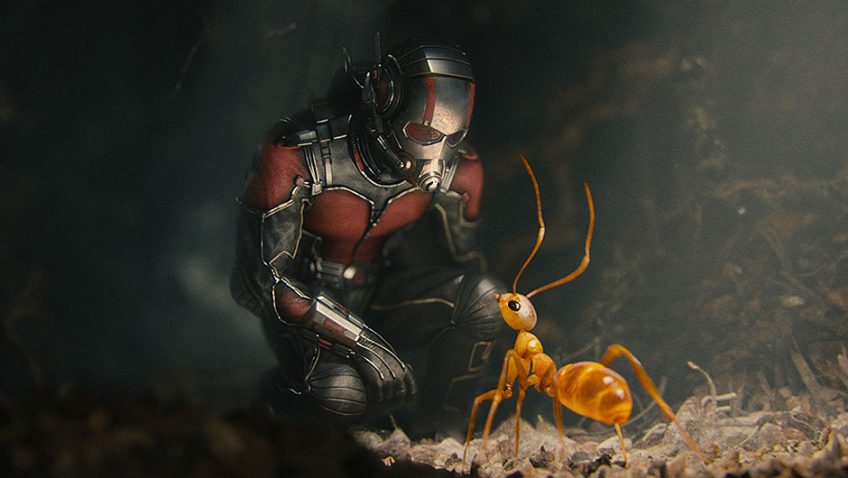 This latest addition to the Marvel Film world has great special effects, but a disappointing script

There is no reliable data about the demographics of Marvel comic reader, but the surviving creators of comics such as Iron Man, Thor, and Ant-Man, Stan Lee, and his brother Larry Lieber, are 92 and 83 respectively – and still working. While Ant-Man

is Marvel Comic’s first feature film, the character has been around for 53 years.

What is more interesting, is that no one in the principal cast of 51-year-old Peyton Reed’s 3D heist movie, Ant-Man

is under 35. Paul Rudd (46) as Scott Lang/Ant-Man and Michael Douglas (70) lead a cast whose average age is 44. In addition, we glimpse laboratories throughout the film staffed with (mostly) men who are middle-aged or older.

These details might be incidental, but those who will enjoy Ant-Man

the most might just be the youngsters (certificate 12a) who will thrill to the ‘Honey, I shrunk the adults’, CGI action sequences as opposed to the more sobering memories of the Jack Arnold film, The Incredible Shrinking Man that older audiences might bring to Ant-Man

Older youngsters might be put off that in place of the hunks and heart throbs that populate other Marvel films, such as Liam Hemsworth, Hugh Jackman, Michael Fassbender, and Mark Ruffalo, here we get boy-next-door Romcom/Bromance star Michael Rudd as Ant-Man/Scott Lang, who has not beefed up for the role.

Brilliant scientist Hank Pym (Michael Douglas) realises he has opened a Pandora’s Box with his Pym Particle, or shrinking serum. Idealist to the core, Pym vows to hide it from his unscrupulous former protégé Darren Cross (Corey Stoll) who has ousted Pym from his own company and sewed up a deal with nasty military regimes for the product.

What Cross lacks is the ‘shrinking suit’ (after all, what is iron man without his suit?), although his lab is working on this technology and close to a break-through. Pym’s estranged daughter Hope van Dyne (Evangeline Lilly) is Cross’s right hand woman, but increasingly alarmed by Cross’s ethics and mental state, has taken to spying on him for her father. Although there is zero chemistry between the two, Hope and Lang’s (Rudd) relationship quickly turns from animosity to romance.

Meanwhile, recent ex-con Scott Lang is proving difficult with his criminal record. But his ex-wife Maggie (Judy Greer) and her new fiancée, Paxton (Bobby Cannavale), deny him visitation rights to his daughter Cassie until he can pay child support. So when his pal Luis (the wonderful Michael Peña) proposes an easy burglary at the home of a rich old man, Lang reluctantly agrees.

Little do Lang and Luis know that Pym has staged the burglary at his own house as a means of getting Lang to try on the ant suit. Pym has identified Lang, a former electrical engineer and Robin-hood burglar, as the perfect man to dawn the shrinking suit planted in his safe and execute his daring plan to break in to Cross’s lab and destroy his prototype suit. While Rudd and Michael Douglas are a pleasure to watch, there is a feeling that the back-story to the main action has not been thought through all that clearly.  We find out in a throw-away line that Pym once operated in the suit when he was younger, and that Lang’s burglary was actually a computer hacking.

He returned money to the customers of a fraudulent firm, keeping nothing for himself. If this were the case, where is the press to pick up on the story at his release, and why do his ex-wife and her new partner, who know the truth, shun him as though he were a hardened criminal? Nor do we ever learn why an electrical engineer with proof of fraud could not simply notify the police’s fraud arm and let them do the detecting.

Similarly, Lang mentions that he was a ‘cat burglar’, which is very different from a principled computer hacker. And, indeed, for anyone to pull off the acrobatics that Lang does when he puts on the Ant-Suit, he would have to have the physical agility that you do not get from sitting behind a computer or in a prison cell.

Then there is the question of the ant army itself. The title refers not only to Lang’s size when he puts on the suit, but also to the fact he can communicate with ants and command armies of them.   Surely this unlikely scientific breakthrough is an achievement as great as the shrinking serum, yet, scientifically, at least, unrelated to it?

And yet, this amazing achievement is tossed off by a simple explanation and a hearing aid-type device that Pym reveals. Presumably, this is worn along with the suit. Of course, this technology has its additional challenges when one considers that the average ant lives for 45 days. Surely this makes training them (not to mention bringing one home as a pet for Cassie), a rather questionable exercise.

The presence of Rudd as Scott Lang/Ant-Man, and the fact that, unlike the Incredible Shrinking Man, Lang can change his size at will, suggests there will be humour, heart and wit in the film. Alas, the humour and wit we should expect from the four credited script writers, Edgar Wright (Shaun of the Dead, The World’s End) and Joe Cornish (Attack the Block), Adam McKay (Anchorman) and Paul Rudd (This is the End, Knocked Up, Forgetting Sarah Marshall) is too faint to compensate for the lack of tension in the thriller department. This could be due to the ‘creative differences’ which caused Wright to leave the production when he was scheduled to direct. Either Adam McKay, whose low-budget zombie comedy, Attack the Block was such a pleasant surprise, was not given the opportunity or he walked as well.

Peyton Reed might have received pretty dire reviews for his comedy-star-vehicles Yes Man and The Break-Up, but they were big box office successes. It is uncertain whether Ant-Man

will be a comparable success with its £130 million budget. What is certain is that Marvel are determined, for merchandising reasons if nothing else, to add Ant-Man to their stable of superheroes.   At the end of the closing credits audiences will learn out Ant-Man is due to reappear in next year’s Captain America film, Captain America: Civil War.