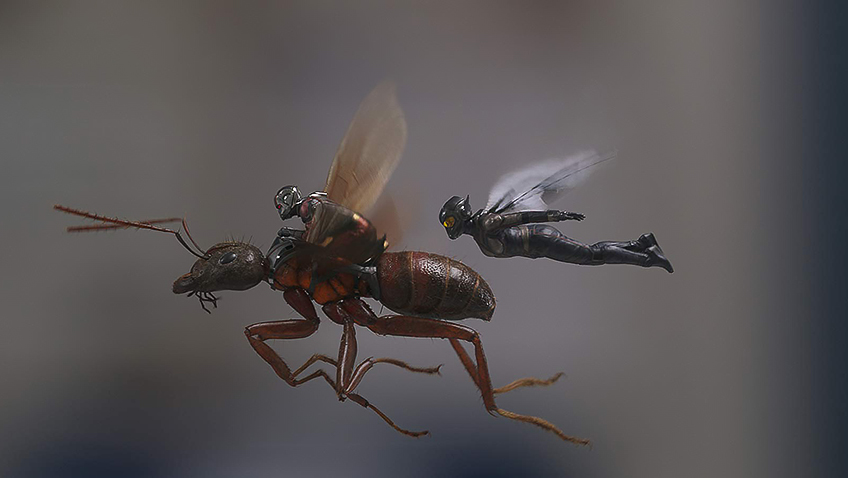 A superlative sequel that sheathes a flimsy plot with family, fun, feminism – and good acting

If you saw Peyton Reed’s 2015 Ant-Man – the first Marvel feature film dedicated to the Stan Lee’s tiniest superhero – you were probably not waiting with bated breath for the sequel. There were more holes in the plot than in a 70 kg loaf of emmental cheese, and, despite the impressive line up of comic writers, there was little wit and humour. The chemistry between Hope van Dyne (Evangeline Lilly) and Scott Lang/Ant-Man (Paul Rudd) went unnoticed and neither Michael Douglas nor Rudd did much acting. So what a pleasure it is to announce that Peyton Reed has turned the series around. He has addressed all of Ant-Man’s shortcomings and has delivered what must be the best sequel of the year, and arguably one of the best superhero movies of the decade.

Any review of this film has to start with the title. This is the first Marvel comic film to feature a female superhero in the title, and she does not disappoint. Hope Van Dyne (Lilly) has outgrown the evil villain Darren Cross in Ant-Man and returned to her father’s (Douglas) lab where they become close. Hank Pym is proud of his daughter.

Their relationship with Scott Lang is another matter. Two years earlier, when he flew off to join Captain America (in Captain America: Civil War) in violation of the controversial Sokovia Accords – which were to establish a United Nations panel to oversee the Avengers – they severed ties with Lang.

When he returned, he negotiated a plea bargain and is put under house for two years under the watch of FBI agent Jimmy Woo (Randall Park). Professor Pym and Hope have gone into hiding. They have lost everything – except the hope of finding Janet (the original Wasp, played by Michelle Pfeiffer) in the Quantum Realm where Pym and Hope lost her.

In 1987 Janet shrunk herself in a courageous act in order to disable a Soviet nuclear missile. She became trapped in the sub-atomic quantum realm and was assumed dead. Pym and Hope briefly opened a tunnel into the quantum realm, but their research was compromised by actions and they operate out of a portable lab. 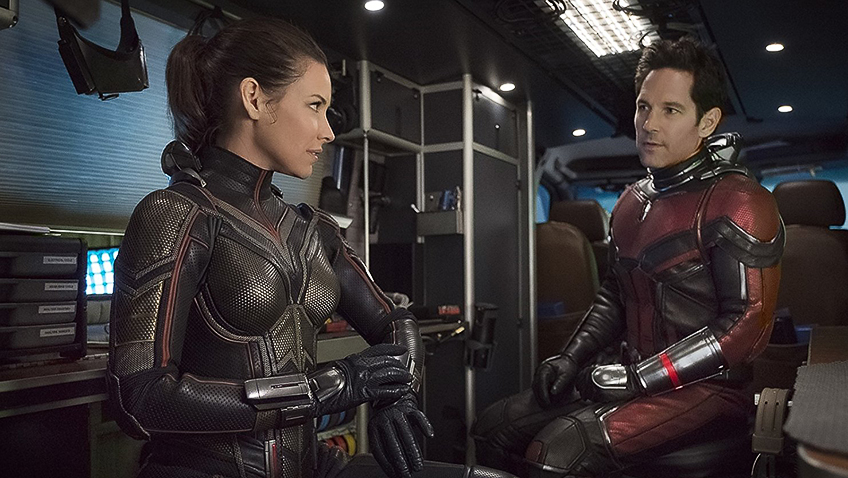 Paul Rudd and Evangeline Lilly in Ant-Man and the Wasp

The frost between Lang and the Hank and Hope melts gradually when Lang realises that he has received a message from Janet with whom he has become quantumly entangled. He calls Pym. Hope comes into her own -using superhero skills that were barely apparent in the original film – to kidnap Lang and plant a decoy in his home to pacify Woo. The Wasp demonstrates her fighting prowess and intelligence when she goes to buy a part for the tunnel from a black market dealer, Sonny Burch (Walton Goggins). Burch realises the value of what Hope is doing and ups the price.

Sleazy Sonny is no match for Hope, but things get complicated when a third party enters the fray and sends the Wasp spinning. Ava Starr (Hannah John-Kamen) is dying because she is a woman with molecular instability who needs reenergising from the Quantum Realm to stay alive. The sex of this character, ‘the Ghost’ is not specified in the original Marvel comic, but here she is another strong female, joining Janet, Hope and Cassie. 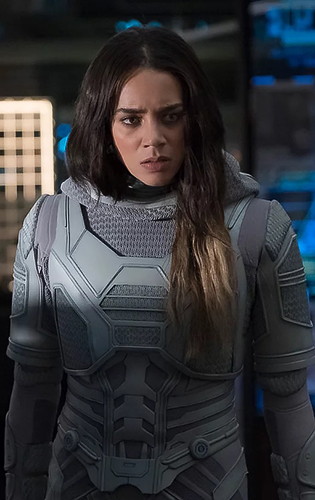 Hannah John-Kamen in Ant-Man and the Wasp

Though she is waning, the Ghost is super strong and can pass through solid objects making it difficult to fight with her or escape her. Ava is one of a growing number of ambiguous blockbuster villains. She is thwarting Hope Van Dyne’s and Pym’s plans, but not for money, envy or out of pure evil. She is desperate to zap into the molecules of an emergent Janet to stay alive. Another ambiguous obstacle between the reunion of Pym and Janet is the emergence of Ava’s friend and carer, Bill Foster (Laurence Fishburne). A former colleague of Hank Pym who is now a rival, with bones to pick about Hank’s working methods. Foster wants to help Ava live, but he is perhaps the most moral of the whole lot and tells Ava that he will not help her if it means destroying Janet.

In addition to turning the Wasp into a fully fledged super hero and developing the father/daughter bond, Reed devotes a lot of time to Scott Lang’s character arch. When the film opens it is Lang’s turn to spend the weekend with his and ex-wife Maggie’s (Judy Greer) daughter, Cassie (Abby Ryder Fortson). Lang uses his creativity, and the good will of his partners-in-crime-turned- security consultants Luis (Michael Peña), Dave (T.I. Harris) and Kurt (David Dastmalchian), to entertain Cassie by turning his house into an amusement park that looks really fun.

Lang’s father/daughter relationship with Cassie is developed in parallel with that of Hope and Hank and the writing of these roles, too, sparkles with a winning mix of recognisable sentiment, wit and humour. Nor is Cassie a obnoxious brat that you are happy to see the back of. She is truly charming: a chip off the old block.

Reed too has realised that we all wanted to see more of Michael Peña’s Luis as it is always a sin to waste such a consistently good (and funny) actor. So Luis and the X-Con Security Consultants have a role to play, not only in outsmarting Sonny Burch and the FBI in a hilarious running gag, but in helping their boss keep Ava at bay while Hank goes down the tunnel to try to find Janet. 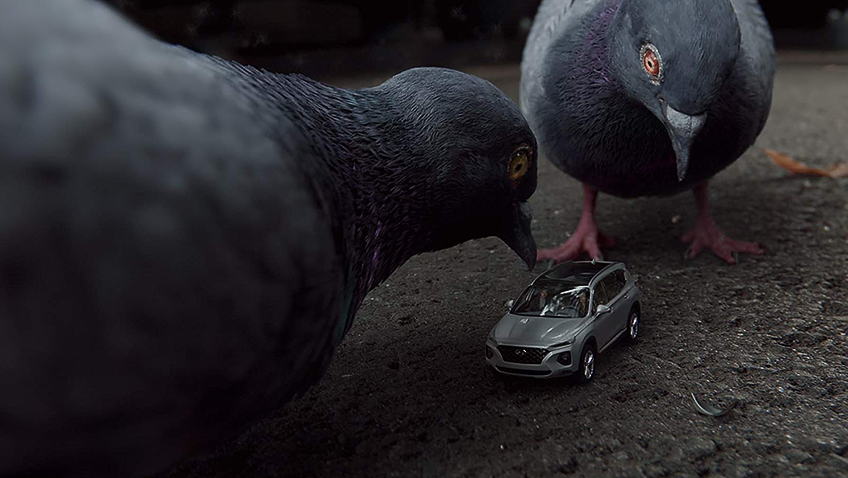 You might be a tad disappointed by the depiction of the Quantum Realm itself, in which Lang has dabbled and through which Hank Pym travels, happy to risk his life for the remote chance of finding Janet alive there. The realm is basically set pieces from a raft of space movies transferred to an underwater-like kingdom; though in fairness, it is unlikely to conjure up memories of Disney’s/Pixar’s Finding Nemo.

Boiled down to its essence, the plot is no thinner than the other Marvel comic stories that hit our Imax screens like goals in a French football match, and there might be too much shrinking and inflating (at one point, that darn malfunction of the Ant Suit turns Lang into a conspicuous giant) for some viewers’ taste. But if you like your super-hero movies fun and light-hearted, as opposed to dark and brooding, this is for you.

For Marvel Universe fans, eager to see the Ant-Man in league with the Avengers again, stick around for the closing credits, which are very long given all the CGI credits to get through.