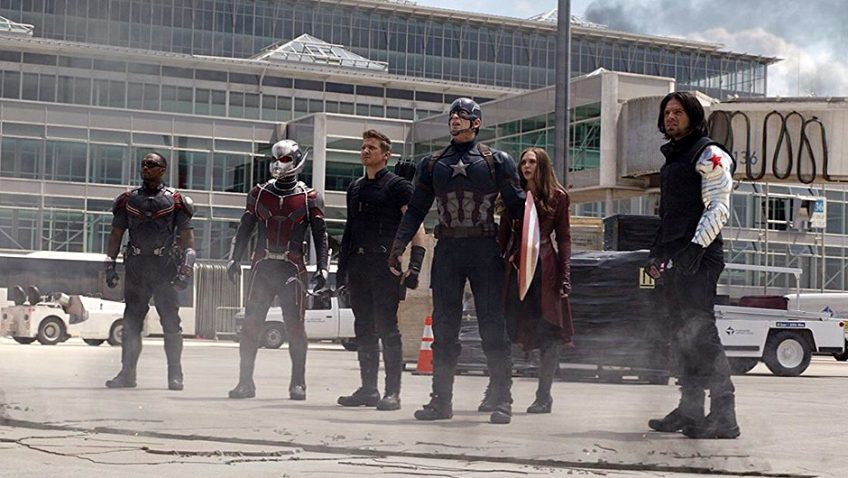 , might be a loud, violent, Imax CGI and live action globe-trotting extravaganza, but there are some great performances and it’s not just for kids.

Even if you never read the comics as a child, as an adult you can enjoy the symbolic dual nature of the familiar Marvel characters and the intelligent dramatisation of the topical issues at the heart of the film.

Collateral damage and the accountability of security forces; the benefits of maintaining a united front; standing by your friends; and the destructive energy of revenge and infighting are some of the weighty themes behind Captain America: Civil War

’ are, save 19-year-old Tom Holland as Spider-Man, all over 30.  The majority are in their 30s but no concessions are made for the several older actors in the cast. Jeremy Renner (45) is Hawkeye, the archer with perfect eye sight who is happy for a break from retirement and family life.

Paul Rudd (47) is the flexible size changing Ant-Man/Giant Man. Paul Bettaney (44) is the android, named Vision; and Robert Downey Jr (a staple in the comic book adaptations since Iron Man in 2008), is Tony Stark a technical wizard and strong man at 51, an age at which many are considered dinosaurs or unfit for professional service.  He is the only man capable of challenging Steve Rogers AKA Captain America (Chris Evans) in direct combat, despite being more than twenty years his senior.

William Hurt (66) plays Secretary of State Thaddeus Ross, without whose decision to regulate the unbridled and out-of-hand activities of the Avengers, there would be no story and no film.

The film opens with a flashback to Siberia, 1991 where Bucky Barnes (Sebastian Stan), known as The Winter Soldier is being revived from a long induced sleep by Hydra and transformed, by a stream of random words, into a killing machine. His first job as a brainwashed assassin is to crash into a car to obtain from the boot five blue packages.  Later we learn that these contain super soldier serum which could create many clones like The Winter Soldier. 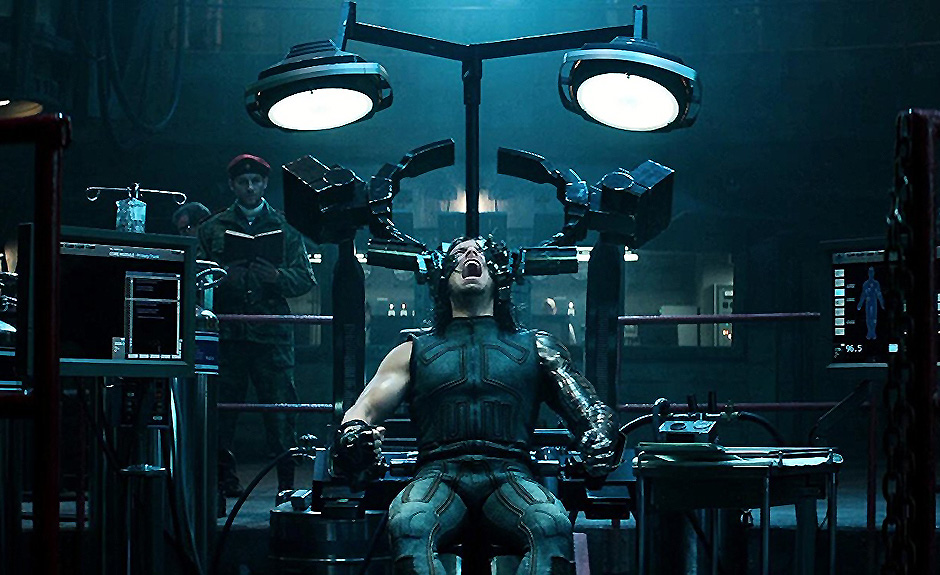 It’s worth remembering that Barnes is Captain America’s best friend from their WWII days who was believed to have been killed in action. As The Captain America films have an educational value, it is also worth noting that the epithet ‘Winter Soldier’ is inspired by Thomas Paine’s famous rallying cry to George Washington’s beleaguered troops in the American Civil War. It is ‘the summer soldier and the sunshine patriot’ who shrink from the service of their country when times get hard.

We also learn that a man poisoned by revenge, Helmut Zemo (Daniel Brühl) wants to get hold of the command words and the serum in order to destroy the avengers.  He impersonates prison psychiatrists and goes by several aliases in his quest.

Meanwhile, back in the present ,Steve Rogers/Captain America (Chris Evans); Natasha Romanoff/Black Widow (Scarlett Johannsson); Sam Wilson/Falcon,; (Anthony Mackie) and Wanda Maximoff/Scarlet Witch (Elizabeth Olson) are in Lagos, Nigeria where they must prevent a group of terrorists from stealing a biological weapon.

During the battle, a building containing Wakandan relief aid workers is bombed. Parallel to this, Tony Stark is delivering a lecture at MIT when he is approached by a woman whose son was killed during when the Avengers took on Ultron in Sokovia. She blames him personally for her innocent son’s death.

During a postmortem to the Sokovia fiasco, Secretary of State Thaddeus Ross informs the avengers that the United Nations is planning to pass the Sokovia Accords in Vienna. He invites the Avengers to appear and agree to the regulation that will be imposed on their hitherto unbridled actions.

The Avengers line up behind Steve Rogers and Tony Stark.  Rogers is against regulation because he believes it is precisely their neutral position that enables them to act without reference to political manipulation and conflicts of interest.  Stark, although CEO of a huge corporation, supports regulation; influenced by his encounter with the mother at MIT. The debate is well argued on both sides and students studying the components of arguing and persuading as part of the English language curriculum might pick up some pointers.

A terrorist bomb attributed to Barnes explodes in the Vienna meeting hall killing the King of Wakanda. His son T’Challa/Black Panther (Chadwick Boseman), vows revenge and eventually allies himself with Stark’s team, revealing superhero powers.   Rogers, whose relationship with Barnes goes way back and his ally Falcon decide to bring in Bucky themselves, without deferring to their commander, Ross.

Much of the film involves in-fighting between the two sides who realise they need more bodies and skills to enhance their divided teams.  Tony Stark blackmails schoolboy Spider-Man (Tom Holland), while Rogers calls Hawkeye out of retirement and appeals to Scott Lang with his unique ability to change size in an instant. 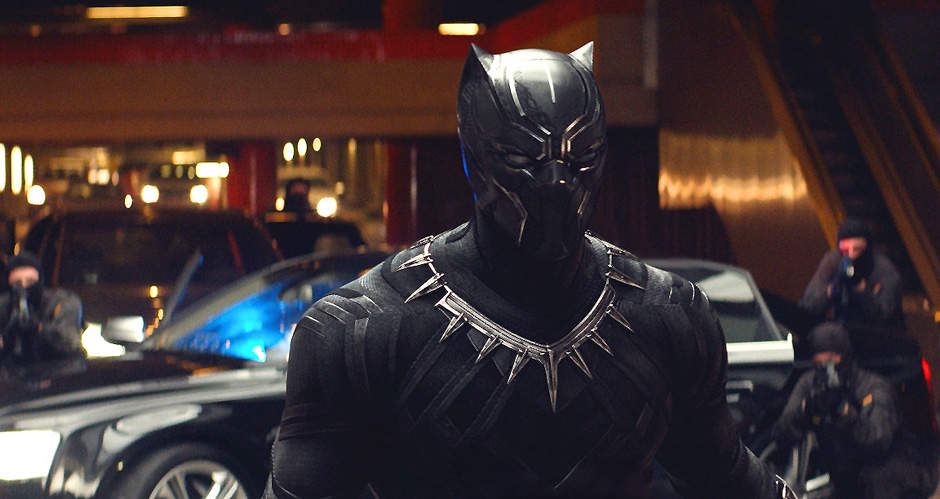 While battling for their principles is what Superheroes do, they are overlooking the power of a deadlier evil than regulation.   Zemo, whose revenge is related to the Avenger-caused collateral damage, knows that he lacks the strength to take on the Avengers and that no one can kill Rogers and Stark. But in theory, they have the ability to kill one another, and Zemo has the smarts to entice them to take the bait.

While the script writers of the last three Captain America films, Christopher Markus and Stephen McFeely are relatively young men, their work is based on the comics written by the late Joe Simon and Jack Kirby who were born in 1913 and 1917 respectively. Regulation and collateral damage might be more modern concerns when applied to Superheroes, but the universal values of the characters remain.

Every frail, runt-like Steve Rogers has the capacity to become a Captain, a leader. Meanwhile the very powerful, like the android Vision, an android, grappling with what it means to be human, can be transformed by the power of love. Barnes has to come to terms with the deadly deeds he committed even if under duress and orders from evil forces. Both Black Panther and Helmut Zemo experience the destructive nature of vengeance and the power of forgiveness.