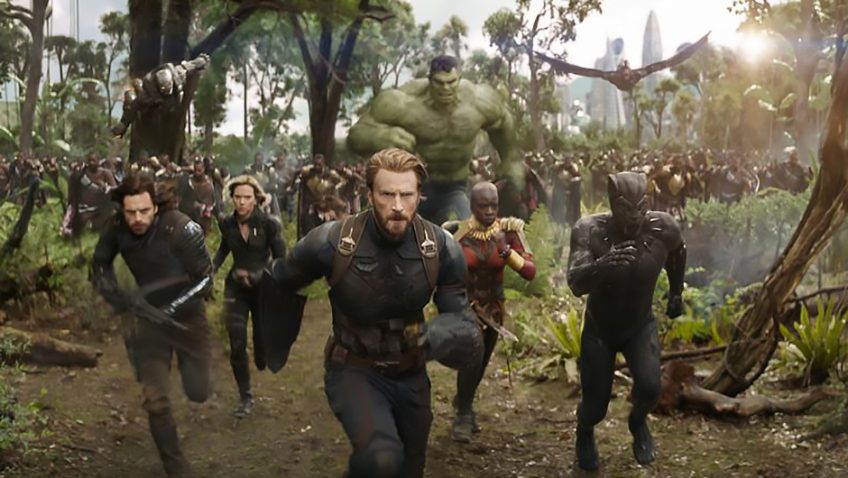 An impressive, emotionally anaemic, over stuffed reward for Marvel fans

, Anthony and Joe Russo’s (taking the franchise over from Joss Whedon) super expensive, super long, super-stuffed super movie has a villain, Thanos (Josh Brolin), whose mission is so evil, urgent and irreversible that it requires not just the usual six or eight, but the entire universe of Marvel superheroes to stop him. But do they? This is what you will have to find out for yourself as ‘Thanos Demands Your Silence’ warnings surrounded our screening. The complexities of this Avengers’ enterprise are as daunting as the opportunities to dazzle with references to some 30 films and many more characters. Each character brings something (several in cameo roles) unique to the mission, but only Thanos a central role.

where demi-gods, gods, strong mortals and giants risk love, life and limb to obtain a stolen ring to command the Universe. Thanos, who looks like he’s been carved out of the side of a mountain and forgot to leave the mountain behind, wears a bracelet on his left hand designed to hold the various infinity stones (Space, Mind, Reality, Power, Soul and Time). Curiously, when he acquires them over the course of the film, he knows instantly how to use their powers. This fits in with the random nature of all the powers in the film. This is a problem as it is hard to create suspense when the audience has no idea of who can do what and what the consequences will be.

Thanos’s only form of conscience is Gamora (now a Guardian) whom he saved and raised as his daughter when he destroyed her planet. Sadly, the sacrificial father/daughter scene between Thanos and Gamora is nowhere near as moving as the powerful scene between Wotan and his daughter, Brünnehilde in the opera.

If you are seeing the film in IMAX (recommended) the slightly destabilizing effect of that system is complemented by the absence of a fixed setting. We travel not only through time, but through space with characters who planet-hop and cross the earth as though crossing the street. Captions help to orientate us and the Russo brothers admirably differentiate each location as though it were lifted from the original respective Marvel film, but you can lose perspective. The attention to detail in recreating the locations (complete with lighting and atmosphere) is mind-boggling, but if you stay (recommended) for the endless end credits you will see what it takes. 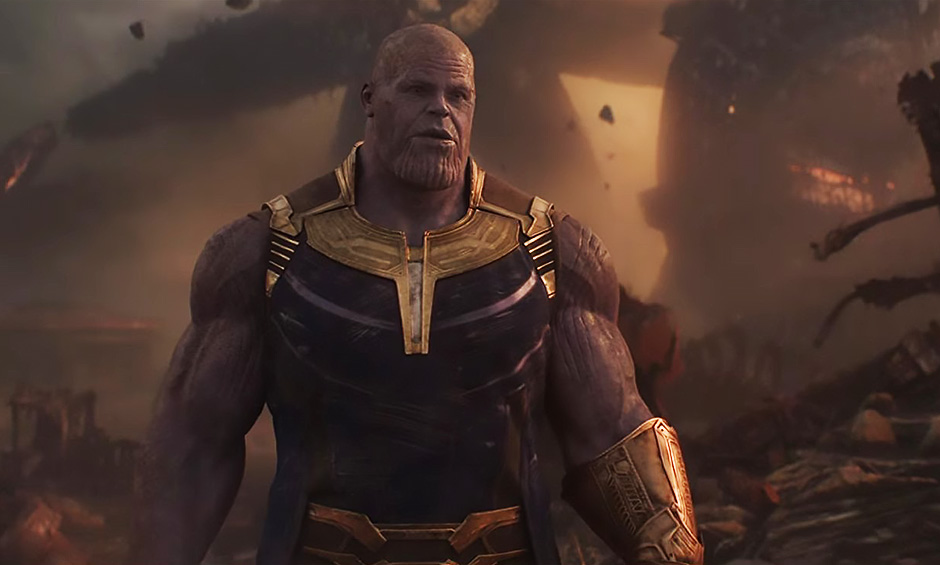 There are jokes, but this film is dark. In a prologue Thor (Chris Hemsworth) and his brother Loki (Tom Hiddleston) are being tortured by Thanos. Later on, Nebula (Karen Gillan), whom Thanos adopted along with Gamora (Zoe Saldana), is strung up in the air and pulled apart in a particularly barbaric form of torture. The film nonetheless has a 12A rating, presumably because we are not supposed to believe any of it.

The action proper begins with a space ship shaped like a huge metal ring, creating mayhem in Manhattan where Thanos has despatched the sickeningly ghoulish Ebony Maw (Tom Vaughan-Lawlor), the most powerful assassin in the Black Order, to deal with Stephen Strange (Benedict Cumberbatch). Maw seems too chichi to match not only wits but powers with the doctor, but when Dr Strange is taken by the space ship, it eventually become an opportunity for some welcome banter between his saviours Tony Stark (Robert Downey Jr) and the young, slightly overwhelmed Spider-Man (Tom Holland). The meeting of Stark and Strange in part replaces the temporary absence of Steve Rogers/Captain America (Chris Evans), whose rivalry with Stark on ideological and personal grounds in Captain America: Civil War, has not been healed. 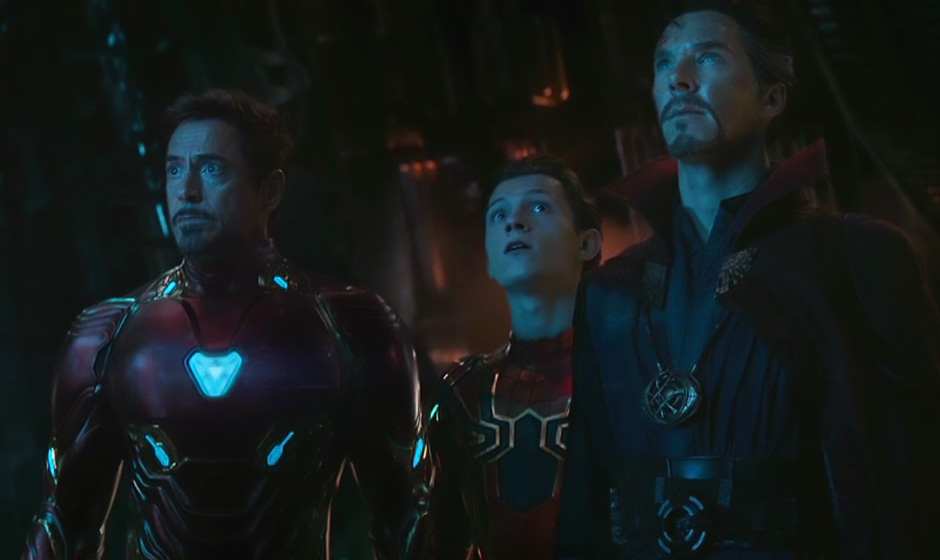 We are soon ‘In Space,’ symbolised by the interior of an anarchistic spaceship where we find pockets of familiar characters and Superheroes, including the genetically engineered raccoon mercenary, Rocket (Bradley Cooper/Sean Gunn); the tree-humanoid, Groot (voice of Vin Diesel) Drax the Destroyer (Dave Bautista) a member of the Guardians (of the Galaxy) whose family were killed by Thanos; Peter Quill/Star Lord (Chris Pratt, very funny) and his would be lover Gamora (Zoe Saldana) whose uncertain romance began in Guardians of the Galaxy.

When Thor crashes onto their spaceship, like a deer on a windshield Drax admires his torso (‘It’s like a pirate had a baby with an angel!)’ while the egotistical Star Lord is reluctant to acknolwedge his rival’s better looks. Thor however, is not there to win a Mr Universe competition but to commandeer the Guardians to the urgent cause. In this context, he does utter one of the key lines of the film when, after announcing that his brother died, he responds to the comment ‘that’s tough,’ with a philosophical, ‘Well, he’s been dead before.’ Hold that thought as the death count mounts. 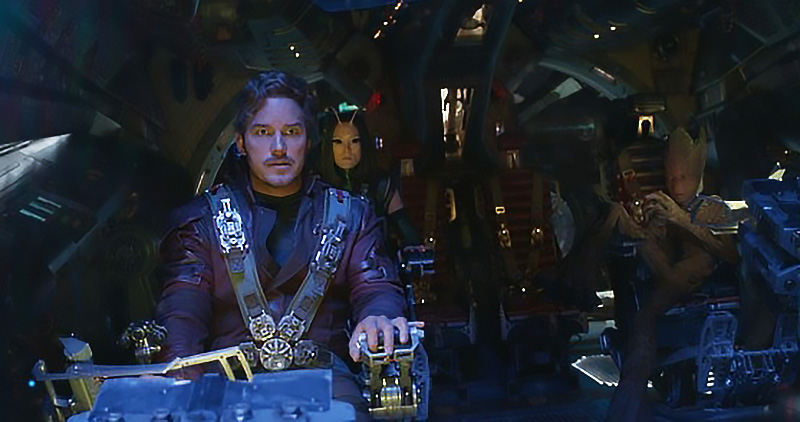 We travel to Nowhere, which is somewhere pretty grim; to Scotland (portrayed in neo-noir hyper realism) to collect Vision (Paul Bettany) and Wanda/Scarlett Witch (Elizabeth Olsen) who are trying to live a normal life-in-hiding together. Since Vision has a big infinity stone in the middle of his forehead, they are not going to be left alone for long. Perhaps the biggest and longest battle takes place on beautiful Wakanda, last scene in the recent Black Panther and hardly changed until it is invaded by an insurmountable army. Chadwick Boseman resumes his role as the charismatic leader T’Challa/Black Panther and most of the key cast from Black Panther return to contribute nobly to the final battle.

If you congratulated yourself for feeling a part of Thor: Ragnorak and the recent Black Panther don’t expect the same inclusive welcome here. Casual Marvel viewers will find themselves struggling to keep track of who has what powers, and who knows whom while many jokes will fly over your head as they actually refer to riffs from previous films. At times even the characters have to be introduced or brought up to date, as when Stark tells Bruce Banner (Mark Ruffalo) – who has lost the ability to turn into the Hulk just when it is most needed – that the Avengers broke up. ‘You mean like the Beatles?’ he asks. Stark also admits that he is not speaking to Steve Rogers anymore although there is no room for personal wars with such an awesome endgame being played out. 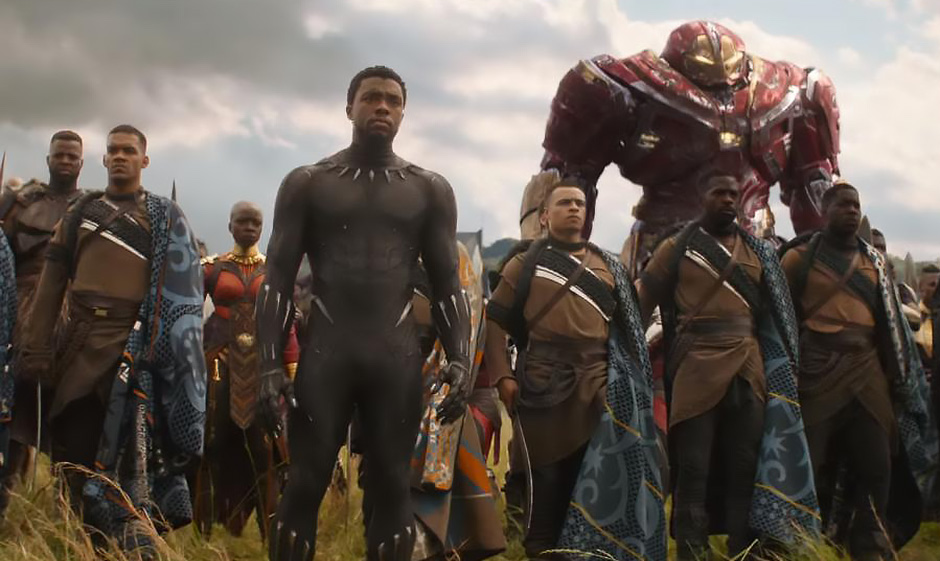 is a cleverly written reward for fans with an encyclopaedic knowledge of the Marvel universe, but basic plot is like a Hitlerian maniac has taken Thomas Malthus’s 1798 book An Essay on the Principle of Population

to its unintended conclusion. Thanos recognises that the population is creating such strain on the natural world that we are running out of finite resources and that man lacks the self control to guarantee a good quality of life. His solution – selective genocide – is, of course, drastic, but to discredit by association what are, in effect, the concerns of many scientists and charities, is to put fuel in the hands of men like Trump who deny climate change or any of Thanos’ legitimate concerns.