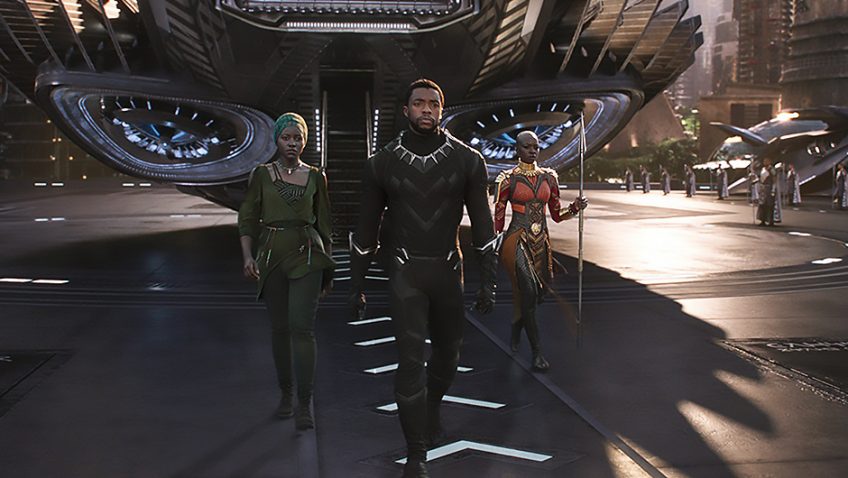 A cultural revolution in a marvel comic brought to the screen

When Disney bought Marvel Entertainment in 2009 for $4 billion it was seen by Wall Street as bargain investment and by comic fans with a slight apprehension. As the latest Marvel blockbuster hits the screens, it can only be seen as a welcome cultural revolution. Black Panther is the first black mega-budget blockbuster. It is not only about a black super-hero and leader of an African country, T’Challa (Chadwick Boseman), but its 31-year-old director and co-writer, Ryan Coogler (the impressive Creed and Fruitvale Station) is black as are all but two of the many speaking roles. The costumes and even the characters’ names are ethnic, without a William or Henry in earshot. And the best news is that viewers of all backgrounds, genders and ages will want to see it.

When Boseman was first seen as Black Panther in Captain America: Civil War, his minor character, the King of the African country Wakanda, was grappling with his identity as the heir to the throne (his father is killed in the film), torn between upholding the traditions of his father and country and meeting the needs of its population in the present. The identity theme runs through Black Panther as well, which is, in many ways, as much a coming-of-age movie as a super hero movie.

If, in Captain America: Civil War, T’Challa wore Saville Row suits as do many wealthy African leaders, when he returns to his country, Wakanda, in Black Panther

, he wears traditional robes and handmade traditional jewellery; very little at all; or his Black Panther suit strengthened by the alien metal vibranium. He does, however, retain the rather wonderful accent he adopted in Captain America: Civil War.

In a prologue, we are told the background to the comic story: Ages ago, five African tribes went to war over a meteorite made of a valuable metal called vibranium. A warrior ingested a “heart-shaped herb” that was affected by the metal and he gained superhuman abilities. (Forest Whitaker plays Zuri, the current keeper of the sacred herb and an elder statesman and high priest of Wakanda who is far from a passive old man in the film). This first “Black Panther” united the tribes to form the nation of Wakanda, but it is a tradition that any tribe member can challenge the ruler. The Jabari Tribe refused to follow the Black Panther’s rule, remaining in the remote, cold mountains while Wakandans experimented in secret with vibranium to develop the most highly-advanced technology in the world.

Coogler and co-writer Joe Robert Cole underscore the current relevance of this legendary background by dramatising how Wakanda has developed technologically by posing as an isolated Third World Country. The importance of the ruler holding onto his country’s mineral wealth might remind viewers of the British-educated Sir Seretse Khama, who returned to what is now Botswana when his father died, and fought to keep his country’s mineral wealth hidden from the UK. Just as Khama has trouble stemming from his uncle, so, in a plot development here, T’Challa discovers the painful truth about his own uncle, N’Jobu.

As shown in the film A United Kingdom, Khama married a white woman – and there the parallels stop. There are no white women in Black Panther

and the women there are treated as equals. They are Special Forces warriors, headed by Okoye (Danai Gurira) or technological wizards to rival ‘Q’ in the Bond films like Shuri, (Letitia Wright). Shuri is T’Challa’s feisty sister, a teen prodigy and the film’s fashion trendsetter). Or they might be War Dogs, spies from Wakanda who are scattered around the world to accomplish missions. Refreshingly, the female action heroines here do not wear skimpy, revealing costumes, but uniforms that look like they might protect the wearer rather than expose their cleavage.

When T’Challa returns to his country his feelings for his old flame, the pretty War Dog Nakia (Lupita Nyong’o) are rekindled. Coogler uses Nakia to bring in a topical issue of interest to black people, countries and their governments. When T’Challa and Nakia are first reunited, Nakia is fighting to free girls enslaved by Boko Haram in Nigeria – not something you expect to find Scarlett Johansson doing. Nyong’o can be heard speaking a few words of Hausa and using a variety of martial arts moves. She needs all the fighting skills imaginable when the country believes T’Challa has been killed by usurper N’Jadaka (AKA Erik Killmonger) in a leadership challenge. Nakia breaks with tradition and, in a humorous sequence, travels to the mountains to convince the Jabari Tribe to lend T’Challa supporters his fighters.

Michael B. Jordan and Daniel Kaluuya in Black Panther

If Nakia has different ideas about what the country’s priorities and role in the modern world should be, so does N’Jadaka, played by Michael B. Jordan in scene-stealing fashion. Like Coogler himself, N’Jadaka comes from Oakland, California and brings the African American point of view to the film. N’Jadaka’s claim to the throne is that he is the son of N’Jobu, who inherited one of the royal rings, which N’Jadaka now wears. N’Jobu was stationed in Oakland as a War Dog, but he went native and married an American.

N’Jadaka became a black ops soldier and uses his training and his claim to the throne to overthrow his cousin in a challenge fight. He believes that it is time to exploit the wealth and military power of vibranian to help ‘brothers’ the world over. 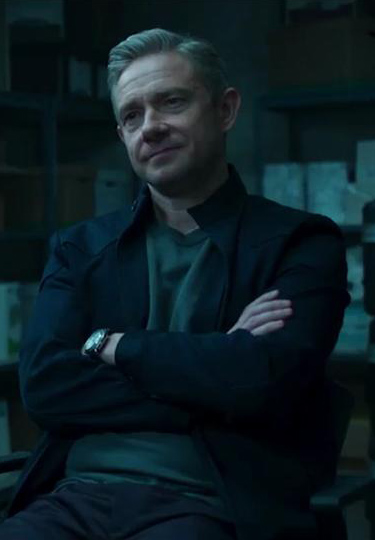 It is not only because Jordan is as physically imposing and charismatic as Boseman that their confrontation is so exciting. Both men have valid points of views that are too rigidly upheld. If this is a coming-of-age movie, T’Challa has to broaden his outlook. Touchingly, he realizes that N’Jadaka is less evil than angry and inflexible.

It might be odd if the only villain in the movie were black, and we might miss out on one of the best villains in years. Arch-villain Ulysses Klaue (Andy Serkis with no prosthetics and a great accent) is a South African black market arms dealer with a sonic disruptor cannon for an arm who, at the beginning is allied with Killmonger/N’Jadaka to get hold of the vibranium. T’Challa has been criticised for failing to kill Klaue and his leadership position is weakened by N’Jadaka’s cunning alliance.

There is a white hero, too, CIA agent and former pilot Everett K. Ross (Martin Freeman). He is used for comic relief, to represent the reaction of the developed world to the wonders of Wakanda’s technology and a bridge between two worlds when he is taken there on what turns out to be a white man’s journey of enlightenment.