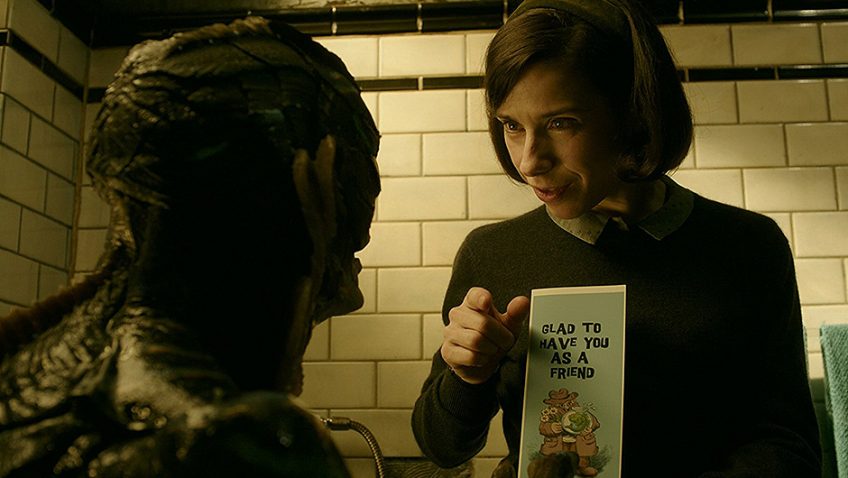 Guillermo del Toro shows us the shape of romance

The Shape of Water

is the movie that Guillermo del Toro and his aquatic empath Doug Jones have wanted to make since 2008’s Hellboy II when athletic amphibious creatures had brains, integrity – and a love interest. Considering del Toro’s years of working as a special-effects makeup designer, it was only natural that the 53-year-old’s creatures from his horror, sci-fi and comic book fantasies would find their way into an adult romance with a socio-political agenda.

The Shape of Water

is an insistently atmospheric period film, but instead of going back to Franco’s Spain as in Pan’s Labyrinth, we are in Cold War Baltimore, 1962. The evil despot is the misogynistic, sadistic Army Colonel Richard Strickland (Michael Shannon) and the resistance heroes are the misfits and outcasts of society.

First and foremost is Elisa Esposito (Sally Hawkins in a performance to rival her eponymous Maudie overlooked this awards season). A fish out of water in Baltimore, Elisa is an orphan who was found in a river bed like a female baby Moses – pulled out of the Rio Grande as opposed to the Nile perhaps – with the scars of claw-like scratches on her neck. This might explain why she can hear, but is mute, communicating with those who are willing to learn sign language.

Elisa’s next-door neighbour is one such person and another outcast. Giles (Richard Jenkins) is a sixty-something, gay commercial artist who has been let go from his company either because of his age or sexual preferences or both. He is encouraged to bring his superb Norman Rockwell-type posters to his cagey former supervisor for freelance work, but nothing he does is ever good enough. Giles is also the film’s narrator whose account of this fairy tale opens and closes the film like bookends.

Another sign language interpreter is Elisa’s only friend, Zelda Delilah Fuller (Octavia Spencer). Zelda is another outcast because of her ethnicity, financial status and gender. The two women share the same cleaning shift at a top secret government laboratory where lonely Elisa, who is around 40, finally meets her soul-mate.

Her soul-mate is not the type who clocks in to work but the type who is dragged in – in chains. The slimy amphibian man, known as ‘the asset,’ is played by Doug Jones, now 57, but you’d never know it. He turns out to be the most marginalised misfit of them all. He was captured in South America by the peripatetic Colonel Strickland who cannot settle down with his family until the asset is vivisected. It is believed that his unique dual breathing system could be advantageous to the Space Race. He sneers and mocks the legend that in South America, he is revered as a god. 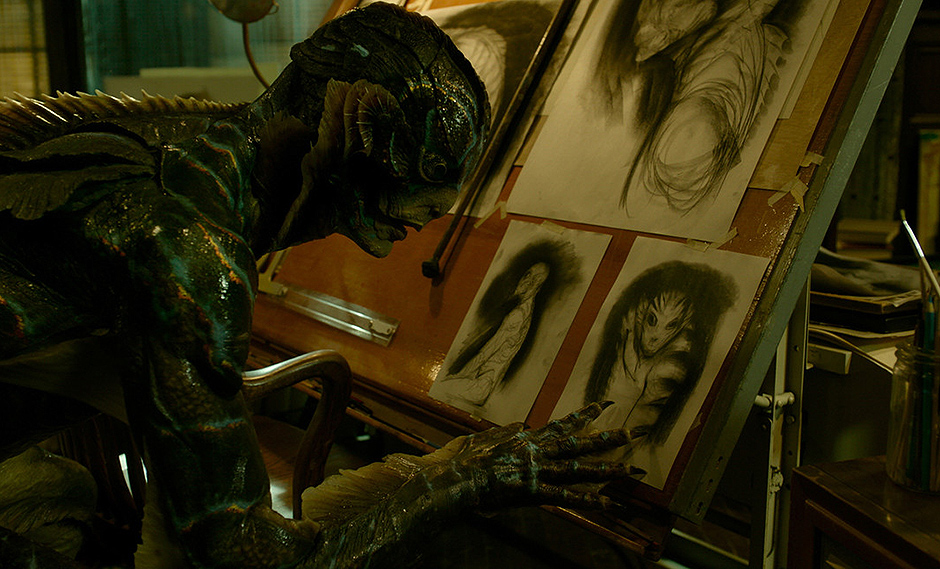 Doug Jones in The Shape of Water

The Russians are interested in the asset too, and have a spy inside, Dr Hoffstetler (Michael Stuhlbarg ). He, like all the good guys in the film, is a bit of a misfit too, as he attempts to defy his handlers to save the creature’s life. Their attitude, which is a bit hard to believe, is that if the asset is killed, he cannot help either country in the Space Race, so it’s not worth the risk of smuggling him out.

Hoffstetler’s resolve is strengthened when he notices the cleaner Elisa – of all people – communicating with the creature during her break. In secret, Elisa has been sharing her hard-boiled eggs; playing him music on a record player that she somehow gets by security and teaching him sign language. 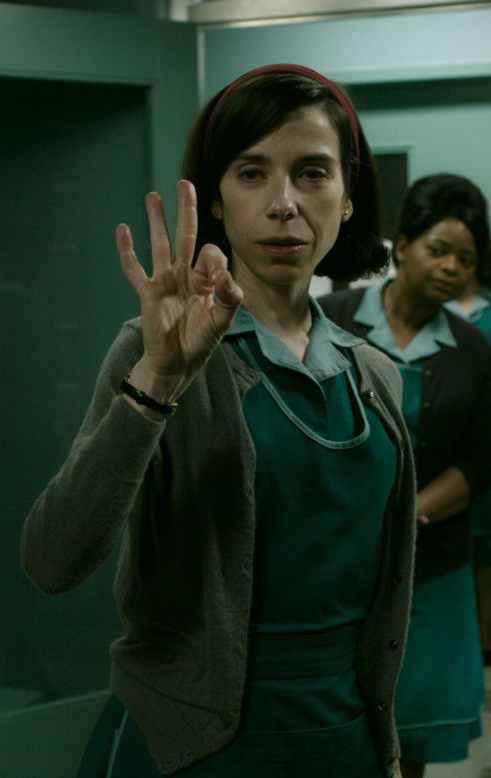 Sally Hawkins in The Shape of Water

There is something compelling her toward the creature, even when most people would be frightened to death by the tall, upright scaly sea monster with razor sharp claws whose greenish skin seems to set the colour palette for the entire film. The Asset is so compelling in fact, that Elisa concocts a plan, worthy of the Spanish resistance, to save him.

The Russian spy subplot, though a fun idea, is written like a puerile cartoon (but at least, unlike TV’s McMafia, Stuhlbarg speaks Russian) and the film, as you may have noticed, is not subtle. The middle-aged white men in power are ignorant racist, sexist homophobes and everyone else (with the possible exception of Zelda’s good-for-nothing husband) is automatically an animal lovers and good guy. There is also a hilarious scene involving one of Giles’ cats – because gay men have cats.

And you might find that del Toro overdoes the whimsicality. Elisa and Giles live in rather wonderful studio lofts above an old fashioned cinema and watch old movies and musicals together. Elisa can be seen tap dancing down the corridor, in one scene and in another, the neighbours go to a diner where Giles, ogles the young waiter and regularly orders two slices of inedible green (of course) pie.

Yet it’s difficult not to fall under the spell of the romance as Elisa finds what she never knew she was looking for. In addition to the eye catching production design, there are some powerful metaphors, not the least of which is the innocent river god, tortured and sentenced to death like a pagan Christ. A better one, given this particular god’s sexual prowess – the film has humour – is Strickland as Ahab chasing his nemesis, Moby Dick. Instead of a missing a leg, Strickland loses another body part in his battle for supremacy over nature.

And who will not melt at Giles’ off camera delivery of what is apparently an excerpt from an Islamic poem? “Unable to perceive the shape of You/ I find You all around me/ Your presence fills my eyes with your love/ It humbles my heart/For You are everywhere.”