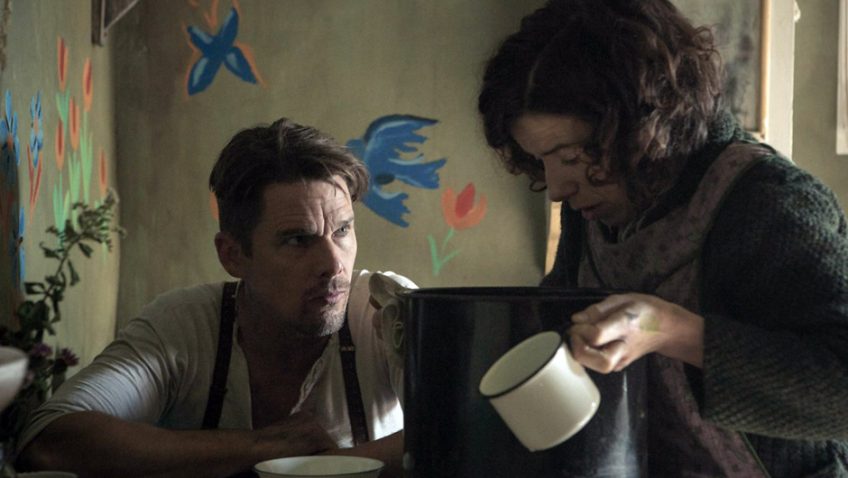 The draw of most artists’ biopics is the fame – and notoriety – of the artist, particularly when, as in the upcoming Giacometti biopic, Final Portrait, the artist is posthumously enjoying a retrospective at the Tate Modern. The draw, and the beauty, of Maudie

is one of discovery. Most of us will enter the cinema ignorant of this Canadian folk artist, but will leave deeply moved, enchanted and grateful for the introduction.

Scriptwriter Sherry White and director Aisling Walsh (Song of a Raggy Boy, TV’s A Poet in New York) choose to open their film in 1937 when 33-year-old Maud’s mother has just died. Cheated of their deceased parents’ inheritance by her brother, Charles (Zachary Bennett) Maud is forced to live on the charity of their conservative, old maid Aunt Ida (Gabrielle Rose) in small town Digby, Nova Scotia. When we see Maud in her bedroom we immediately understand why her options are so limited.

Inflicted with rheumatoid arthritis, Maud’s physical disability allows the ignorant and small minded population – who include her brother and aunt – to treat her as though she were mentally challenged as well. Denied friends, education, or any kind of entertainment, Maud’s only solace, dabbling with water colours, is a painful and difficult process with arthritic joints. Eager to be relieved of her aunt’s oppressive company by her brother’s visit, Maud’s hopes of escape are quickly dashed. This early scene is reminiscent of an excruciating scene in the film Camille Claudel 1915, in which the eponymous sculptress’s long awaited visit from her famous, pompous, self-absorbed and sexist brother, Paul, also ends in disappointment.

Maud is allowed to hobble to the village store. Frail and thin, she walks with an obvious limp, a twisted body and involuntary twitches of her torso which result in her head tucking into her chest from whence her eyes look up at her interlocutor. What interests Maud that fateful day is not the items on sale, but a notice posted to the wall by a gruff, stocky man who reeks of fish and grunts rather than talks. This is Everett Lewis (Ethan Hawke) a 40-ish fish peddler who lives in a tiny shack on Highway 1 in Marshalltown and wants a housekeeper.

When Maud shows up, having made most of the 7 kilometre journey on foot, Everett is scornful of his only job applicant. Thick skinned, and not put off by the cramped, filthy and primitive living space downstairs, or the double bed in the loft, Maud talks her way into the low-paying job. Like Rod Stewart’s Maggie May, Maud is desperate to leave home and Everett’s dismal offer is her only hope of independence.

Thus begins the story of Maud’s psychological offensive as she delicately tiptoes around her brutish employer, gradually moulding him into a human being fit for co-habitation. She also has a better head for business than he does, and persuades him to get proof of what people owe him by writing things down.

Despite their sir names, Hawke and Hawkins are not an obvious pairing in what turns into a romantic tale of two mismatched pragmatists who settle for less and end up with much more. The chemistry, however, is wonderful and you can easily forget you are watching the co-star of Before Sunset and Boyhood, or the star of Happy-go-Lucky or the Oscar nominated co-star of Blue Jasmine. 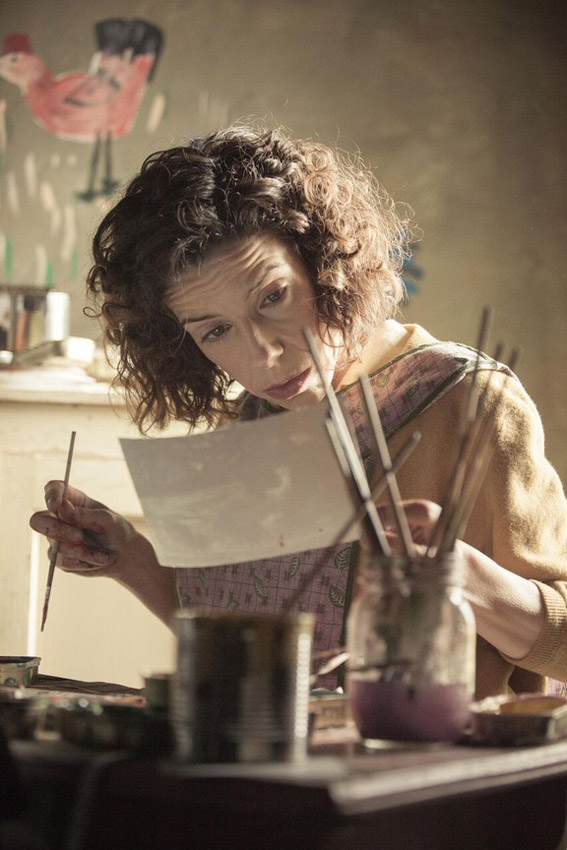 At first Everett threatens to sack Maud when he notices her penchant for painting the shack is far greater than her ability to clean it. Then, we a New York Tourist (Kari Matchett) shows an interest in Maud’s art, the balance in the relationship starts to change. Aisling does not hammer home points with expository dialogue, but allows us to enjoy the irony when we Everett peeling the potatoes while Maud is painting.

Though Maud was a self-taught artist (she never learned how to mix colours), she had been encouraged by her mother to make Christmas cards which they sold door-to-door. While the filmmakers do not reveal this, in a moment of intimacy, we see Maud tell a surprised Everett, that she had a child who died at birth. In a poignant scene with a penitent Aunt Ida (who is shamed by a television broadcast about Maud’s art), we learn the truth about this illegitimate child.

As though pre-empting a media backlash, Sally Hawkins has gone on record defending her decision to play a disabled woman when there are disabled actresses out there. It is a futile and awkward gesture since she took the job. And we know that the economics of making a movie about a little known, disabled painter are such that producers will almost always need a ‘name’ if the film is to materialise.

Hawkins is less interested in trying to contort her body (although she is convincing) than in capturing Maud’s personality and expressing the deformity from within. Her Maud is cheeky, quick witted and stubborn, and so engaging and unpredictable that you never want the film to end. We watch Maud grow with confidence as a woman and an artist, only to realise that Maud always possessed an indefatigable inner confidence that was only waiting to express itself. Hawkins and Aisling give the story its strong emotional impact without the sentimentality that would have ruined it.

Cinematographer Guy Godfree’s vistas of Newfoundland (passing nicely for Nova Scotia which could not supply the tax breaks) support the performances with a sense of place and atmosphere. We feel the cold and the distances; the claustrophobia of the shack and the natural beauty that inspired Maud’s art. The shack is now in The Art Gallery of Nova Scotia in Halifax, but set designer John Hand has recreated it faithfully. Unfortunately, it does not look like Maud’s art was used in the film, and the recreations do not do justice to the real thing (shown at the end titles). Maud Lewis was no Henri Rousseau, but her joyful art defied and transformed her hard life.