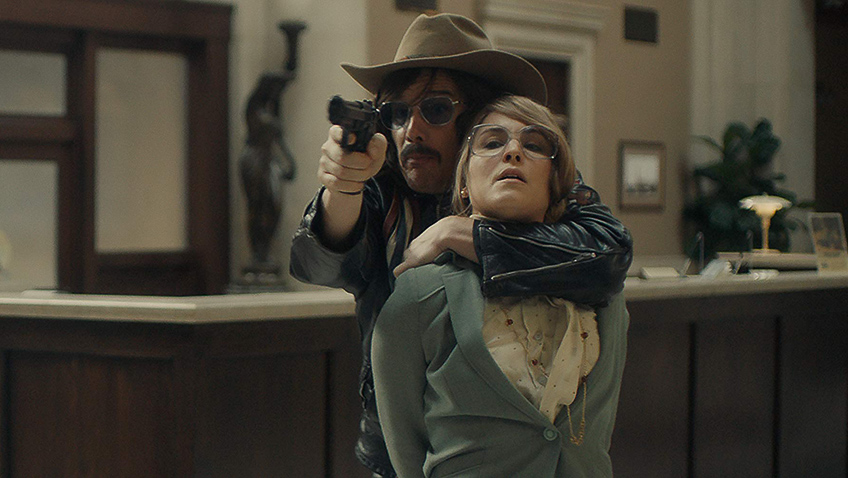 This underwhelming adaptation of the Stockholm Syndrome story is a crime

, based on Daniel Lang’s 1974 New Yorker article, The Bank Drama. The article describes in detail the heist/hostage crisis in Stockholm’s Svirges Kreditbank over the last week of August 1973 that is the basis of the term ‘Stockholm Syndrome.’ There is a thought-provoking drama inherent in the relationship between a male hostage, three sheltered, middle-class female hostages and the two hard-core convicts that capitalises on the fascinating post-ordeal interviews. Instead we get a fairly conventional hostage drama that at times resembles Dog Day Afternoon with what could just as persuasively be seen as a love story than evidence of the syndrome.

Wearing a elaborate disguise, speaking English with a decent American accent, and blasting Bob Dylan’s ‘Beautiful Morning’ from his radio, Lars Nystrom (Hawke), who had been convicted the previous year for grand larceny, enters the imposing Svirges Kreditbank with a submachine gun under his coat. After jumping on the counters and shouting a lot, he lets everyone go except for two terrified female hostages.

Hostage Bianca (Noomi Rapace) has a husband and two baby daughters, but we never get to know Klara (Bea Santos), Bianca’s co-worker. Later, as in the original true story, a male bank employee, Elov (Mark Rendall) is found hiding although, he is a shadow of the gallant and stoic real life hostage. All of the names are changed. With the hostages, this would have to be the case as Budreau has cut the number in half and the remaining two are composite characters.

Police superintendent Mattsson (Christopher Heyerdahl) arrives to negotiate but in fact, the police, under higher orders, have no intention of letting the convicts leave the bank alive. Amongst Lars’ demands are $1 million, food, a getaway car and the release of his prison friend Gunnar (Mark Strong), who may or may not be cooperating with the police to secure a shorter sentence. Lars also has to call the police back to request sanitary products for one of the female hostages. 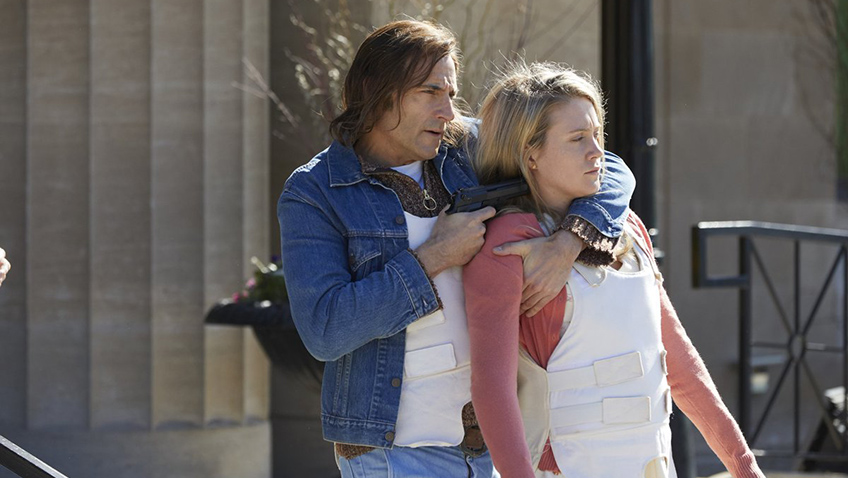 Mark Strong and Bea Santos in The Captor

As the group camps out in the sound-proof and semi-secluded vault area, police, snipers and press surround the building. At one point the police bring in Bianca’s blond, handsome husband, (Thorbjørn Harr) and, through her tears, she gives him instructions on preparing the fish she had bought for dinner. It is a lovely touch of convincing detail that makes the film come alive (although the instructions were given to the couple’s housekeeper over the phone).

At one point, to put pressure on the police to deliver the demands, Bianca agrees to feign escape so that Lars can pretend to shoot and kill her. As promised, she is only glazed, but the police, until they resort to tear gas and they see her move, believe she is dead. Ironically, this creates a bond of trust between the two. 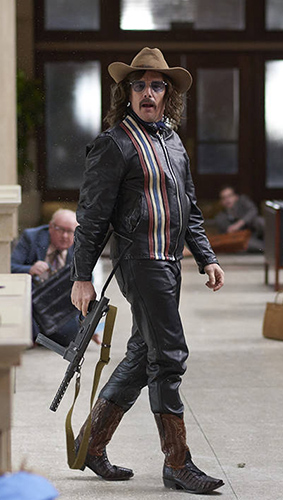 Ethan Hawke in The Captor

After the ordeal, the real-life Bianca stops off to visit Gunnar (real name, Clark) in prison, and not Lars (real name Jan). In the film it is Lars who is given all the tender moments and Gunnar only really scores when he notices that Lars had forgotten to turn off the CCTV cameras (which is true). Mark Strong is a great actor, but the real Clark was described as being very handsome and seems and close to the female hostages. Gunnar is an underwritten character and Strong’s portrayal of an aloof man presents a problem in understanding or caring about the character.

Hawke is perfectly cast as Lars, who was apparently a mixture of ‘brutality and tenderness’ according to hostage named Elisabeth who was written out of the script or composited. Budreau gives us little of the conversations about prison life that in real life opened the hostages’ eyes to a world they never thought of. Unfortunately, and despite Hawke’s talent, Lars’ never becomes the memorable character that Al Pacino created in Dog Day Afternoon. The (true) incident in the film in which Lars splits his only pear impresses the starving hostages, and one hostage reports how Lars draped his favourite gray wood coat around her shoulders when she was shivering adding, ‘I was sure he had been that way all his life.’

We pick up on certain signs that Bianca’s husband is neither a manly husband (Lars worked out in prison and was in top physical shape) nor a house-husband (we hear him tell Bianca that he served something else, suggesting that cooking fish was too much for him to handle) while we register Lars’ sensitivity and protectiveness. It is the police’s rash reactions that the hostages fear. The elements are there to build a credible love story quite apart from Stockholm syndrome and Budreau does so.

The aftermath of the ordeal, in which the hostages are placed under psychiatric care in a hospital, suggests something more complex was taking place and Budreau omits this fascinating and potentially dramatic testimony altogether from the film. He also omits Klara’s (Kristen in real life) 30-minute phone conversation with Sweden’s Prime Minister, Olof Palme, a phone call that could rival Al Pacino’s conversation in Dog Day Afternoon. At one point she says, ‘But dearest Olof, sweetheart, it may sound stupid, but I want to go with the two [convicts].’ The Prime Minister asks, ‘Why?’ Kristen replies, ‘Because I trust them. I know they would let us go as long as the police don’t chase them.’ And while this pitiful truth is lost on the Prime Minister, we know that, too.