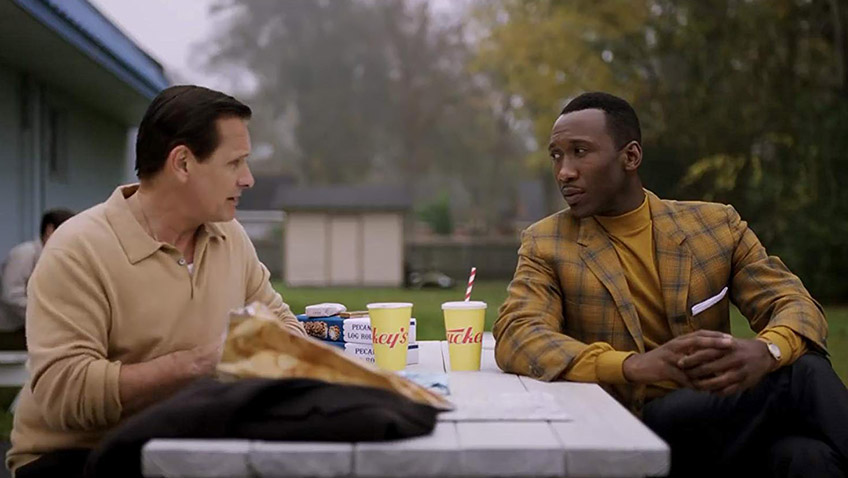 An enjoyable, if familiar, road movie with two great actors

, which has just received five Academy Award nominations, including Best Picture, are that it is co-written and directed by Peter Farrelly, co-writer/director gross comedies Dumb and Dumber and There’s Something About Mary and that it is not a high concept reverse Driving Miss Daisy, which it superficially resembles. Green Book

is based on the true story of a summer job that unites the oddest couple to reach our screens. While Green Book

, features two noteworthy performances and is certainly entertaining, it seems curiously contrived, predictable and cunningly packaged as a feel-good fable for our times.

While the script is both humorous and touching, everything depends on the film’s two great actors who do it justice: Viggo Mortensen (Captain Fantastic, The Two Faces of January, A History of Violence) as racist Bronx bouncer Tony Vallelonga, and Mahershala Ali (Oscar winner for last year’s Moonlight) as the cultivated, multi-lingual African American classical/jazz fusion pianist Dr Don Shirley.

If the plot is Driving Miss Daisy in reverse, there is a darker underbelly that takes us on a road trip through the segregated Deep South in the 1960s. It mirrors the experience of the black ballerina Raven Wilkinson who was so exhausted from dealing with discrimination on tour that she left the Ballets Russe de Monte Carlo.

And however familiar the story feels, truth is stranger than fiction. In 1962, night club bouncer Frank ‘Tony Lip’ Vallelonga, so called because he had the gift of the gab, finds himself jobless when the Copacabana is closed for refurbishment. He returns home to find two African American workmen in the house and notices that his wife, Dolores (Linda Cardellini) has served them cold drinks. We see Tony take the unwashed glasses as though they were infected and throw them in the bin.

When it is clear that winning a hot dog eating competition isn’t going to pay the bills, Tony attends an interview to be a chauffeur to Dr Don Shirley. Expecting a white medical doctor, Tony is bemused to find himself in the ornate penthouse apartment above Carnegie Hall, greeted by a black man dressed in African robes and seated in what looks like a throne. Dr Shirley explains that he is a musician and needs not only a chauffeur but a body guard for a summer tour of the South. Don’s business manager makes it clear that Tony will not get all the money unless Don makes all his contracted dates. 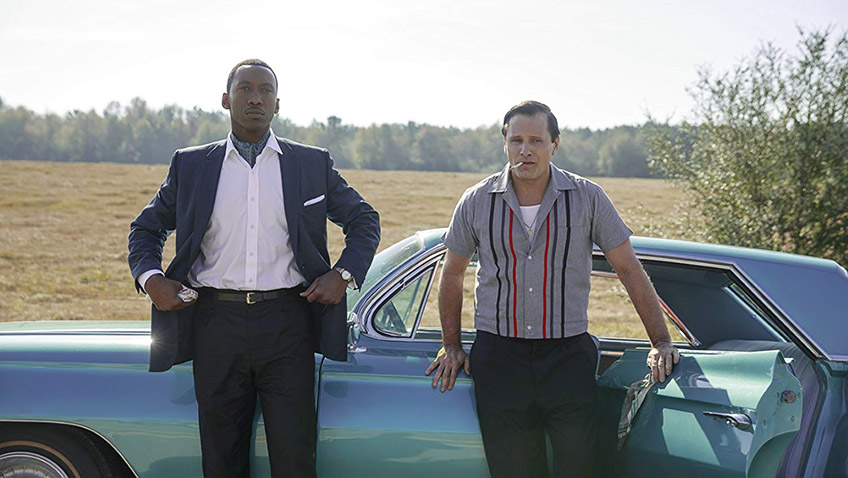 Thus begins a road movie in which, as you begin to suspect, both men have to compromise and learn from one another to keep their end of the bargain. The first thing that Tony has to learn about is the Green Book, originally compiled by NYC postman Victor Hugo Green from 1936-1966. The Jim Crow laws made long distance travel difficult for black motorists and The Negro Motorist Green Book

provided a list of alternative accommodation, restaurants and filling stations where blacks would be welcome.

Tony’s eyes are open to the extent of the discrimination and you can tell he is shaken – and awakened, particularly after getting to know Don and hearing him play. ‘He don’t play like a coloured guy’, Tony tells his wife. ‘He plays like Liberace but better. He’s a genius.’

Unlike Tony, Don is also highly educated and multi-lingual, having played the piano from the age of 3, and having been trained in the Soviet Union where he excelled in classical music. But there was no market for a black pianist playing classical music, so Don invented a blend of jazz and classical that was popular with white audiences. 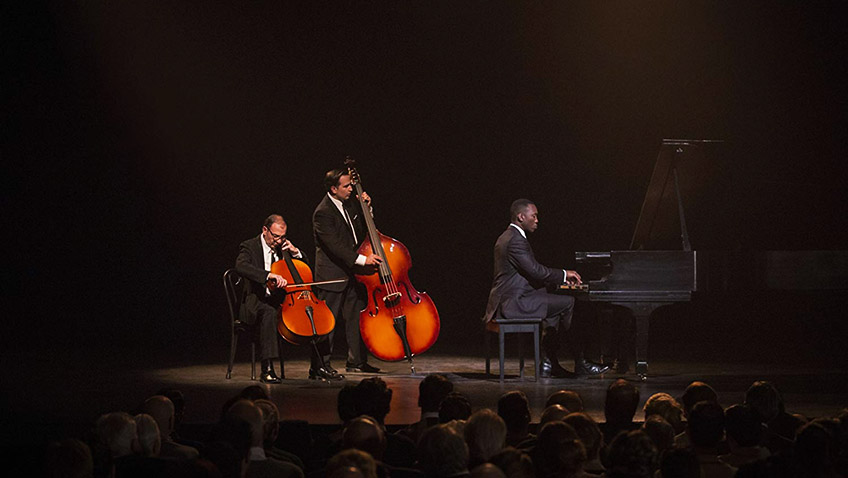 Tony cannot, however, get over the extent to which Don has forsaken his roots for the sake of his career, and throughout the film jokes are based on his attempts to introduce Dr Shirley to poplar black music and fried chicken. In return, after noticing Tony’s boring and clumsy efforts to write to Dolores, Don plays Cyrano de Bergerac, dictating romantic and descriptive letters that Dolores reads out loud to her impressed friends, but (and this is true) suspects are not the words of her husband.

While some aspects of this friendship are a lot of fun, others seem schematic with little dramatic flair. While Tony warns Don not to venture out of his motel, Don is caught with another man in the YMCA and arrested. Tony has to cajole and bribe the cops (something that he is used to from the looks of it) to let him go. And when the two are pulled over by a racist traffic cop and thrown in prison, Don makes a phone call to his old friend Bobby Kennedy – and presto, they are released. 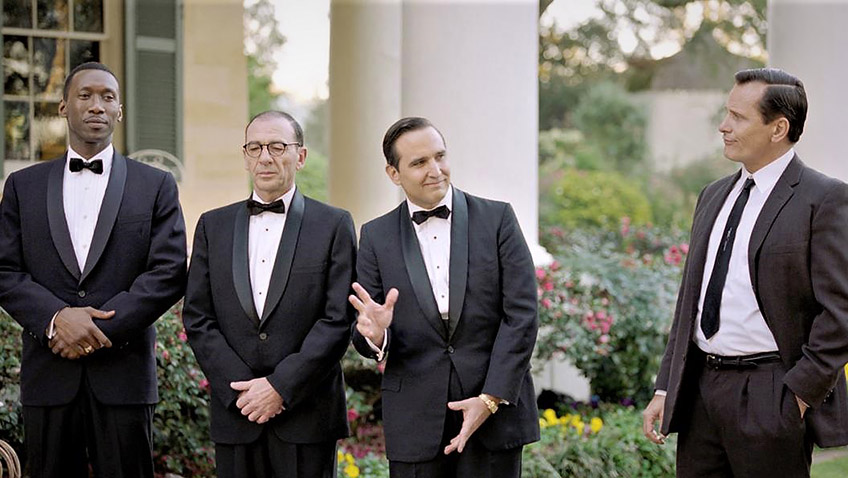 In this manner, once Tony and Don begin to enjoy one another’s company, there is little tension to the film. Raven Wilkinson’s journey was much darker and more dramatic: one of her performances was interrupted by the Klu Klux Klan, who entered the theatre demanding, ‘where is the Nigger?’

As the refined, closet homosexual and frustrated musician. Ali is terrific and sufficiently in contrast to his role in Moonlight to impress. Mortensen is not really playing against type, except that his is a rare comic performance, as he has played gangsters and strong, violent characters. In real life however, it is Mortensen who is the linguist, the musician and the writer.

A controversy has arisen over the portrayal of Dr Shirley. Surviving members of his family are angry that they were not consulted and object to the contention that the two men were lifelong friends. The complaints have to be discounted in part because all biopics use creative licence, and the film’s co-writer, Nick Vallelonga, met Dr Shirley and grew up with his father’s stories of this summer.

But it is curious that Nick Vallelonga waited until both men had died to propose this story, and that such a fabulous premise was not taken by Francis Ford Coppola who noticed Tony years ago at the Copacabana and gave him a bit part in The Godfather or by Martin Scorsese who cast Tony in Goodfellas. This might lend credence to Dr Shirley’s relatives’ argument that Dr Shirley did not want to be the subject of a film, even if Tony (who appeared in The Sopranos) has no objections.