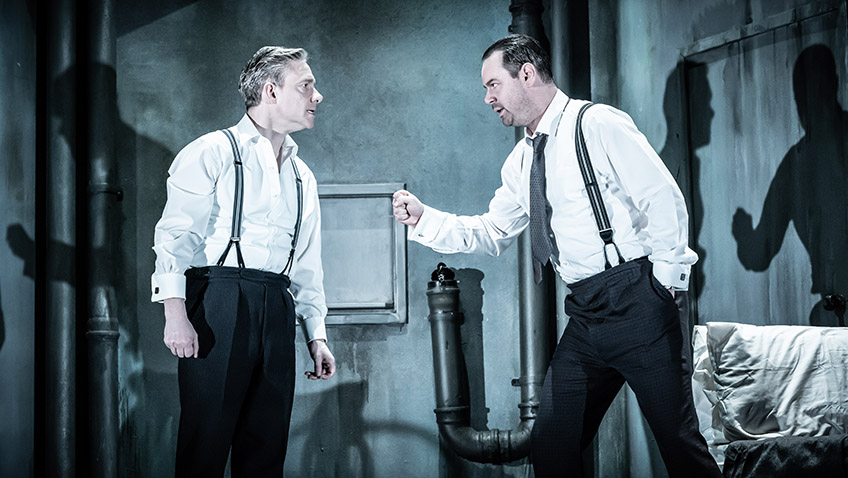 Pinter Seven at the Pinter: A Slight Ache & The Dumb Waiter

The Jamie Lloyd Company has presented a season of twenty one-act plays by Harold Pinter in seven separate programmers over the last six months. Well-known actors have rallied round. It has been a remarkable celebration. For me the high spots have been Party Time and Celebration, not least because of the original way they were staged by Jamie Lloyd. The season ends with one of Pinter’s best-known and one of his least-known plays; both are two-handers.

Pinter’s short 60-minute black, sinister farce, written in 1957, was performed in Germany before Its British premiere at Hampstead Theatre in 1960 and its transfer to the Royal Court. I last saw it in 2007. Lee Evans was hilarious.

Gus and Ben, two smartly dressed professional killers, are in the ugly basement of a defunct restaurant in Birmingham, awaiting orders. Danny Dyer, who created the role of the waiter in Celebration and was brilliantly funny, plays Gus, the more edgy of the two. Martin Freeman is Ben. They make a good pair; good for the box-office.

Lloyd’s production goes for the comedy rather than the politics and menace. When the play was performed in Germany it was evidently acted entirely for horror and there wasn’t a laugh in it.

The most menacing character is the dumb waiter itself. The rumbling noise it makes as it hurtles down the lift shaft is unnerving. The sound of its arrival is as sharp as a guillotine. Who is operating the dumb waiter? Who’s the joker sending down ridiculous orders for food he knows Gus and Ben cannot provide? 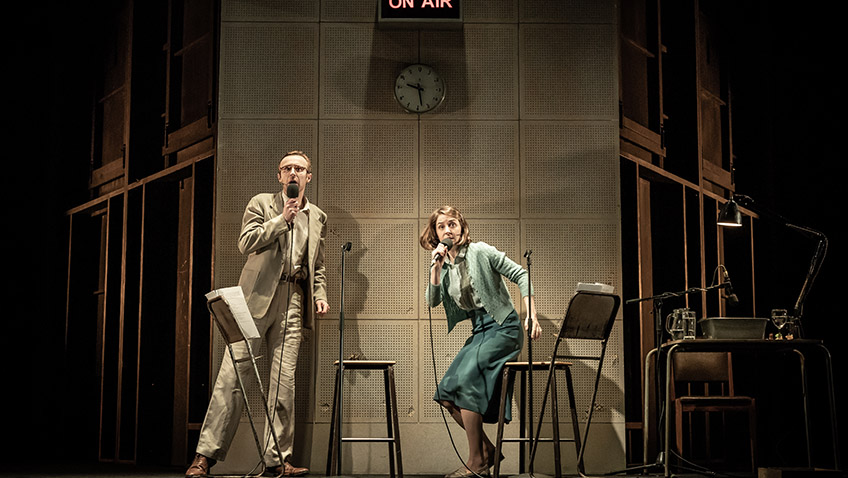 A Slight Ache, premiered in 1959, was Pinter’s first radio play and it begins with the killing of a wasp by drowning it in a jar of marmalade.

On the longest day in the year, a middle-class couple living in a country house wonder why a match seller is standing at their backdoor from dawn to dusk. They decide to invite him inside. He remains mute throughout, a silent presence.

The match-seller on radio exists only in the couples’ and audience’s minds; but on stage and television he is there for all to see. Jamie Lloyd’s innovation is to set the action in a radio studio with the actors speaking into microphones and not to bring the match seller on to the stage at all. The actors talk to an empty space.

Husband and wife have two totally different reactions. The husband (John Heffernan), who writes philosophical essays, is alarmed and disgusted by the smelly old man. He tries to ward off his fear by talking. Heffernan delivers a long monologue with considerable skill.

Who is the match-seller? And what does he want? Is he laughing or is he crying? Should the couple call the police or an exorcist? Is he really there? He could be their conscience, their lost youth or a metaphor for dying and death.

The Pinter season isn’t quite over. Tom Hiddleston, Charlie Cox and Zawe Ashton will be seen in Harold Pinter’s Betrayal in March.