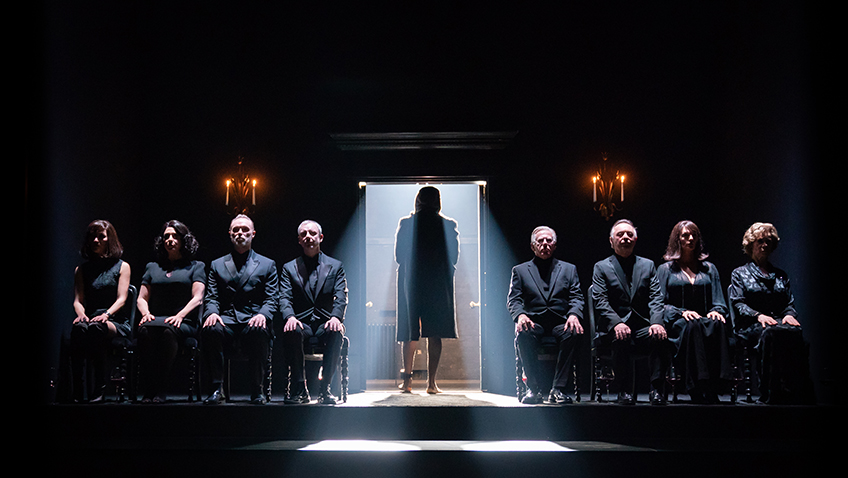 This forty-minute political play, a companion piece for Mountain Language, premiered in 1991 and is set in a brutal totalitarian state. A cocktail party is in progress at a health club. The chattering classes are chattering.

Party Time, said Pinter, is about shits and a victim. A government chief is entertaining a number of colleagues, their wives, and the wives of former colleagues. Outside in the streets people are being rounded-up. A woman wonders what has happened to her brother and is told to shut up by her husband.

The play is a series of conversation pieces, brilliantly orchestrated small talk, with plenty of sexual innuendo, repartee, and sheer verbal unpleasantness. The dialogue, in its clipped repetitions, is in the characteristic Pinter manner, witty and violent.

Jamie Lloyd directs a fine ensemble. The actors sit on chairs in a straight line on a rostrum facing the audience directly. They step down on to the front stage when they have a scene.

The climax, a monologue, in which a dissident describes the darkness he “sucks” in prison, doesn’t make the impact it should, either in the writing or the performance. 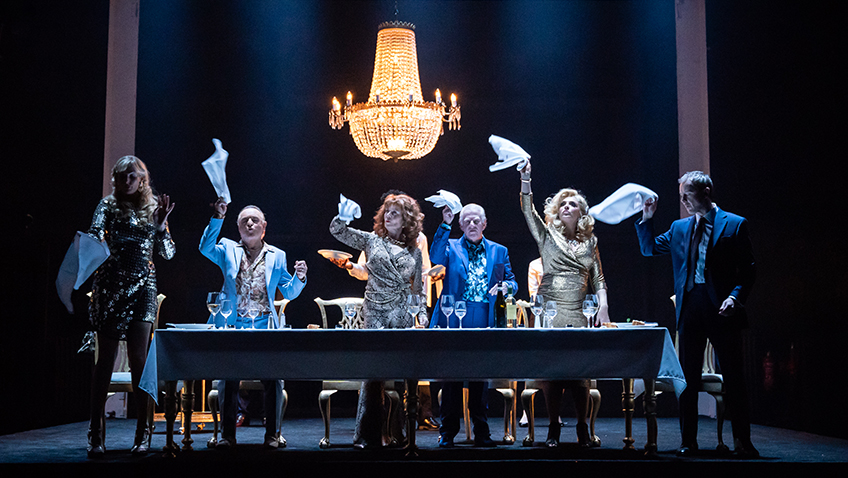 The Company in Pinter Six

The play premiered at the Almeida in 2000 and one of the things it tells us, and it will be a comforting percu for many, is that “you don’t have to be English to enjoy sex. Lots of people enjoy sex without being English.”

Two middle-aged brothers (Ron Cook and Phil Davis) and their middle-aged wives (Tracy-Ann Oberman), who are sisters, are celebrating a wedding anniversary. The aggression is naked. The men describe themselves as strategy consultants. They are in fact gangland thugs having a piss-up dinner with their floozies.

Katherine Kingsley is very amusing as a whore who remembers the good times she had as a young secretary behind the filing cabinets when she was a silly, dizzy, naughty flirt. She is married to a sociopath (John Simm).

The raucous vulgarity is regularly and hilariously interrupted by the very civilised maitre d’hotel and his young staff, who are intellectually their superiors. The waiter (Abraham Popoola) fantasises about his granddad, whom he claims knew everybody and names famous authors, famous film stars, famous gangsters and famous politicians he had met. Rarely can name-dropping have been so absurdly funny.