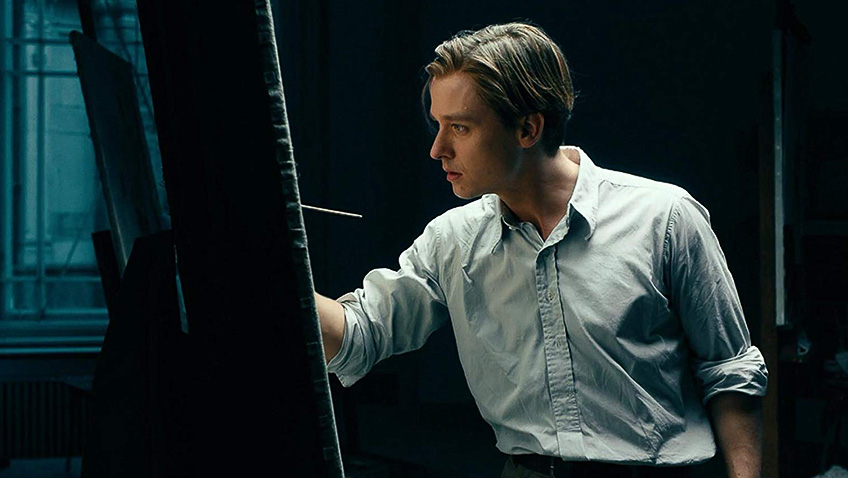 , German writer/director Florian Henckel von Donnersmarck, who won an Academy Award for his first feature, The Lives of Others stated, ‘I believe that great art is deeply biographical’. This seems to be at odds with the German artist Gerhard Richter, whose acclaimed first exhibition, recreated in this complex, emotionally-charged drama, was met with the tag, ‘Werk ohne Autor – work without author – the German title of the film – for its generic, depersonalised ‘blurred photo’ paintings.

Richter, 87, a multi-millionaire who is considered by many in the art world to be the world’s greatest living painter, has disowned the film without having seen it, despite allowing Donnersmarck to tape a month’s worth of personal conversations at Richter’s home. ‘Maybe,’ Donnersmarck muses, ‘the film is for everyone but him’. And despite its flaws: some expository dialogue an over-reliance on a single villain, and an overly-emphatic ending, Never Look Away

might be the best drama about the evolution of an artist ever made.

Richter was 13 when Dresden, where he was born, was destroyed and he grew up, like Sigmar Polke and Anselm Kiefer, in the shadow of WWII, innocent, but bearing the guilt of his nation, yet learning nothing about it in school. As Donnersmarck dramatises so revealingly, while the Nazis persecuted artists who did not paint in a realist style to glorify the Third Reich, the transition to Communism in East Germany after the war saw artists forced into following the propagandist Socialist Realist School if they wanted to graduate and to work.

In 1937, young Kurt Barnert (Cai Cohrs) is taken to a travelling degenerate art exhibition (the major exhibition was in 1933) by his youthful, beautiful Aunt Elizabeth May (Saskia Rosendahl). A Nazi guide insults the paintings, intimating that their warped vision is the result of genetic issues. Pointing to a semi-abstract work by Kandinsky and then to six-year-old Kurt, he sneers, ‘I think you’re artist enough to do this.’ Aunt May whispers to a discouraged Kurt, ‘don’t tell anyone, but I like this.’ 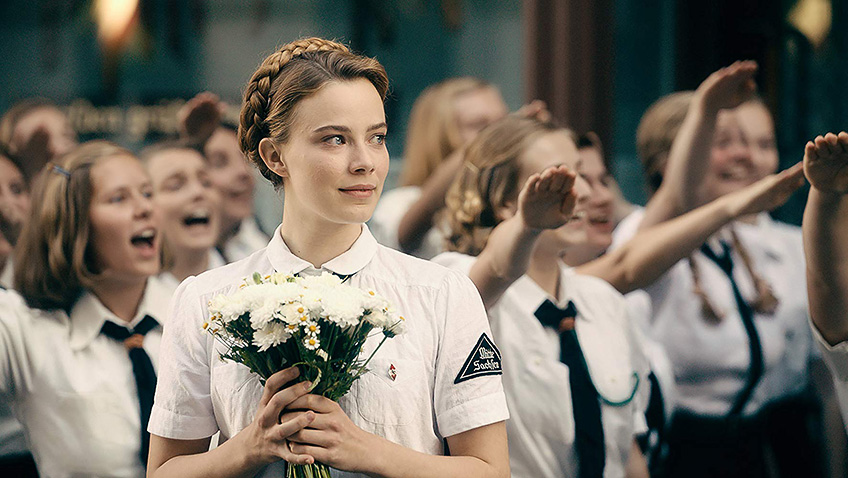 Saskia Rosendahl in Never Look Away

In the next few minutes we realise that the lovely, spontaneous and creative Aunt May has mental health issues. On the way home Aunt May stops in front of a group of bus drivers who honk their horns as she stands in ecstasy listening, while at home, Kurt see her playing his mother’s piano stark naked. ‘Never look away,’ she tells the astonished boy as though she has eyes in the back of her head.

Kurt’s father, a teacher, cannot bear to utter Heil Hitler when he and his wife’s family visit his sister-in-law Elizabeth at a mental hospital where the family have admitted her. He is advised by his two brother-in-laws (both of whom were to die in the war) to mutter Drei liter (three liters) instead. After the war we see Kurt’s father, who was forced to join the Nazi party, losing his teaching job and cleaning the floors of Kurt’s school under the Communists. He later hangs himself in the family’s modest home. 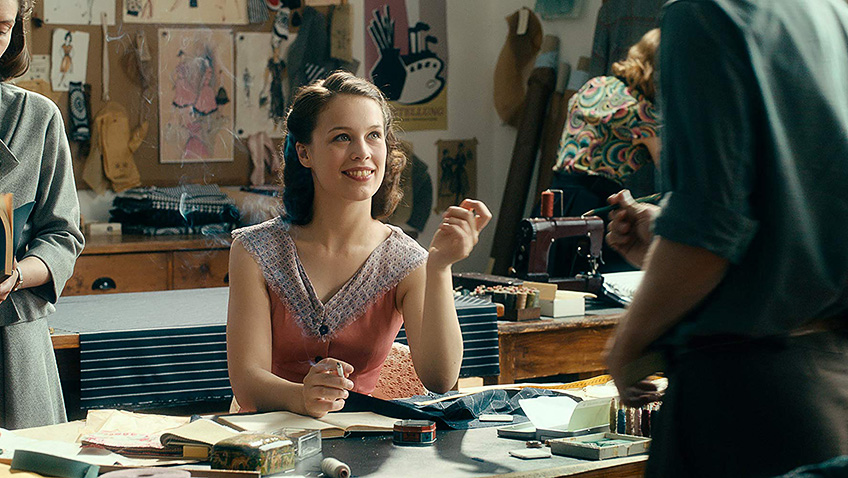 Paula Beer in Never Look Away

The family could never have imagined as they commit Elizabeth for her well-being in 1940 that the Nazi party had begun a sterilization programme for schizophrenic women deemed unfit to breed the Teutonic master race. A mark next to their names further sentences them to death to clear beds for wounded soldiers. The man in charge of the programme is Professor Carl Seeband (Sebastian Koch, The Lives of Others, Black Book, Bridge of Spies) who puts a mark next to her name but refuses to perform the operation himself. One of the great scenes of 2019, it establishes another link between the Seebands and Kurt as Seeband reacts to Elizabeth’s eerily perceptive comments on a childish painting by his daughter that adorns his desk.

Elizabeth is at the heart of the enthralling life journey that follows as Kurt (Tom Schilling, superb) struggles to find himself as a penniless mature artist in East and then West Germany. His romantic meeting and courtship of Elizabeth ‘Ellie’ (Paula Beer) Seeband, a talented fashion student at the Dresden art school, is another highlight of the film, although Ellie’s sinister father disapproves of their union and in a rather heavy handed, but possibly true, turn of events, another sterilization is on the cards.

But all roads lead back to Aunt Elizabeth, even if the striking resemblance between the two women in Kurt’s life named Elizabeth might be dramatic licence. Stifled by the rigid, prescriptive art scene in East Germany, Kurt and Ellie escape to West Germany (which, before the wall, was a matter of no luggage and holding your nerve). When Professor Seeband’s Communist protector retires and warns the doctor who saved his newborn child’s life that he is again at risk of arrest for war crimes, Seeband and his long-suffering wife (Ina Weisse, excellent) also flee to the West. 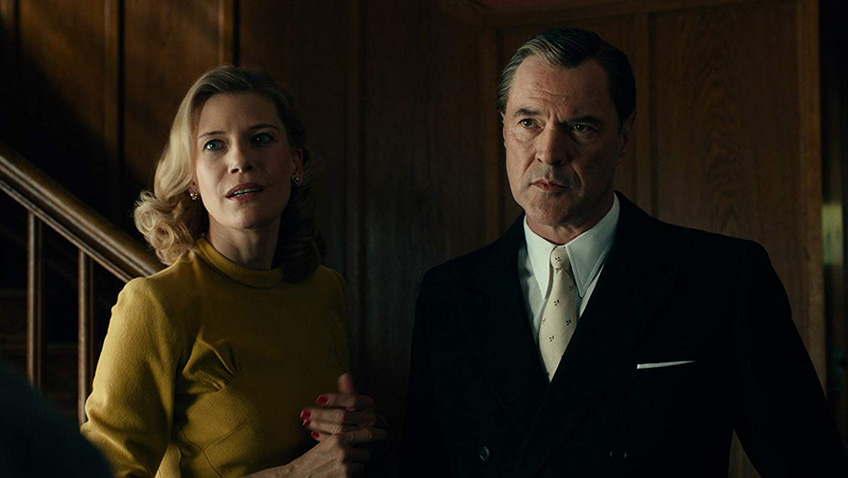 Sebastian Koch and Ina Weisse in Never Look Away

Not long after Kurt enters the avant-garde art scene at the Düsseldorf Academy of Art (despite his age and the school’s mantra that ‘painting is dead’), Kurt’s access to his family photo album and a photo in a new headline exposing Seeband’s boss in the sterilization programme provide the startling breakthrough that enables him to answer the question, ‘who are you?’ That is the question Kurt’s unorthodox teacher Günther Preusser (Hanno Koffler, terrific) asks him after paying Kurt the honour of viewing his work. Preusser is a brilliant reference to the Düsseldorf teacher and artist Joseph Beuys. Under the teacher’s mysterious hat that he never removes, there really is the scarring that validates Beuy’s fictitious war survival story.

At his first solo show, young Kurt disavows any personal connection with a haunting painting entitled ‘Mother and Child’, but it is, as we discover, based on a photograph of Aunt May holding Kurt as a baby. Few admirers of The Lives of Others knew that that film was inspired by the life of poet/songwriter Wolf Biermann. But you can appreciate this masterwork even more if you are aware to what extent this work of fiction is linked to Richter’s journey’s from tragedy to triumph through, what Donnersmarck regards as ‘the healing power of art.’