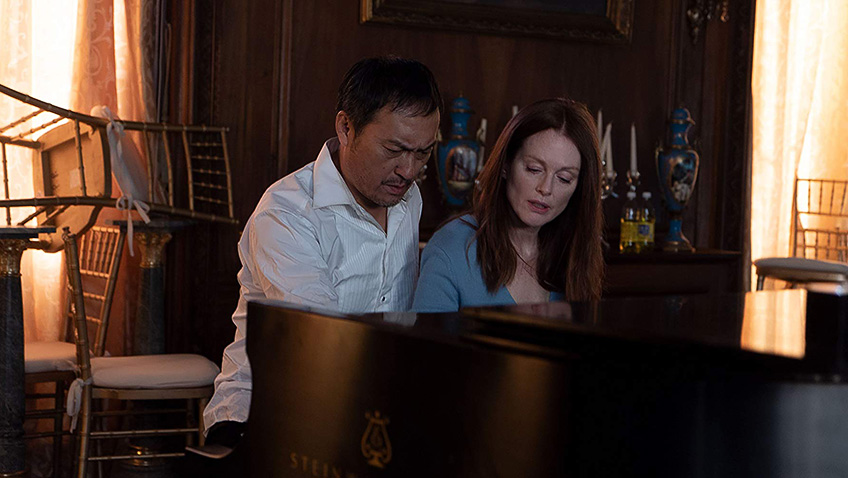 topped the best-seller charts, The New York Times called the novel “a beguiling mix of thrills, romantic-comedy, and a novel of ideas.” That is not how you would describe Paul Weitz’s cinema adaptation. Short on thrills, comedy and ideas, it comes across as a misguided mix of lackluster hostage drama and soap opera.

Katsmi Hosokawa (Ken Watanabe) is a wealthy industrialist whose teenage son can barely remove his headphones long enough to say goodbye to his father. Hosokawa has been lured from Tokyo to a South American country (the film was shot in Mexico and Yonkers, standing in for Lima, Peru) where it is hoped he will build a factory. Hosokawa is obsessed with American soprano Roxane Coss (Julianne Moore) and the country’s vice-president (Eddie Martinez) has arranged for Ms. Coss to perform for Hosokawa and important guests at an intimate gathering in his villa. The president is at home watching his favourite soap opera and the vice-president makes excuses, but Hosokawa has not come to see the President or to do business.

When Coss makes her grand entrance in a revealing gown, Hosokawa is smitten and listens in rapture as she sings. Minutes later, terrorists invade the private party and, in the panic, accidentally kill Coss’s pianist. The attackers agree to the release of women and children with the exception of Coss. Though toxically American, she is kept as a bargaining chip and, more importantly as it turns out, so that the movie has an A-list actress and a female romantic lead.

When the hostages are forced to lie down on the floor Hosokawa slides across the parquet to provide the singer with his jacket for a pillow. A Red Cross negotiator (Sebastian Koch) keeps popping in to negotiate between the hard-line dictator and the people we eventually come to accept as freedom fighters rather than terrorists.

The theme of the movie, the power of music to unite the world and transcend language and political barriers, is nothing if not worthy. Early on the Che Guevara-type rebel leader Comandante Benjamin (Tenoch Huerta) lets his guard down in his appeal to Coss to sing from the balcony after the government cuts off their water supply. At first she refuses, but relents when Benjamin explains to her, in the perfect English he has been reluctant to use, that he was a teacher before his wife and children were taken by the dictator and his wife imprisoned. The rebels all have loved ones who are political prisoners or worse. Perceptions instantly change.

With the ice broken, the action inside the villa heats up, with not one, but two sets of lovers sneaking around at night and a rebel who has missed his chance to appear on Peru’s Got Talent being given singing lessons. Hosokawa seduces Coss with his protectiveness, erudition, and good looks. Gen is seduced by Carmen, an indigenous rebel (María Mercedes Coroy) who asks the affable Japanese translator for very private English lessons. 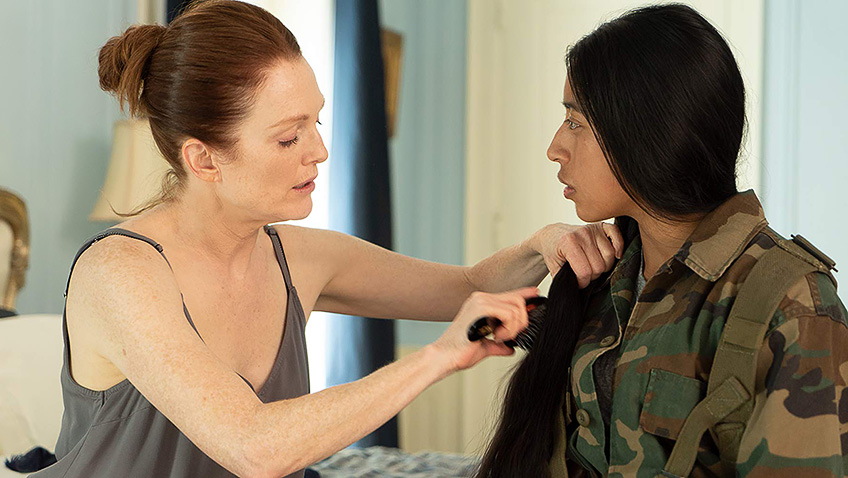 On one enchanted evening, the lovemaking of the two ethnically and racially mixed couples feels a bit like A Little Night Music. A little more chemistry between the lovers would have helped, but we have to take that for granted along with the general bonhomie that results in the hostages and captors playing football (the other unifier) in the back garden, like the Germans and French troops on the Christmas day battlefield in the 2005 film Joyeux Noel (Merry Christmas).

The mixture of languages is realistically handled, with Hosokawa and Coss communicating through Gen and the translator speaking in Spanish to his rebel paramour. Ryo Kase learnt enough Spanish, French, German and Russian to convince us, and the rebels speak Spanish or, amongst themselves, Kaqchikel. 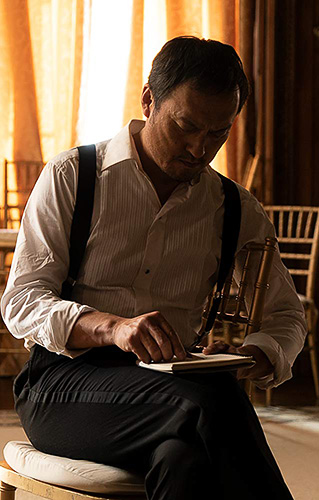 This international peace plea pudding is an odd choice for director Paul Weitz. In addition to American Pie 20 years ago, he is best known for the wonderful character-driven comedy Grandma; the romantic comedy-drama About a Boy and the cringe comedy Little Frockers (directing only). The script, co-written with Anthony Weintraub, is surprisingly lacking in tension for a hostage drama and the second half in particular, turns into a meandering soap opera and love-in until a jarring climax takes us (and the characters) by surprise with a sharp change of tone and pace.

Perhaps the idea is just that, to turn an historic event into both the soap that the negligent president has stayed home to watch and the Verdean opera that Ms Coss might be appearing in The Met had she remained in New York. It is no coincidence that Gen’s daring lover is named Carmen. Sadly, though, the idea does not work.

The book and film are inspired by the 1996 Japanese Embassy hostage crisis in which the Peruvian Túpac Amaru Revolutionary Movement did in fact raid a party celebrating the Japanese Emperor’s birthday to promote their cause. The Japanese embassy was targeted because at that time Peru was run by Alberto Fujimori, a corrupt, human rights violating Japanese/Peruvian President. As in the film, women, children and foreigners were released and the hostages were treated a lot better than were the rebels who surrendered for clemency.

What works less well on the screen than it might have in the novel is the opera singer character. Moore gives another nuanced and convincing performance, but Renée Fleming’s dubbing works against her as it sounds and looks like dubbing.

There is also something creepy about the romance. Hosokawa is a fan who has fallen in love with Coss for her voice before he even met the woman; like a teenager kissing the poster of Ariana Grande over his bed. Hosokawa exchanges a few words with her through a translator but nothing she says is as important as how she sounds and looks. In fairness to Coss, in such uncertain and dangerous circumstances, she might be happy to confuse the infatuation and idolatry for something more.