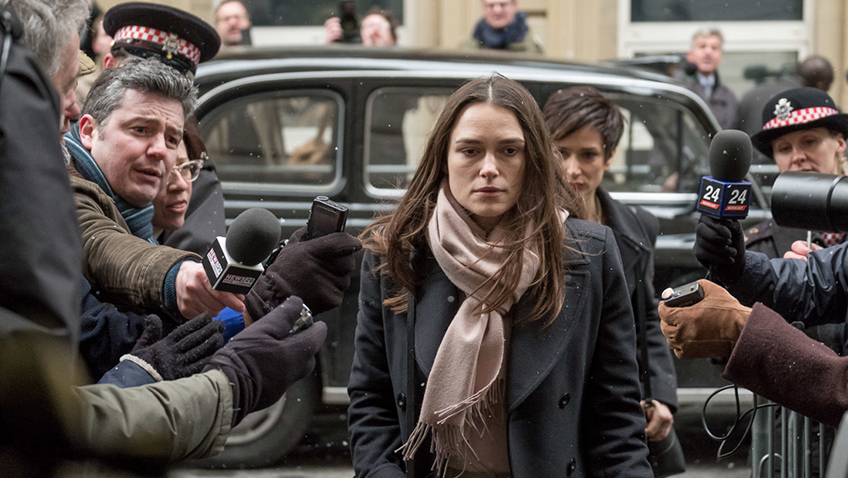 Any political and/or courtroom thriller is more interesting when centered around a moral conundrum that prompts us to ask ourselves, ‘what would I do?’ We find this in two of director Gavin Hood’s films about the ‘War on Terror’, Rendition and Eye in the Sky. With Official Secrets

, Hood gives us all this and more, because not only is the film a true story, but the protagonist (played by Keira Knightley in her best role since Bend it Like Beckham) is someone most of us can identify with.

Katherine Gun (Knightley) is, in many respects, an ordinary 28-year-old UK citizen, holding down a skilled job, married to a loving husband, and living a quiet life in Cheltenham. She sits in front of the television in her pyjamas shouting, ‘it’s all a bunch of lies’ at the BBC reports showing Tony Blair talking about weapons of mass destruction. At least half the population will remember watching those broadcasts.

That’s not the whole story, though, as Katherine, as we learn when she is questioned by her superiors, was born in Taiwan to British parents and grew up speaking Japanese and Chinese which she studied in University. And her job and marriage are not all that ordinary. Katherine is married to Yasar (Adam Bakri), a Turkish Muslim whose right to remain is apparently dependent on his marriage, and therefore, suspect. And Katherine works as a Mandarin translator at GCHQ’s surveillance centre in Cheltenham where she signed the Official Secrets Act.

Then on 31 January 2003, a fateful day that begins like any other, Katherine and her colleagues receive an unusual memo from a Frank Koza, from the United States National Security Agency, announcing that the staff are to listen in on the six ‘swing countries’ on the UN Security Council so that America can ‘persuade’ them to approve the invasion of Iraq. The memo seems to violate the Geneva Convention.

If Katherine’s colleagues are bemused and shrug their shoulders, Katharine is outraged. She knew little of her job before answering an advertisement that would finally enable her to use her language skills. But her moral compass is spinning and, hoping to wash her hands of the burden of responsibility she feels, she leaks the memo to a contact of a contact at The Observer newspaper.

The Observer scenes are as dramatic, entertaining and nearly as life-like as those in Spotlight. A scene in which the idiosyncratic correspondent Ed Vulliamy (Rhys Ifans) tries to track down and interview the mysterious Frank Koza in Washington would not be out of place in a John Le Carré novel, were it so hilarious. Martin Bright (Matt Smith) persuades his sceptical editor Roger Alton (Conleth Hill) to publish the memo in his article, which appears with the provocative headline, ‘US Dirty Tricks to win votes for Iraq.’ The article turns Bright into a celebrity, for just a little longer than Andy Warhol’s 15 minutes. 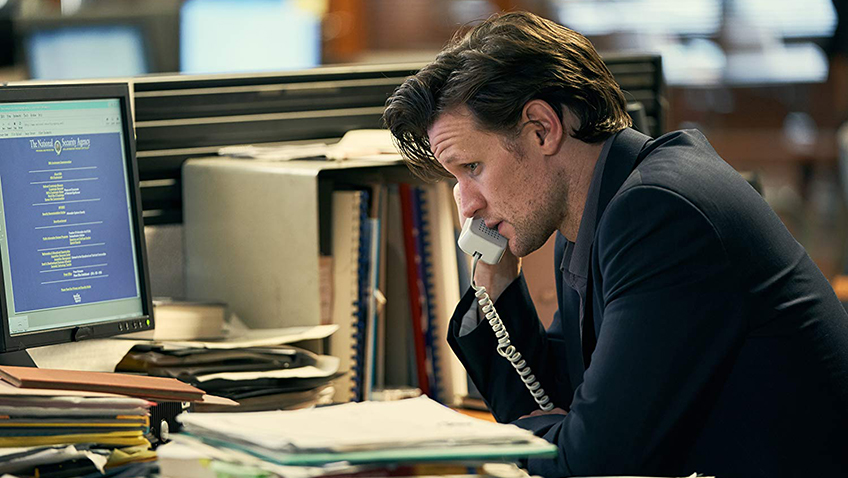 The backlash begins when a sharp-eyed journalist notices the British spelling of ‘’favourite’ and ‘recognise’ and people begin to suspect Human Rights campaigner Yvonne Ridley (Hattie Morahan) – with whom Katherine does in fact meet, in an underground garage – as the person behind the fake letter. The young staff member who owns up to the ‘spell check’ mistake, is apparently spared the sack.

Unwilling to put her colleagues through interrogation and surveillance, Katherine confesses and is arrested, while Yasar, tries in vain to help his wife, while angry that she has put his life at risk. Katharine acts out of principle, telling the police, ‘I work for the British people. I do not gather intelligence so that the government can lie to the British people.’ She is released pending being charged for breaching the Act.

Approaching Liberty for legal guidance, Katherine finds herself in a Catch-22 situation when lawyer Ben Emmerson (Ralph Fiennes) realises that, as a signatory to the Act, she cannot reveal any classified documents to her defence team. Meanwhile, Katharine cannot find a job, her friends distance themselves, and she returns home to find Yasar has been transported to a remote immigration detention centre, about to be flown back to Turkey.

Even if you remember the story, try not to read up on it before seeing the film. Official Secrets

is not only more exciting and cathartic, but the facts have been carefully researched and backed by Gun with whom Hood consulted. 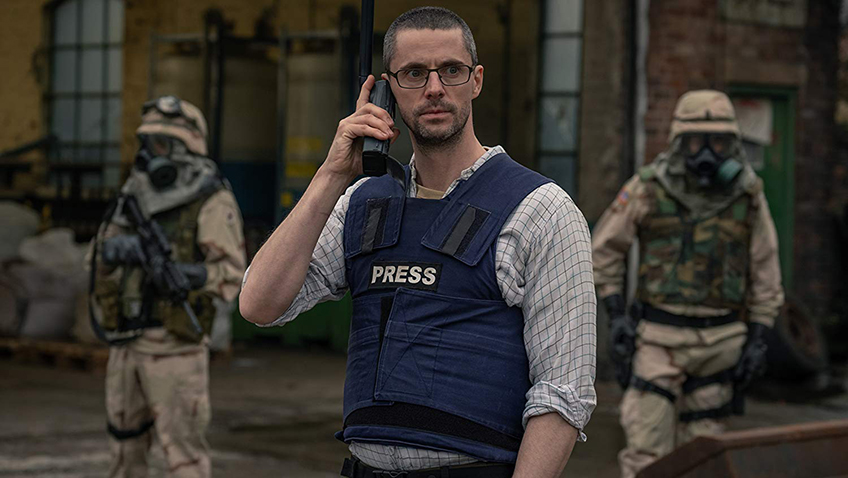 Avoiding dry exposition, Hood unfurls Liberty’s strategy so clearly and dramatically that you feel like you are hearing the story for the first time. Based on The Spy Who Tried to Stop a War

by Marcia Mitchell and Thomas Mitchell, the script, by Gregory Bernstein and Sara Bernstein and Hood, turns what begins as a political and press drama into one of the best courtroom dramas since the Holocaust drama, Denial.

This is not the first time Hood has made a legal drama based on a true story. In his South African film, A Reasonable Man, released just before his Oscar winning Tsotsi, a defence attorney uses a defendant’s culture and community values to defend a young herdsman who is accused of brutally killing a one-year-old child, believing it to be an evil spirit.

Emmerson’s defence of Gun, who has, after all, confessed, is equally risky. There is only one defence to breaching the Official Secrets Act, and that is ‘necessity.’ Gun must choose between a lesser sentence in pleading guilty or pleading not guilty by reason of necessity. For Gun, who has no regrets, it’s a no brainer. If anyone is guilty, it is Frank Koza, Tony Blair and George Bush. Emmerson sets out to prove that Gun’s necessity was stopping her country from starting an illegal war.

The Report, that will be released in November, is another first-rate political thriller, based on the true story of the cover-up of the US post-9/11 torture centres where a government researcher’s personal life is turned upside down by a CIA conspiracy to cover-up the truth. He chooses not to leak his report as a whistle blower, but to rely on his boss, Senator Diane Feinstein, to publish it as an official channel.

At a Q & A, The Report director Scott Z. Burns commented that the number of whistle blowers coming forward is not a good thing because it means the system isn’t working. This issue is not explored as fully as it might have been in Official Secrets

. But Knightley’s fine performance helps us understand how a principled young woman gets in over her head. She intended only that the paper would investigate, not publish, the memo and alert the country to the alarming fake news.