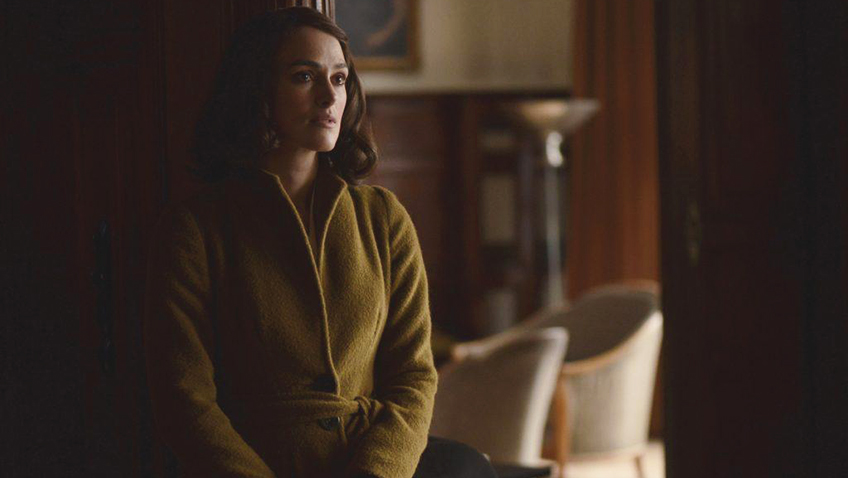 An illicit love affair in post-war Hamburg makes for a clunky, old-fashioned weepy

If the real story of British Forces Germany Colonel Walter Brook’s six year posting in post war Hamburg had been adapted for the screen, it might have been a Disney musical (perhaps the new The Sound of Music) with a U rating rather than the melodramatic illicit romance between a German widower and a grieving Colonel’s wife that James Kent competently delivers, in The Aftermath

The novel, written by Colonel Walter Brook’s youngest son is not the true story, for there were no affairs and no widowers. The true story is a genuinely inspirational story of reconciliation. Brook’s family were allowed to requisition businessman Wilhelm Ladiges villa, forcing Ladiges, his wife and their three children (12, 7 and 5 years old) to move to purpose-built huts with thousands of homeless Germans. As Brook was in charge of reconstruction, feeding, housing and the de-Nazification of the displaced survivors, he took the first step by inviting the Ladiges to live on the first floor of their home, while Brook and his wife and three children lived below.

James Kent did an admirable job adapting for the screen Vera Brittain’s sprawling favourite, Testament of Youth and does a respectable job here, too, turning out an old fashioned weepy with all the melodrama of a period film from Douglas Sirk. But Kent is hamstrung by the clunky script by Joe Shrapnel and Anna Waterhouse and Martin Phipps’s emphatic-to-the-point-of-parody score. Perhaps time and budget were issues, too, as truncated sub-plots are not developed, and confusion arises over the passage of time, while people – and even a cabin in the woods – appear out of nowhere.

Germanophobic Rachael, (Keira Knightley) grieving the death of her 11-year-old son in the London blitz, and suffering survivor’s guilt, has arrived in Hamburg to join her husband Lewis Morgan (Jason Clarke) who represents the British government in charge of the post-war reconstruction of the city. Their awkward reunion takes place against images of people in rags foraging through the rubble for the remains of their homes and possibly their loved ones.

Much to Rachael’s dismay, Lewis invites the owner of the 17th century villa he has requisitioned to share the house with the Morgans. Stefan Lubert (Alexander Skarsgård, The Legend of Tarzan) lost his wife in the bombing of Hamburg and lives with their 11-year-old daughter, Freda (Flora Thiemann). Audiences will immediately grasp the neat contrivance as the Morgan’s lost their 11-year-old son in the London blitz as a kind of quid pro quo.

If Rachael’s journey and character arc is one from holding all German’s responsible for her son’s death to planning a new life with a German widower, Freda has to undergo a similar journey. Though only 11, she is being groomed by a handsome neo-Nazi who is hatching a plot to assassinate the Colonel and she helps out by stealing a keepsake dear to Lewis and Rachael.

The bonding – over a piano piece that, coincidentally both Freda and Rachael’s son struggled with – between Rachael and Freda is remarkably quick, or else the film lacks a sense of time passing.

This is just as well, as Freda’s sexy dad, who has been changed from a businessman to a more interesting architect in the film, is making progress with bonding, too. At first, relations are frosty and Rachael finds a chaise longue objectionably uncomfortable. Stefan, the perfect condescending German intellectual explains that what she has sat on is a revered Mies Van der Rohe original from the Bauhaus school of architecture. You have to wonder, since his wife was from a rich shipping family, why Stefan did not build the couple a Bauhaus-style house where the Van der Rohe chaise longe would have been more appropriate.

The first awkward moment comes when Stefan is invited to join a dinner party downstairs with the obnoxious army wives and inebriated, Germanophobic husbands and a row ensues. But the curious bit is that Lewis is called away to handle riots in the city and no one seems remotely interested. The riots are pretty big news, but when Lewis gets home exhausted, Rachael does not even ask about them. In fact, Rachael shows no interest in any of her husband’s fascinating work and is more interested in what gown to wear to a British Forces party (settling on one that could have fed 100 families for a week).

To escape the pressure of sneaking around the house, while Lewis is away on a mission, Stefan and Rachael go frolicking in the snowy woods and end up in a cabin where, if the heating isn’t on, the beds have clean sheets ready to be warmed up. One has to wonder why Stefan and Freda didn’t go live in this empty hideaway if it belongs to them. But one first has to wonder why Kent dramatises the entirety of Lewis’s mission to find a murderer only for nothing to come of it.

A scene that would have had added much needed tension were it not so badly edited occurs when Freda’s neo-Nazi friend is sent to assassinate Brook as he drives home on a dark, mountain road with Rachael and Lewis’s assistant. Suddenly Lewis is running through the trees down to a lake with Rachael following in a scene lifted, but not very well, from the devastating real-time assassination scene in Berlusconi’s The Conformist. Out of the blue, Freda appears, although, oddly, Lewis seems less surprised to find her there than we are.

The three leads do their best, but Knightley gives the same performance she did in Atonement. If there is some chemistry between Knightley and Skarsgård the rift between Rachael and Lewis is all too convincing. In an admirable climactic scene, Clarke is given time to claim his emotional stake in the story as the brave soldier who left his wife to grieve alone as he could not face their loss.