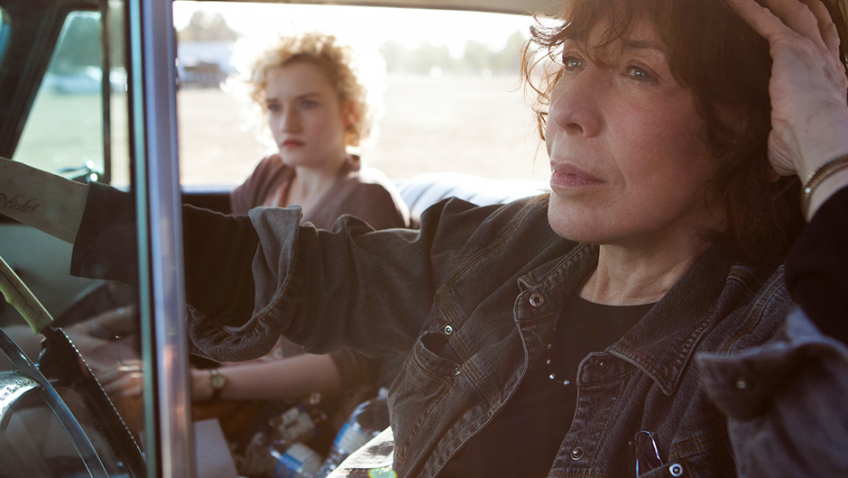 , a bitter-sweet comedy that is as funny as it is moving. For this grandma is not in a care home, in hospital with an interminable disease, pensioned off in a villa on a lake, or a dependable rock who dotes on her family with no financial worries. This grandma is a feisty, acerbic poet and blustering baby boomer still fighting the establishment with a fading reputation and a diminishing bank account. Lily Tomlin’s (Nashville) first leading role since Big Business (with Bette Midler) 27 years ago is worth the wait. In Grandma

, Tomlin does what so many male actors her age have failed to do: stage a great come-back in a film that is not only a fitting vehicle for her talents, but is more than just a vehicle for a star.

The film has something of Jason Reitman’s Juno about it when 18-year-old Sage (the luminous Julia Garner) asks her grandmother, Elle (Tomlin), to pay for her abortion, scheduled for 5:00PM that day. Sage, brought up in a world of credit cards, is angry that her grandma does not have access to the $630 she needs, but Elle’s torn up card is now a wind chime hanging from her Los Angeles canyon bungalow.

Sage dares not turn to her perfectionist, workaholic single mother (Marcia Gay Harden) who takes after Elle in more ways than either would care to admit. So she turns to her non-judgmental, non-conformist grandma for help.

This simple plot enables Sage and Elle to embark on a character-driven road-trip around Los Angeles to raise the money. The plot might be predictable, but nothing else is. Not all the stop-offs are as funny as Elle’s hilarious encounter with Sage’s loser boyfriend (Nat Wolff), or as poignant as her reunion with well-off Karl (Sam Elliott, wonderful), but they all shed light on Tomlinson’s character in a non-expository manner.

As for the reunion scene, Karl’s anger and emotional wounds shine a new light on Elle’s freewheeling lifestyle as well as on the abortion issue (which comes up again with protesters in front of the clinic, as in Juno). It’s one of those scenes -starting off lightly and ending up ripping you apart – that stands out, even in a film with an impressive number of stand-out confrontational scenes. 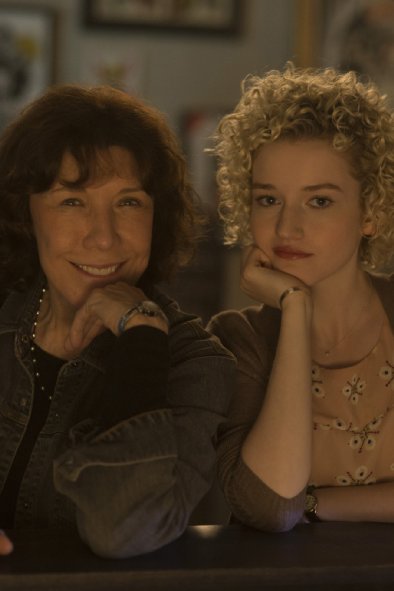 By the end of the road trip, Elle is a fully-formed character, real in all her foibles and contradictions: her selfishness, her generosity, her evasiveness and her heroic strength. And as she embarks on a long walk home with an ironic laugh, having been abandoned by a taxi driver, we finally understand what has driven her to sever so callously her relationship with a much young lover (Judy Greer) at the start of the film.

Sam Elliot’s scene with Tomlin might be a showstopper, but equally impressive is Marcia Gay Harden, an actress who, at 56, is seldom on our screens. Harden plays Judy who has reacted to her own upbringing by becoming the total opposite of her mother. In a scene worth the price of admission, Judy stumbles off her office treadmill at the news of her daughter’s predicament, screaming at her PA for a caffeine hit that she obviously does not need. Harden handles the shifts from comedy to contrition so smoothly that it seems completely natural and spontaneous.

It is Weitz as writer/director who deserves much of the credit for managing to avoid sentimentality in handling intimate relationships and situations while refusing to make a big issue of Elle’s bi-sexuality. This is a low-budget film that packs a much larger punch as it tackles topical issues of modern day family life and lets its wonderfully fresh characters grapple with them.