Home / LIFESTYLE / REVIEWS > / FILM REVIEWS / Cancel all your plans and go see this superb romcom based on a true story! 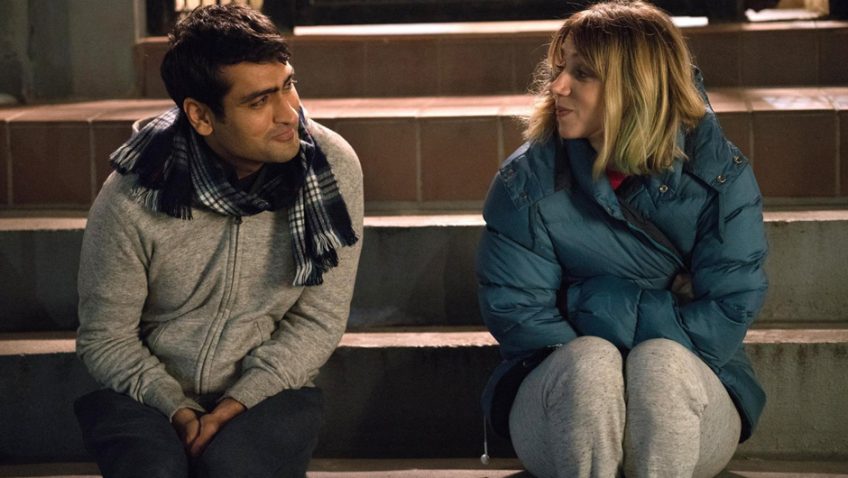 Cancel all your plans and go see this superb romcom based on a true story!

The last time a man fell in love with a woman in a coma was in Pedro Almodóvar’s Talk to Her back in 2002. The Big Sick

is a healthier collaboration, written by the real husband and wife team (Kumail Nanjiani and Emily V. Gordon) behind what might be the most entertaining – and, despite the title – feel good stories of the year. Let me go one step further: The Big Sick

is arguably the best romantic comedy since the magical chemistry between Goldie Hawn and Mel Gibson sizzled on the screen in Bird on a Wire 27 years ago.

Emily (played by the superb Zoe Kazan, The Savages, Meek’s Cut-off) is a graduate student in psychology who heckles Pakistani stand-up comic Kumail (playing himself) at a Chicago gig. ‘Is there a Pakistani in the house?’ Kumail asks, as a standard part of his routine. He hears a distracting shout and traces the voice to a radiant, though not classically beautiful, young woman in the audience. ‘You’re not from Pakistan,’ Kumail states, somewhat disarmed. And then he adds, without missing a beat: ‘I would have noticed you.’

This spontaneous double-entendre, expressing the obvious racial joke, ‘anyone would have noticed an outspoken white woman in Pakistan,’ and the much more personal, ‘I would have singled you out across any crowded room,’ is consistent with one of the most nuanced, humorous and perceptive scripts of the year.

After his set, Kumail approaches the young woman to lecture her about heckling, a charge she denies. When the banter turns sexual, Emily’s girlfriend slips off leaving the two strangers alone to deal with what is obviously love at first sight.

Although both Kumail and Emily would disagree with that statement, there is no denying the physical attraction. When they go to Kumail’s shared flat that evening to watch a horror classic, they cannot keep their eyes on the screen and off one another for ten seconds.

Emily is upfront with Kumail, who is taking her home in the taxi he drives while his stand-up career takes off. ‘I’m not really dating anymore,’ she states emphatically, explaining that she is intent on her exams and forging a career. She does not mention until much later that she was briefly married and only recently divorced. Kumail is equally non-committal and comes up with his two-consecutive-days rule of dating. The real barrier to acknowledging his true feelings for Emily, however, is far more difficult to ignore.

In humorous (if slightly repetitive) scenes at the Nanjiani family’s dining room table, Kumail’s mother (Zenobia Shroff) pretends to be surprised when the doorbell rings, and a suitable single Pakistani Muslim woman is at the door. Kumail endures this painful ritual displaying no enthusiasm for the poor women, but never telling his parents about Emily. His brother Naveed (Adeel Akhtar), who has married a pretty Pakistani Muslim woman, tells Kumail that he will be disowned by the family. Holly Hunter and Ray Romano in The Big Sick

Emily, however, has not only told her parents, Beth (Holly Hunter, Manglehorn, The Piano) and Terry (Ray Romano, TV’s Everyone Love Raymond) about her growing feelings for Kumail, but she has also told them about their break-up when Emily discovers a stash of souvenir mug shots of Pakistani women in Kumail’s room.

So the stage is set for one of the most awkward meetings in the annals of cinema when Kumail receives a call from Emily’s best friend, informing him that Emily has been rushed to the hospital and put in a medical coma. When Kumail shows up, Beth and Terry give him the evil eye and then the cold shoulder as though his treatment of Emily brought on the rare systemic autoinflammatory disease, Adult-onset Still’s Disease (AOSD).

When Emily’s parents thank him for coming, but suggest he leave, never to return, it would have been easy to comply and resolve his family problem. But it is more than a sense of doing what is right, or of atonement that prevents him from leaving…

Although I would advise against watching the trailer, the film is just as good on a second viewing. It is not just the strange true story that makes the film, but the witty and revealing dialogue; the bonding between Kumail, Terry and Beth, and the extraordinary chemistry between all of the characters, from Emily’s and Kumail’s respective parents (his father is the wonderful Anupam Kher from Bend it like Beckham) to the central couple. It is rare to see this much chemistry on screen and it pays dividends.

is a directorial feature breakthrough from actor-producer-writer and director Michael Showalter. Showalter is working for the film’s Producer Judd Apatow (Bridesmaids, Cable Guy, Pineapple Express) who knows all about talent and was the first to recognize the potential in Nanjiani’s life story. Showalter is an actor’s director and while the film’s behind-the-scenes-at-the-comedy-club scenes might look improvised and easy, they are notoriously difficult to get right unless you have been there and done that.

Zoe Kazan might have the hardest job: portraying the real-life girlfriend of Kumail who plays himself in parts written by him and his real girlfriend, Emily Gordon. Kazan is superb and it is impossible not to fall in love with her a little bit, too. At times, particularly in the scenes with Terry and Beth, the incredibly talented Kumail seems as though he is not acting but reliving this tumultuous period in his life. He delivers his lines so naturally that they never appear as ‘one liners,’ but as a manifestation of his personality.

But it is Ray Romano and Holly Hunter (not an obvious pairing) who might just steal the show. The insightful script provides the anguished parents with several wonderful scenes where we know, without expository explanations, that their thoughts and reactions are really misdirected outlets for their pent-up fears and grief. In one hilarious scene, the diminutive Beth attacks a stocky young man at the comedy club when he hurls a racist heckle at Kumail – the man she could barely speak to hours earlier. Hunter, now 59, is surely in line for a best supporting actress award at this year’s Academy Awards.