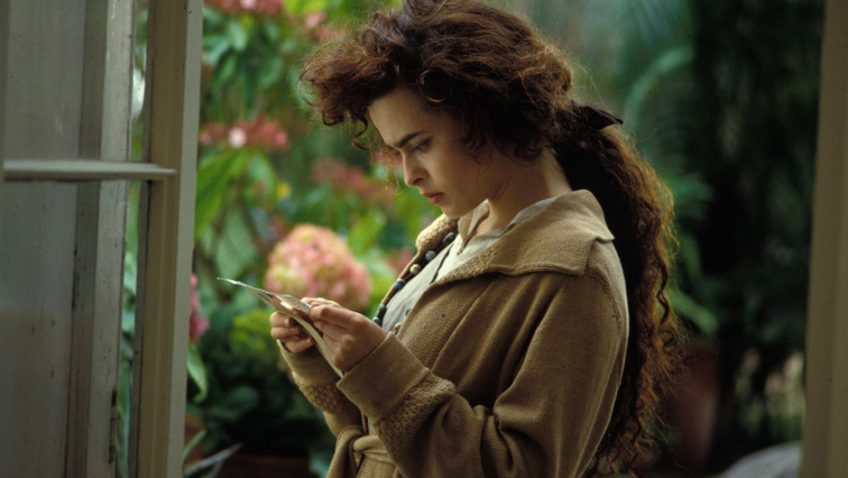 For over 40 years more often than not you could find a ravishing, sophisticated, intelligent film in your local cinema from the triumvirate of producer Ismail Merchant (d. 2005) director James Ivory and novelist/scriptwriter Ruth Prawer Jhabvala (d. 2013). Jhabvala, had a hand, if not solo credit, in 23 of their 44 films, while their not-so-silent partner was the composer Richard Robbins (d. 2012). And all four, along with the British actors they would work with repeatedly – Emma Thompson, Antony Hopkins and Helena Bonham Carter – excel in their 1992 EM Forster adaptation of Howard’s End.

The BFI have provided us with a pristine new print of their most psychologically complex film about the British class system – and a timely film about the British property market. It awaits you in selected art house cinemas, and whether you haven’t seen the film in years, or have never seen it on the big screen, don’t miss this opportunity.

, no compromise is evident. Britain’s highest paid stars would reduce their fees to work for them, and the novels they adapted were out of copyright. Even more than their other most celebrated literary adaptations, A Room with a View (1985) and The Remains of the Day (1993), Howards End

can arguably boast the most impressive production design in the Merchant Ivory filmography. Those were the days when a film with no big action set pieces, no wars, no stunts, no explicit sex, and no CGI could be nominated for 9 Academy Awards and win three, including Best Actress (Emma Thompson), Best Adapted screenplay and Best Art Direction for Luciana Arrighi and Ian Whittaker.

There are three social circles in Howards End

, and the wonder of the film, and of course, Forster’s source novel, is how organically the three come together: politely at first, and then turbulently clashing when the stakes are high.

The free-spirited Schlegel sisters, Margaret (Thompson) and her younger sister, Helen (Helena Bonham Carter), attribute their creativity (‘we’re not odd, we’re just expressive’, Margaret says) to their German roots. A household of women, the sisters live with their mother in a middle-class apartment, with the requisite Edwardian clutter and loyal housekeeper who cleans and cooks.

When the film begins, however, Helen is staying with the Wilcox family at Howard’s End, where her engagement to the youngest son of Henry (Hopkins) and Ruth Wilcox (Vanessa Redgrave) looks set to change the make-up, and status, of the family. But Helen’s happiness is short lived when the engagement is broken off for reasons of the younger son’s inferior inheritance. It’s clear that Helen, while admired, is not a suitable match.

Howards End, a rustic, relatively small farm house in beautiful countryside is Ruth’s favourite of their many properties, and when the family temporarily find themselves in a flat across from the Schlegels in London, Ruth complains incessantly. She is unwell and longs to spend her last days at Howards End. In London Ruth and Margaret not only renew their acquaintance, but, on a whim, head off together by train to Howards End, only to be intercepted at the station by Henry. It is, however, Ruth’s dying wish that Margaret is to inherit her farmhouse. And it is the Wilcox family’s refusal to honour the legally unenforceable wish that drives the story line.

The third social circle is represented by Leonard Bast (Samuel West), a poor, but very bright and hard working young man who meets Helen at a lecture on Beethoven over a mix-up of umbrellas. The Schlegels are not only involved with the suffragette movement, but they are concerned about the plight of the poor (widely publicised and criticised by Charles Dickens and other influential Victorians) and their exploitation by the wealthy.

When the Schlegel sisters run into Henry Wilcox, they speak to him about their new friend, Leonard’s, potential. The plan backfires on Leonard, who is ignorant of the women’s good intentions. The plan is, however, the beginning of Henry’s interest in Margaret.

The liaison between Margaret and Henry changes the dynamic of the three class structure and affects the relationship between the sisters forever. But if Henry finds himself under Margaret’s spell for the better, Margaret finds herself under the thumb of her new husband, for the worse. And Helen finds herself drawn to Leonard, despite the existence of his wife Jacky (Niccola Duffet), a former prostitute who dutifully stays at home all day and seems to pose no problem.

Unbeknown to anyone but Jacky, however, has met Henry Wilcox. When it comes to shameful secrets, however, a rich man can hide, while a vulnerable, poor woman is easily discredited.

The art and production design, the exquisite costumes (Jenny Beavan and John Bright) and Tony Pierce-Roberts’ sumptuous cinematography, come together to create these three social worlds without which the story would make no sense. And more perhaps than the words, it is the visual look of the three contrasting worlds – Wilcox’s ornate, gilded and spacious mansions; the Schlegel’s comfortable, lived-in, urban townhouse and Leonard and Jacky’s cramped, uncomfortable two-room flat over a noisy train line – that help define the characters and that stick in our mind.

is the story of values at the height of the industrial revolution and of how money and privilege make hypocrites of us all. Forster (and the filmmakers) ingeniously enriches the story by adding into the mix the beginnings of the sexual revolution, with Margaret struggling to retain her independence in her privileged marriage and Helen choosing to bring up a child on her own. The film poses the question of whether it is possible for a man and a woman from different class backgrounds to find common ground without sacrificing their souls. If this conundrum has been the subject of films before or after Howards End

, it has never been more intelligently and beautifully dramatised.