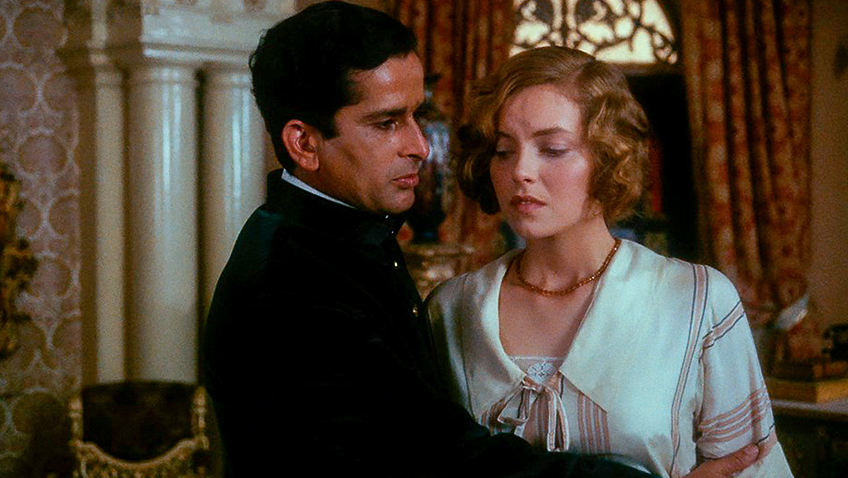 What better way to entertain us during Lockdown than with this Merchant Ivory selection from Curzon Home Cinema, recently remastered for theatrical release? Ideally this unique British production company’s gorgeous period films should be seen on the big screen, but a large television screen, and the chance to binge on some of their lesser known fare is not bad. The Bostonians and The Europeans make a great double bill, or for a steamy 18 rated double bill, try the controversial, ground-breaking Maurice paired with Quartet in which Dame Maggie Smith and the late Alan Bates (both 47) hook up with the 26-year-old French super star Isabelle Adjani in 1920’s Paris. We also recommend catching Greta Scaachi’s sizzling breakthrough in Heat and Dust, that makes this atmospheric Merchant Ivory Raj saga a must

If you have never seen Heat and Dust, or have not seen it since it was released to critical acclaim (and a Best Adapted Screenplay BAFTA), now is your chance. The cinematographer was the late Walter Lassally, who won an Academy Award for Zorba the Greek, but is also remembered for Tony Richardson’s The Loneliness of the Long-Distance Runner and Tom Jones.

Merchant Ivory Productions (MIP) has always been associated with India, and not just because producer Ismail Merchant was born in the country; or that director James Ivory felt drawn to the works of EM Forster. It was, after all, David Lean, and not MIP who took on Forster’s A Passage to India. The authenticity of Heat and Dust comes from their silent partner, the late author and scriptwriter Ruth Prawer Jhabvala, a German Jewish refugee to the UK who married an Indian architect and lived in India for nearly 25 years. Although never comfortable living next to extreme poverty, Jhabvala observed the westernisation of an emerging Indian middle class that no doubt influenced such films as Mira Nair’s 2001 Monsoon Wedding and Gurinder Chadha’s 2004 Bride and Prejudice. Her wide-ranging screenplays helped Merchant Ivory win six Academy Awards over a unique collaboration lasting 50 years.

Ruth Prawer Jhabvala’s work for director/script writer James Ivory and the late producer Ismail Merchant began in 1960 when they asked her to write the screen adaptation of her book, The Householder , which was set in Delhi. Some twenty years later, Merchant produced, and Ivory directed Jhabvala’s adaptation of her Man Booker Prize novel, Heat and Dust, shot in English with Urdu and Hindi.

The film caught the zeitgeist of early 1980s Britain, sandwiched between Gandhi of 1982 and the miniseries The Jewel in the Crown, The Far Pavilions and David Lean’s feature film, A Passage to India all released in 1984.

While Julie Christie’s name is top of the marquee, Heat and Dust was the breakthrough film, and first major role, for Greta Scacchi (The Player, White Mischief). She not only looks great in Barbara Lane’s 1920s modified flapper costumes, but is persuasive in the role of Olivia, the naïve, but open-minded, energetic, and curious young wife of British colonial official, Douglas Rivers (Christopher Cazenove).

Olivia is reluctant to join the British memsahibs – who bore her to tears – in their exodus to Simla over the blistering hot summer. Olivia is happy to face the inhospitable climate of Satipur, in central India: it is her husband Douglas’ frequent absences, and the stuffy, narrow-minded colonials – epitomised by the racist Doctor (Patrick Godfrey) and Mrs (Jennifer Kendal) Saunders– that she cannot stand.

So, it is perhaps no surprise that, when the well-educated, impeccably dressed, and imposing Nawab of Khatm (Shashi Kapoor) offers to show her around “the real India”, she responds enthusiastically. Of interest, perhaps, in real life Shashi Kapoor was married to Jennifer Kendal (Felicity’s sister) who was to die of cancer within two years of the release of Heat and Dust. He never recovered from her untimely death.

A mutual friend of the Rivers and the Nawab, Harry Hamilton-Paul (Nickolas Grace) is a permanent guest at the palace and is even tolerated by the Nawab’s chain-smoking, domineering and all-seeing mother, Begum Mussarat Jahan (Madhur Jaffrey). Hamilton-Paul is a kind of go-between and confidant to Olivia and the Nawab, being a companion at both households. If he is a needy man, he is easy-going, discreet, and non-judgmental, perhaps because he is homosexual and has come to value discretion.

The Nawab and Olivia progress from their daily sightseeing and socialising to a clandestine affair which appears less passionate than convenient. Things get complicated when Olivia finds herself pregnant and has no idea what the baby’s colour will be. The Nawab wants an heir and what better than a mixed-race heir, but it would shame Douglas. Moreover, the Nawab is suspected of supporting marauding bandits from his still independent princely state who are attacking the forces of the Raj. The British are considering retaliation that would oust the Nawab.

Anne (Christie), a BBC researcher whose great-aunt is Olivia Rivers, tells this story (in flashback) with the help of an elderly Hamilton-Paul whom she is interviewing in her English garden in 1982. Anne inherited Olivia’s letters and diary and, being a researcher, decides to travel to Satipur to find out what happened to her Great-Aunt, estranged from, and lost to, the family.

It is this interwoven plot line, with Anne’s experience in India mirroring Olivia’s in an approximate, but updated manner, that is the film’s weakness. Anne is not a well-defined character and is neither particularly likeable nor even interesting. She reacts passively to everything, even ending up with Chid, a tedious American sanyasi and would-be convert to Hindu mysticism, staying in her accommodation with designs on her bed. Anne’s gratuitous affair with her landlord, Inder Lal (Zakir Hussain) a civil servant married to a child-bride with epilepsy, is unconvincing – perhaps because it is so underdeveloped. There is no chemistry between the pair and their affair seems to be orchestrated by Anne, either to follow in the footsteps of her Great-Aunt or out of boredom. The sentimental and creepy ending is nothing if not contrived.

If the 1982 strand starring Christie were intended to show that a woman’s lot in India had not improved much in the 50 years between Olivia and Anne, or indeed, that progress has been made, it is not persuasive. Anne is a middle-class British woman of means who can always go home, and we do not meet many other women from 1982. How I longed to return to the 1923 strand and explore the fascinating issue of the Nawab’s suspected collaboration with the rebels. This could have been developed into a political mystery, making the 1923 inter-racial affair more romantic and the Nawab more enigmatic. We are still over 20 years before Partition, but the natives are already restless, and Olivia is caught between two worlds.

You can watch the film by clicking here.