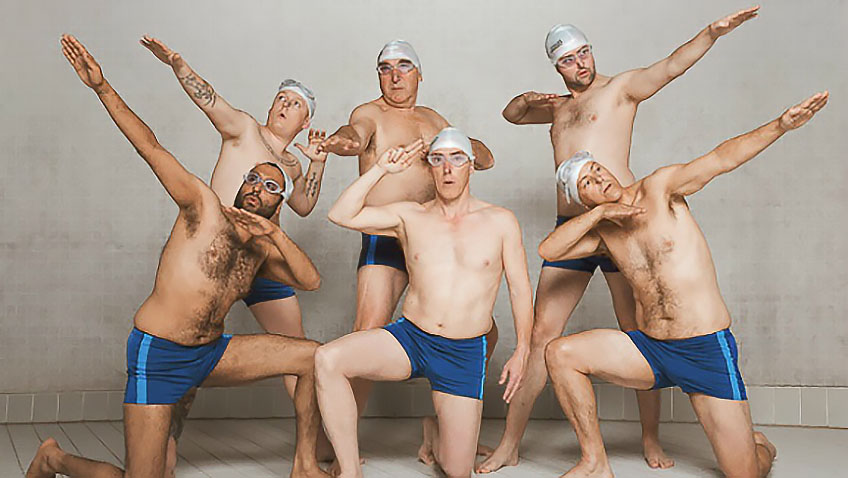 Swimming with Men is a British comedy directed by Oliver Parker (Dad’s Army, St Trinian’s 2: The Legend of Fritton’s Gold) about a group of middle-aged (and a couple of younger) men drifting through life rather than living it. They enjoy the camaraderie of synchronised swimming practice, but find a purpose for and a new perspective on life, and a sense of achievement when they enter an international competition. It is refreshing to see a film about male friendship that does not involve toilet humour with the only ‘love interest’ being a serious female coach, but not refreshing enough to excuse the shortage of laughs, particularly in the second half. The film cannot but remind us of The Full Monty but with nothing as tangible as jobs and dignity at stake.

Eric (Rob Brydon, providing most of the humour in the film), husband, father and valued forensic accountant for a large film is, unlike the band of brothers in The Full Monty, secure in his job. He is less secure in his marriage to Heather (Jane Horrocks) since she started running for election to the local council and winning.

This conflict appears contrived to spur on Eric’s life changes, as he has no reason to suspect her. ‘Why are you being weird?’ Heather asks, and she is not alone. We must be satisfied that either Eric is bothered that she has a private professional life, which makes him a bit of a chauvinist, or he is truly jealous of all the time she spends with local politician (Nathaniel Parker), which makes him a paranoid fantasist.

One day at his local pool where Eric swims after work, he watches a motley group of men practice synchronise swimming and they exchange a few words. Numbers’ man Eric, suggests that the team is unbalanced and could use one extra man, never suspecting that the man would be him.

Jim Carter plays a diplomatic, gentle widower and, under his wing, Thomas Turgoose is Tom, a young parolee for which the activity is meant to be a constructive discipline. In contrast to Carter’s character we have Daniel Mays’ Colin a builder with anger-management issues which, we are asked to believe, stem from a failed career in football. Adeel Akhtar plays the cynical wise-guy Kurt and Rupert Graves is Luke, a divorced real estate salesman who flirts with Charlotte Riley character, a former female synchro star who, for some reason, hangs around the pool with a Swedish hunk who is Luke’s rival for the coach’s attention.

The group has a few house rules, like no talking about personal matters, although when Tom doesn’t show up for practice, he’s either on a crime spree or back in jail. The men, Eric learns have united to protest against ‘what we have become’ and the end of meaningless lives and dreams. It’s a big ask for synchronised swimming to lift them out of their rut, but when the coach signs them up to represent the UK in a new men’s synchronised swimming competition abroad, they have the goal of a life time

As Eric gradually integrates with the men we learn a little about their individual circumstances, but the characters are so superficially drawn that they feel cardboard, while Eric remains the focus. It’s hard to root for anyone, particularly the annoying Tom.

The men are not built like swimmers and are hardly attractive to watch in their bathing costumes as they struggle to appear coordinated let alone graceful and in a sport that is traditionally feminine. This gender reversal raises a few eyebrows and a couple of laughs but the premise, based on a 2010 documentary about a real-life team of middle-aged Swedish synchronised swimmers, needs a laugh-out-loud script and inspired direction to sustain itself. Unfortunately, Parker and scriptwriter Aschlin Ditta just tread water.

Instead of showing us how the men improve in the pool or including a few more scenes showing the home life of the men to remind us what is at stake for them, Parker wastes time with an embarrassingly stilted kids’ birthday party. Although it appears to be cold out, the children are celebrating around the pool when the men – and a singularly unfunny clown – provide the unlikely entertainment.

The filmmakers do find time to return to Eric’s personal life in a scene that suggests the jealousy over Heather’s situation was masking his moral qualms over his job. The timing however, implies that Eric’s newfound qualms about finding tax loopholes for the wealthy is somehow related to his new sense of self through swimming. This change would have been more convincing if it hadn’t come as such a surprise to the audience – as no doubt, it will be to his wife and dependents.

If the film appears to be a quintessentially British underdog, feel-good comedy, you may be surprised to learn about a French comedy called Le Grand Bain (translated as Sink or Swim). That film, with the same premise as Swimming with Men and a cast of top notch French comic actors screened out of competition at the Cannes Film Festival in May. It may even wash up on our shores one day, all the more water-logged for having followed this version of the Swedish real-life story.