Home / LIFESTYLE / REVIEWS > / FILM REVIEWS / This is not just mindless Christmas fun; it’s no fun at all 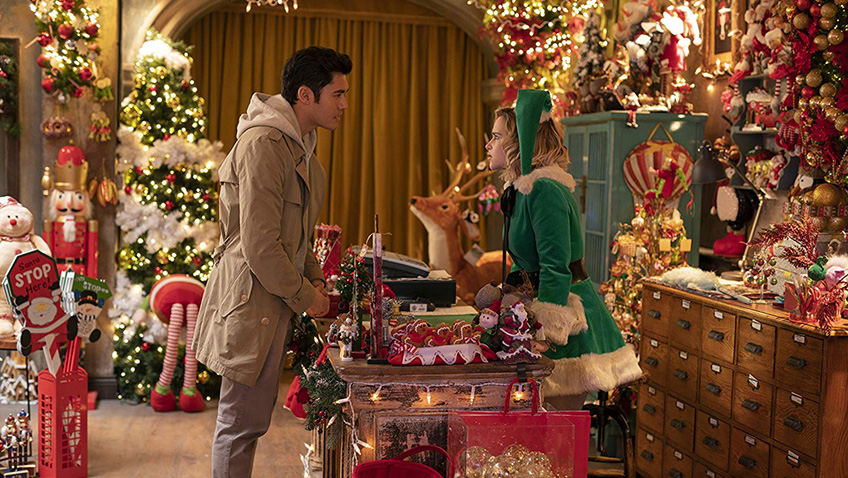 This is not just mindless Christmas fun; it’s no fun at all

No one has high expectations for a purpose-made Christmas movie. Still you might hope that with Henry Golding (Crazy Rich Asians, A Simple Favour), Emilia Clarke (Game of Thrones, Terminator Genisys), Michelle Yeoh (Crazy Rich Asians, Crouching Tiger, Hidden Dragon) and Emma Thompson (Late Night, Last Chance Harvey) in the cast, and Paul Feig (A Simple Favour, The Heat, Bridesmaids) directing from a script co-written by Emma Thompson, you can warm up in the cinema with an enjoyable romp to get you in the holiday spirit. No such luck. This is not just mindless fun; it is no fun at all.

For some reason, the film opens in the former Yugoslavia in 1999 with a girl of about 10, Katerina (Madison Ingoldsby) singing in a church choir to her adoring parents’ delight under her sister Marta’s (Lydia Leonard) resentful eye. Cut to London, 2017 and Katerina is now Kate, a sales assistant dressed as an elf in Santa’s (Yeoh) Christmas gift shop in Covent Garden, London. Not a trace of the accent or the angelic Yugoslavian choir girl remains.

We soon realise that we’ve met this woman before. She is the same self-destructive, single who manifests her comic self-loathing in selfish behaviour and an abject lifestyle that we’ve seen in How to be Single (Rebel Wilson), Trainwreck (Amy Schumer), and most recently, Brittany Runs a Marathon (Jillian Bell). She drinks too much, is obnoxious and accident prone, directionless, picks up losers in bars, alienates her friends, and has issues with her parents.

Clearly this is a woman who needs a saviour and, while it seems like retrograde plotting from Thompson, the saviour is a man. When Kate first meets the elusive Tom (Henry Golding) his cheerful attention annoys her. But once she gets to know him, he seems too good to be true.

The reason for Kate’s inability to lead a normal life is not really explained, although there are references to her heart condition and the trauma of escaping from the ethnic Yugoslav wars. But since we do not know what Kate was doing from her arrival in the UK (which must have been some 28 years earlier) until the present, it’s hard to tell.

The trauma does not seem to have affected her sister, Marta (Lydia Leonard) who has become a lawyer living in the kind of happy lesbian interracial relationship that has become a staple in modern family comic-drama. Kate’s beloved father (Boris Isakovic), who was a lawyer in Yugoslavia, is now a mini-cab driver who cannot stand to return home to his chatterbox wife (Thompson), but won’t divorce her either. 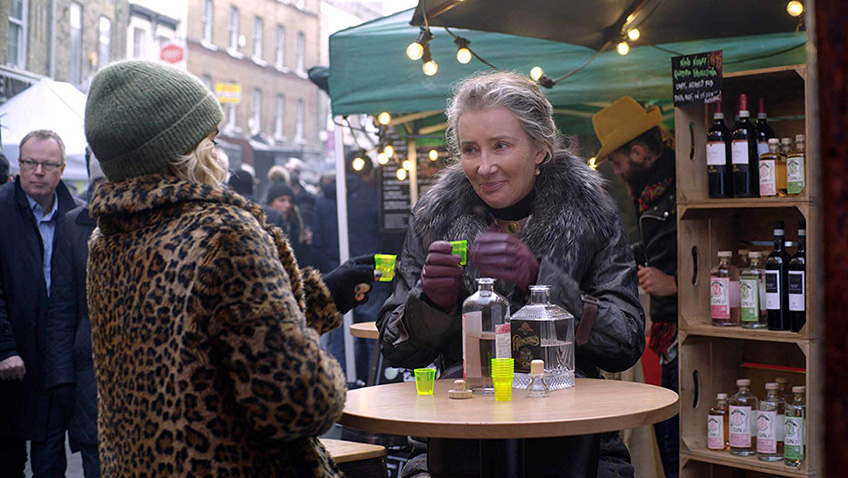 None of this has anything to do with the story (conceived by Thompson with her husband Greg Wise), but what passes for a story is just a series of episodic clichés. And the filmmakers make the mistake of believing that we find Kate so irresistible and vulnerable that we are rooting for her all the way.

Kate has never lost hope of making a living with her voice, and one day, when she is late for an audition, she rushes out of the shop, not just ‘forgetting’ to lock up but leaving the door open. Who does that? you might ask yourself, but don’t bother. Kate doesn’t lose her job because then we wouldn’t witness the pathetic spectacle of a talented actress like Michelle Yeoh falling for a mysterious man who sells sauerkraut and becomes catatonic over all things Christmas, including Santa herself.

Because Kate is homeless, she drags a suitcase with an I love George Michael sticker on it all around London. If the film’s title doesn’t give it away, we soon learn this sticker’s significance. While several of Michael’s songs are in the score, whenever possible, Kate sings just one: Last Christmas. By the end of the film you never want to hear the song again.

Kate’s new boyfriend is like no one she’s met before. He rides around on a bike with no helmet, claims he left his mobile phone in a cabinet so cannot exchange numbers, and takes Kate on cheap, romantic dates, like breaking into an ice-skating rink and running off with the skates when a security guard enters. He shows her shops signs that you miss if you don’t look up and takes her to his favourite hidden park with a significant bench. But for all this romance, there is no real romance. 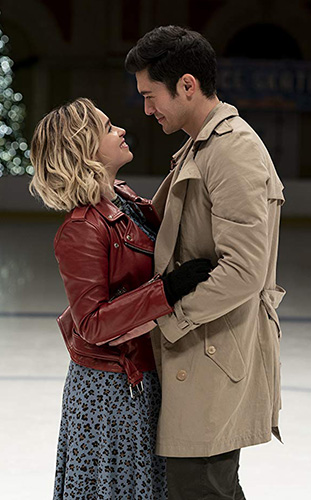 When Tom finally takes her home, it is to a compact studio that is so neat and clean it is like no one really lives there. Even here, however, there is nothing more intimate than a kiss goodnight, which is just as well as there is little chemistry between the two leads. The filmmakers make the mistake of believing that we will find Tom irresistible, but he is insipid and wears a sexy, superior look on his face like a mask.

Despite these limitations, rejuvenated by her self-help talks with Tom, suddenly Kate is a changed woman and spends the rest of the film attempting to make amends for the damaged relationships and damaged households in her recent past.

With the exception of Bridesmaids, Paul Feig’s films are not as funny as they should but he deserves credit for putting talented actresses in the lead roles (A Simple Favour, Spy) and often in roles that have gone, or would go to male actors (Ghostbusters, The Heat) as if to show women can do it just as well, or better.

You have to wonder what happened to those strong women here. You can ask the same question of Emma Thompson who seems determined to show Richard Curtis how whimsical hokum is really done. In an interview Thompson says of Michael, “He’d say, ‘well, you know, I’ve got my issues’ but… he was just a guy dealing with God knows what.”

So, Thompson has written a tribute movie about a woman who has issues and is dealing with God knows what. If every cliché in the book is used to tell it, it might be because this woman sounds like just about every character in every Christmas movie you can remember. Even the twist at the end is a déjà vu, but here there are holes when you try to make sense of it. You might find yourself hoping that the mysterious mobile phone will tie the story together, but you hope in vain. Last Christmas

wants so much to be about everything that it ends up being about nothing.