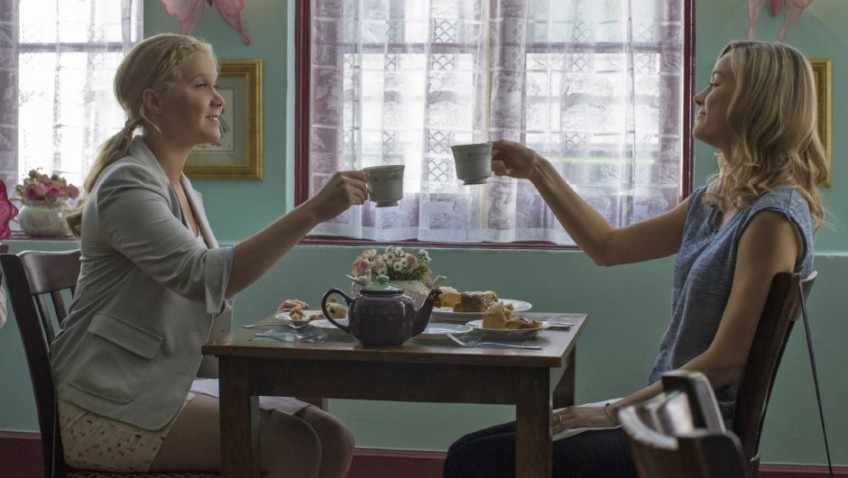 Apatow has found his perfect match in the hilarious Amy Schumer

is the new romantic comedy from Judd Apatow’ needs to be qualified. First, because “romantic” is hardly the first word that one associates with Judd Apatow (This is 40, The 40-Year-Old Virgin, Knocked Up) and second because the film’s script was written by Trainwreck

Schumer and Apatow are a match made in heaven if you like your comedy rude, crude and occasionally hilarious, although the ‘romantic’ happy ending seems to have been Apatow’s intervention. What is definitely Schumer’s idea, however, is the prominent role of her character’s – also called Amy – played by Colin Quinn. In real life Gordon Schumer has multiple sclerosis which is also the case with Quinn’s character, also named Gordon.

Schumer, 34, is a cross between Bridgette Jones and Joan Rivers. As a thirty-something career woman working for men’s magazine S’nuff, Amy Townsend (Schumer) is a party animal who uses crude language, drinks, gets high and sleeps around, much to the disgust of her dumb, body-builder boyfriend.

Her conduct is explained, or so we are asked to believe, by an epilogue that opens the film twenty-three years earlier. Going through a divorce, Gordon Townsend (Quinn) tells his two daughters, Amy and Kim, that monogamy isn’t realistic, words that they repeat like a mantra. Adult Kim (Brie Larson) is happily married with a stepson, but Amy has taken her father’s words to heart.

When an article on sports doctors is pitched at an editorial meeting at work, an outspoken Amy comments that ‘sports are stupid’. Diana (Tilda Swinton) Amy’s demanding and unpredictable boss, decides that Amy would be the perfect person to do the article, and sends her to interview celebrity sports doctor Aaron Conners (Bill Hader).

Aaron finds it amusing that Amy fails miserably to hide her ignorance of sports, and after a tour of the facility, lunch and dinner, they return to Aaron apartment. Amy is panic stricken when she spends the night, breaking one of her rules and the following day, Amy and her colleague Nikki (Vanessa Bayer) decide Amy should break off the relationship. Aaron, who hasn’t dated anyone for five years and likes Amy, is having none of it. The relationship seems sealed when Amy gets a call that her father, whom Amy and Kim have put in a care home, has had a fall. Amy watches Aaron’s bedside manner as he patches up her father’s wound and chats with him about sports. Gordon is a Mets fan and Amy is furious with Kim for getting rid of his Mets memorabilia when she cleared out his house.

The remainder of the film chronicles the ups and downs of the relationship, complete with Amy’s panic attacks and attempts to derail a relationship that she really wants to succeed.   With a running time of just over 2 hours, there are a few too many ups and downs, and while there the laughs continue to the end, there are some dry spells.

Bill Hader (Superbad, You, Me and Dupree, Fear in Inside Out) is a refreshing romantic lead and there’s real chemistry between he and Schumer. There are, however, some credibility gaps in his character. We are told that in addition to being the personal physician of NBA star LeBron James and others, he volunteers with Médecins sans Frontières (Doctors without Borders). For such a busy doctor, Aaron seems to have loads of time on his hands, and we never hear a word about him flying off to Africa for his charity work. That said, Amy’s complex relationship with her father is thoroughly credible, and we see in Gordon the vulnerability, humour, cynicism and contradictions that have become a part of Amy.

Unfortunately, a silly ending contradicts everything that we have been watching for nearly 2 hours. While it would be a spoiler to say more there, is something disturbingly sexist to it. Then again, Trainwreck

, while entertaining, is not as ground-breaking as it would have us believe. Trainwreck

takes a sinuous track, but eventually leads to the same depot of countless romcoms.  What every woman really wants is to settle down with the right man (hopefully a sensitive, rich doctor) and raise a family.