Home / LIFESTYLE / REVIEWS > / FILM REVIEWS / Playing mother and daughter Goldie Hawn and Amy Schumer are worth seeing, but the film is not 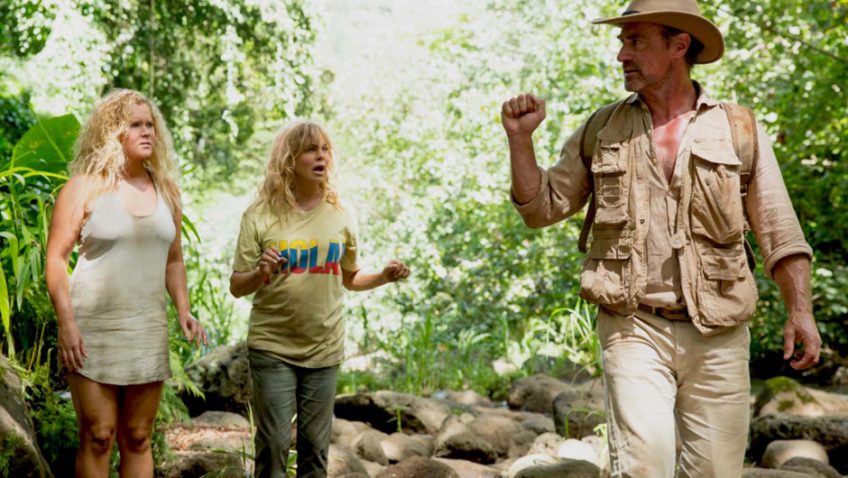 Playing mother and daughter Goldie Hawn and Amy Schumer are worth seeing, but the film is not

Back in 1991, with Ridley Scott’s influential, hit movie Thelma & Louise, Hollywood became wise to the potential of two strong female characters (albeit supported by a young man looking like Brad Pitt) carrying a film. The idea of a female-led blockbuster was given another boost by Bridesmaids in 2011 while the all female Ghostbusters in 2016 was an obvious, but sadly, inadequate, attempt to pitch the gals against the guys. Similarly, in response to the male buddy movie, we’ve seen female-buddy movies like The Heat, The Boss and, in a variation on the genre, Grandma in which a savvy grandmother goes on a road trip to raise money for her granddaughter’s abortion.

In Tammy (2014) superstar Melissa McCarthy (Bridesmaids) plays a dysfunctional single woman who goes on a road trip with her grandmother (Susan Sarandon) during which both bond, help one another and become better people. Okay, it was a bit odd since, apart from looking nothing alike, McCarthy was 44 and Sarandon, 68, could have been the youngest grand-mother in the Guinness Book of Records.

, no such mistakes are made. The glorious Goldie Hawn, 71, is Linda Middleton, the single (her husband left her), stay-at-home, conservative suburban mother to stand-up comedienne-turned-actress and now producer Amy Schumer, 35. The two are both blonds, are almost the exact same height and are just about the right age for this high concept comedy in which a desperate daughter invites her mother on a pre-paid holiday to Ecuador.

When the film opens Emily Middleton (Schumer) is in a boutique shopping for her upcoming holiday – or so it seems. Quickly we realise that she is supposed to be working in the shop: selling and helping others. Her boss realises it too, and sacks her, ignoring Emily’s audacious plea to keep her on until her unannounced holiday leave. Emily consoles herself at lunch with her boyfriend Michael (Randall Park), for whom she has purchased the non-refundable tickets to Ecuador. The trouble is, Michael, now a successful musician and besieged by women, is moving on and has no time for or interest in a holiday with Emily.

After a funny scene in which Emily is rejected by text by everyone on her contact list, she pays her mother a visit. Still living at home as a dependen is Emily’s agoraphobic piano-teacher brother (Ike Barinholtz). Linda’s idea of excitement is making clay cats in her pottery class and she turns down the offer. After looking through an old photo album and realising how cool and adventurous her mother was, Emily successfully pleads with Linda to ‘help me put the FUN in non-refundable.’ Up until this point the film has given us a few laughs and offers the potential for a lot more with Hawn’s involvement. But once the mother-daughter team arrive in Ecuador and the plot (announced by a caption at the beginning) kicks in, Kate Dippod’s script offers more misfires than solid laughs. Dippod is a curious choice for Schumer as she is the uneven writer of choice for that other popular, oversized, brash, shameless American comedienne, Melissa Mcarthy, having written The Heat, and Ghostbusters.

Within 12 hours of their arrival, Emily is picked up by a handsome, polite American hustler, James (Tom Bateman) who invites her out to sample the local night life. This should have sent alarm bells ringing, but by now we know that Emily is prone to misjudging men. The audience will quickly work out that James is the front man in a kidnapping for ransom racket run by Colombian outlaw Morgado (Oscar Jaenada).

In addition to the disappointing gags and jokes, we have the prescriptive bonding between mother and daughter, as each impresses the other with her resourcefulness and will to live. But the film is over burdened by too many unnecessary characters that add little to the plot and even less to the comedy.

The brother, Jeffrey, missing his mother, gets in touch with Morgan, a useless CIA agent in Colombia (Bashir Salahuddin) and their conversations, which are supposed to be funny are embarrassingly tasteless and flat. At the luxury hotel in Ecuador, Linda and Emily had met Ruth (Wanda Sykes), a paranoid tourist who warns them about the dangers of the country and her friend Barb (Joan Cusack) a former Special Ops agent who cut out her own tongue so she could not be tortured into giving up information. This leaves Emily wondering why Barb took this precaution when she could always be forced to write down the information.

The interventions of Jeffrey/ Morgan and Ruth/Barb are not only tedious, but distract us from what should be the central relationship in the film. In addition to knowing how to execute physical gags, Schumer’s talent lies in her risk taking, uninhibited nature and off-the-cuff delivery of lines that, uttered by most comediennes, might not be funny. In a tightly plotted film there is less time for her comic potential to develop, while Hawn is hampered by her role as the ‘straight man’ and her character’s predictable opening up.

Since the plot is hackneyed and silly, it’s clearly all about the two leads and the comedy. Schumer and Hawn are such a strong comic duo that they keep us watching, but Jonathan Levine’s (The Night Before) film is more an exercise in self-indulgence than the hilarious master class it needs to be.