Home / LIFESTYLE / REVIEWS > / FILM REVIEWS / Don’t call these Ghostbusters, even if they do come with Chris Hemsworth as eye candy 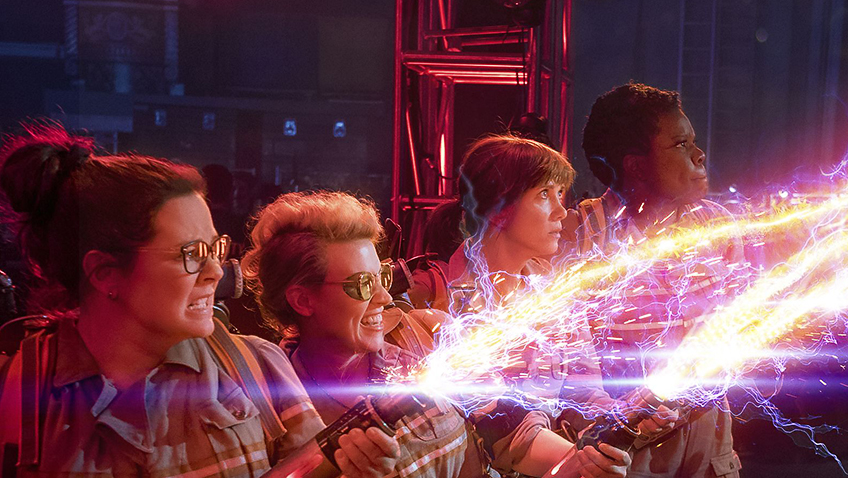 Don’t call these Ghostbusters, even if they do come with Chris Hemsworth as eye candy

Paul Feig, who directed Bridesmaids and Spy, and co-wrote and directed The Heat, is fast becoming the champion of female comedienne actresses. In Spy and The Heat, he put women into jobs that are typically men’s, requiring brains and brawn in equal measure. In this respect, an all female remake of the 1984 classic, Ghostbusters fits nicely on Feig’s CV, particularly as advances in CGI, coupled with 3D, ensure that these ghosts are a lot scarier than those back in 1984.

Feig has assembled a dream cast in an attempt to match the paranormal triumvirate of Dan Aykroyd, Harold Ramis and Bill Murray, but then does not use their talents or do much with the fact that they are women. Instead of a sequel with fresh ideas, we get the original (minus the cinematography by László Kovács and the music by Elmer Bernstein) complete with cameos from nearly every actor from the 1984 film to remind us of the iconic movie we are hard pressed to forget.

is front loaded with laughs, though the humour, even in the first half, is not as consistent as you’d like it to be. Physic professor Erin Gilbert (Kristen Wiig, trying her best to imitate the dead-pan Bill Murray’s Peter Venkman) finds that her long-awaited tenure at Columbia University is dead in the water when her past comes back to haunt her, pun and all. Unbeknown to Erin a very aggressive, projectile-vomiting ghost has wrecked havoc at a local tourist attraction and left the tour guide (Zach Woods) literally hanging on by an inch of his life. Naturally, a paranormal specialist is sought.

Although Erin would prefer not to remember, years before she authored an all-to-serious book about ghosts with her best friend and colleague Abby Yates (Melissa McCarthy, doing her usual thing), but thought that the only two copies published had long since disappeared. Dean Harold Filmore (Charles Dance) has the school’s reputation to maintain and Erin’s reputation crumbles in ridicule. Furious that the book is widely available, Erin tracks down Abby, now working in a new partnership with nuclear engineer Jillian Holtzmann (Kate McKinnon). By the end of a chilly meeting Erin is convinced once again that ghosts might be targeting Manhattan. 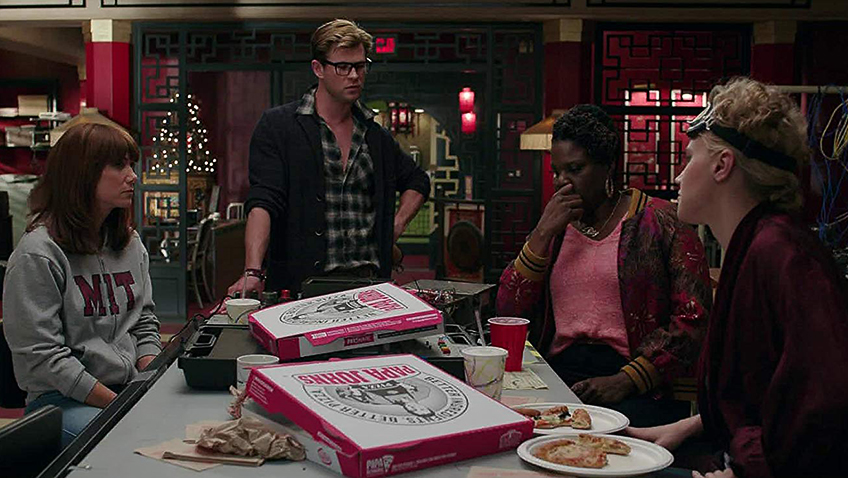 Simultaneously, New York City transport worker Patty Tolan (Leslie Jones) is coming round to that persuasion. She follows a weirdo who passes by her booth in the subway only to find he has disappeared in the tunnel. There she is petrified by an encounter with a huge, scary ghost. Here, it’s worth noting that the CGI ghosts are towering liquidy apparitions, substantial enough to look like monsters (they seem made of green bile), yet also amorphous. They could scare little children (the film is 12 rated), but only the first ghost, that of the daughter in the historic house with a tale to tell, is really frightening to adults.

In one of the funniest scenes in the film, the three women are interviewing candidates for their secretarial position. The sexism of the original is spot on, albeit with a new, male target. Acting simultaneously against type and to type, heart-throb Chris Hemsworth plays job applicant Kevin Beckman, a mentally challenged hunk who is too dim to realise that his function is to serve as eye candy for the three single women. Who cares about typing with those biceps? When asked about the absence of glass in his glasses, Kevin replies matter-of-factly that the lenses kept getting dirty, so he took them out. Besotted, Erin sways the vote and Kevin is hired on the spot. 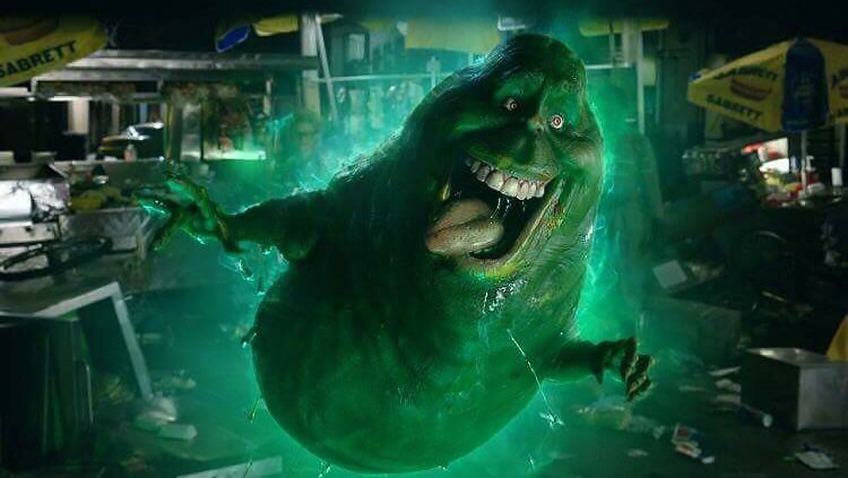 When Kevin is finally persuaded to answer the phone, it takes some doing for him to extract the message or caller. Kevin also has difficulty pronouncing the real name of the new firm and answers, ‘Ghostbusters’. The name sticks. The search for a logo ends when a mystery man sprays it on the subway wall, Banksy style.

Having survived the ghost attack in the subway, subway worker Patty rushes to the new offices of Erin, Abby and Jillian. The ghost busters accompany Patty to the underground location and witness a ghost that they are unlikely to forget.

Although her motivation for leaving a job with a good salary and solid pension is never explained, Patty quits the subway job and talks her way into a ghost hunting. She clinches the job by mentioning her father’s access to motor vehicles, a necessity in their line of work. Voilà the hearse, because what Patty did not mention was that her father was in the funeral business. 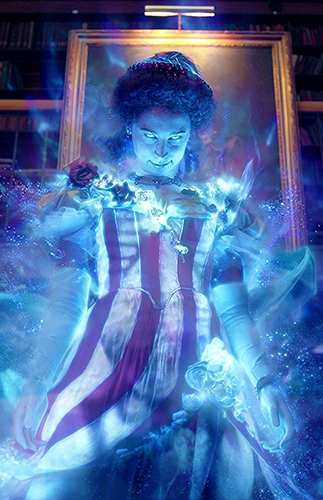 The plot thickens, though does not become more interesting, with the re-introduction of the creepy man Patty chased into the underground tunnel, Rowan North (Neil Casey). Rowan is the film’s one-dimensional evil villain who, like a character in a Marvel Comic, can assume many forms. He can take over a person, turning first Abby and then Kevin into demons that turn on their colleagues.

Another conflict emerges in the very real form of NYC Mayor Bradley (Andy Garcia) and his right hand woman, Jennifer Lynch (Cecily Strong). Lynch’s big PR job is to encourage the Ghostbusters in their work, while discrediting them publicly in order to avoid a city-wide panic.

It is now de rigueur in comedies, particularly in sequels, to compete for the largest number of cameos squeezed into one film. Ghostbusters

might not top Zoolander 2 or Absolutely Fabulous, but Feig has a go: Bill Murray plays Martin Heiss, a famous ghost debunker; Dan Aykroyd plays a NYC cabbie and Annie Potts shows up as a Hotel Desk Clerk. Ozzy Osbourne, Al Roker and Pat Kiernan play themselves. Ramis died in 2014 and, thankfully, has not been resurrected in a digital mask.

The second half of the film is dominated by a repetitive battle with Rowan’s creatures that are now determined to take over Manhattan. The Ghostbusters, who, in their protective suits could be men, use an array of deadly weapons that Jillian produces in the manner of James Bond’s Q. There are also more perplexing oddities like a huge winged dragon attacking a heavy metal concert. At that point you almost expect Tony Stark’s Ironman to join forces with the girls. If more time and imagination had been devoted to the new team than to the old, this film might have been a better legacy.