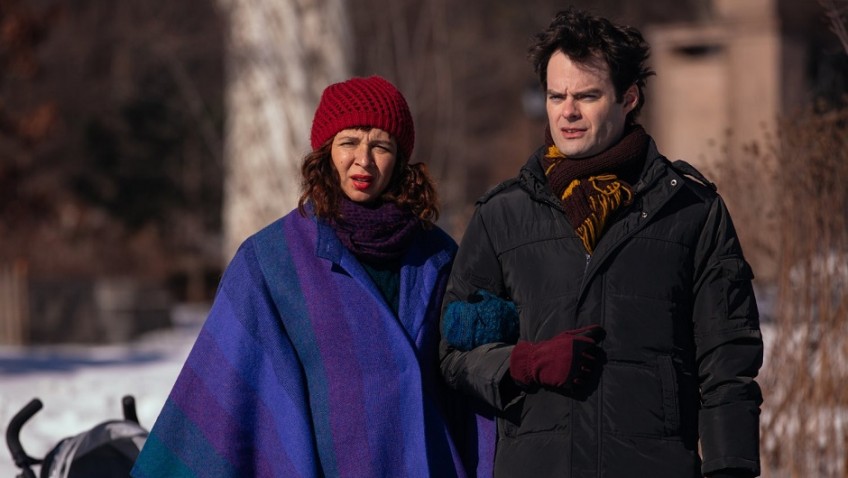 Rebecca Miller, daughter of Author Miller and wife of Daniel Day Lewis, has written and directed four feature films (Angela, Personal Velocity, The Legend of Jack and Rose and the Private Lives of Pippa Lee), with barely a laugh amongst them.   Now, age 53, Miller has begun to find humour in her wounded characters and their hectic modern lives.  With Maggie’s Plan she has entered the highly competitive field of the New York City relationship comedy opening herself up to comparisons with some of the most talented writer/directors around: Woody Allen, Noah Baumbach, David O Russell, Nicole Holofcener and even Sebastian Silva.  While Maggie’s Plan is a delightfully entertaining romcom, with some solid insights into relationships and the world of academia, this is tough company to keep.

Miller does not make life easy for herself. Choosing the increasingly popular Greta Gerwig as the eponymous planner is bound to create a feeling of déjà vu. But putting the overly used theme of artificial insemination at the core of the plot puts us squarely in familiar territory. Romantic comedies like the Back Up Plan, the Switch, Delivery Man, The Kids are All Right and How to Be Single, all deal with the topic of artificial insemination.  In Chilean auteur Silva’s most recent black comedy, Nasty Baby, comedienne Kristen Wiig plays a self-sufficient Brooklyn professional who wants a baby, choosing a gay man as the sperm donor as though to underscore that marriage is not her primary motive.

It’s not that Maggie, an energetic, arts’ outreach consultant at New York’s New School , does not want a man; it’s that she is certain she will never find one who will want to stay with her for more than six months, and vice versa. So she chooses an old class mate. Guy Childers (Travis Fimmel) is, on the surface a handsome, but introverted underachiever: a brilliant mathematician turned artisan pickle maker.   Maggie might not realise, and certainly does not seem to care that Guy is madly in love with her.  She cuts him off when he starts to answer her question about parental involvement in the wrong way.  Maggie wants a hands-off father and he is hoping that somehow his generous gesture will bring them closer.

As Maggie is negotiating with Guy, who tells her that Whole Foods is interested in placing a large order for his pickles, a chance meeting introduces her to the handsome, ultra-cool, boyishly romantic John Harding (Ethan Hawke).  John is a ‘ficto-critical anthropologist’ at the New School (Maggie, enchanted, tells him that she has never met an anthropologist).  He is married to Georgette Norgaard (Julianne Moore), Tiger mother to their two children and a world renown academic ten years his senior who has no time to feign interest in the novel John is trying to write.

If John is feeling like a third child, struggling to compete with a woman who does not really need him, control-freak Maggie is instantly attracted to a man who, like a plant, needs some nurturing to realise his potential and blossom into the successful author she already loves.   When she offers to read his manuscript, John is flattered, and when her feedback is positive, he believes he has found a soul mate.

Just as Maggie is injecting herself with Guy’s sperm, a desperate John rings the door bell.  His wife has thrown him out and he declares his love for Maggie.  In a fit of passion, they make love.

The story is picked up two years later.  Maggie and John are married and live in a trendy converted warehouse just off the East River with their adorable two-year-old adorable daughter Lily.  But married life is proving hectic, even for multi-tasking Maggie. She finds herself caring not for one child, but four, as John, now a full time writer, passes his chores and parenting responsibilities onto Maggie, who is still working at the New School.  More irksome still are his conversations with his ex-wife that continue far longer than need be to confirm week-end child care arrangements. At the same time that Maggie is falling out of love with John, she meets Georgette at a book launch, and they establish an unexpected rapport.  Far from the dragon-lady Maggie feared, she detects that Georgette is still in love with John.  It dawns on her that John actually thrives on Georgette’s self-absorption and their academic rivalry.

Feeling responsible for the break-up of one marriage Maggie devices a plan to absolve herself of the guilt of breaking-up a second: her own.   What Maggie fails to realise is that you tamper with destiny, and the human heart, at your peril.

There are enough funny lines situations in the film to make this a refreshing comedy.  Gerwig is the woman to call if you want a mix of goofy intelligence, kindness and dangerous innocence, but here Gerwig seems to be slightly overplaying to type.  The great Julianne Moore is not as funny as Miller might have hoped with her Danish accent in this send-up of  NYC academia; and the essential chemistry between Hawke and Moore is lacking.   But Hawke’s performance, so great in Richard Linklater’s Boyhood, and his ‘Before’ trilogy (Midnight, Sunset, Sunrise, is worth the price of admission alone.  Alternately charming, immature and self-obsessed, loving, insecure and mixed-up, he nails the film’s complex pivotal character and makes him not only completely credible, but hilarious.

The best New York comedies, like Holofcener’s ‘Please Give’, appeal to audiences who have never even been to NYC, by exposing the characters’ foibles and strengths so that everyone can see a bit of themselves in them.   Unfortunately, the punch line, which some viewers will ‘get’ from the big club at the half way point, and others will miss, is end-loaded, so that in the final two minutes we get the rush of information about little Lily that should have been dripped to us throughout the film.