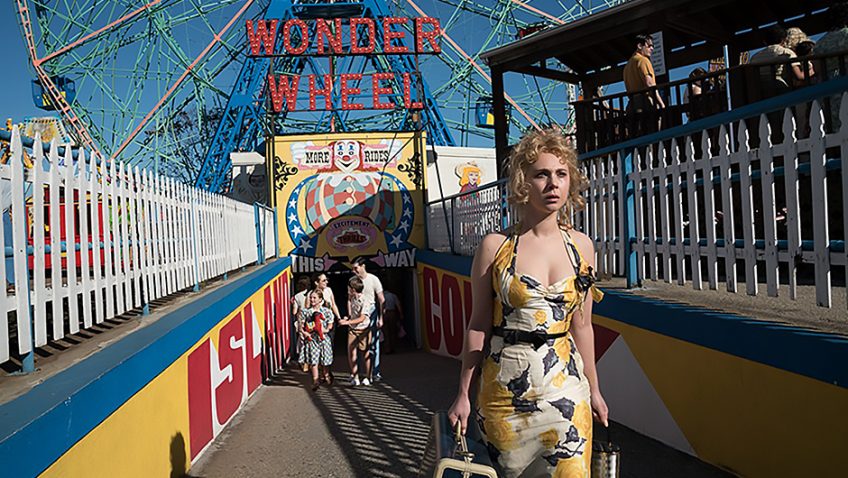 Of the three prolific octogenarian American directors still working today, Woody Allen, at 82, is the youngest and the most prolific. He has given us a film every year, but two, since 1966 and in some years, two films. While the quantity is consistent, the quality is not and Allen has not made a memorable film since Blue Jasmine was nominated for several Academy Awards in 2013. Wonder Wheel

, Allen’s first film shot in New York in a decade is saturated with echoes of Bullets Over Broadway, Broadway Danny Rose, Manhattan – and yes, even Blue Jasmine, but gets bogged down by the pastiche and some lazy writing. Still, it is entertaining enough with the glorious cinematography of three-time Academy Award winner Vittorio Storaro, 77, an atmospheric recreation of Coney Island, and Kate Winslet as a Coney Island waitress who has made a mess of her life – and everybody else’s.

to one of Allen’s better films is the use of the creator/narrator who breaks the fourth wall and sets the scene – a slightly seedy Coney Island in the early 1950s. He also introduces himself: the Beach lifeguard Mickey Rubin (Justin Timberlake), a sea-loving, aspiring playwright who has travelled; has a degree in European Literature from NYU, and a penchant for melodrama. He sounds a bit like Eugene ‘O’Neil, except that O’Neil dropped out of Princeton.

It seems that Mickey is creating the story that we are watching and of which he is not only the omnipotent narrator, but the leading man. He thinks theatrically, which might explain the theatrical feel to the production design. The problem is that Mickey is an amateur and the Allen, the far more talented director appears to be far too indulgent to his latest in a long line of narrators.

And so Mickey tells us that he is a romantic, which might explain why he begins an affair with the desperately unhappy, vulnerable Ginny Rannell (Winslet), a married, beach-front restaurant waitress. And then, later in the summer, he declares his love for the strawberry blond bombshell, Carolina (Juno Temple), Ginny’s step daughter who is on the run from the mob.

Carolina, mid-twenties, shows up in the teeming beach resort on a hot summer day wearing a low-cut, bright, flowery summer dress that is not exactly low profile for one in hiding. But she is confident the mob would not come looking for her at her father’s apartment as it is well known that he disowned her when she abandoned plans for university and eloped at 20 to marry a gangster. As we see, she is mistaken.

It doesn’t take long before recovering alcoholic Humpty (Jim Belushi), the amusement park’s carrousel operator, Carolina’s father and Ginny’s second husband forgives his daughter. While Carolina gets a job as a waitress in Ginny’s restaurant, Humpty starts saving to send her to night school to become an English teacher. So we realise that Carolina and the literary life-guard have a lot in common. 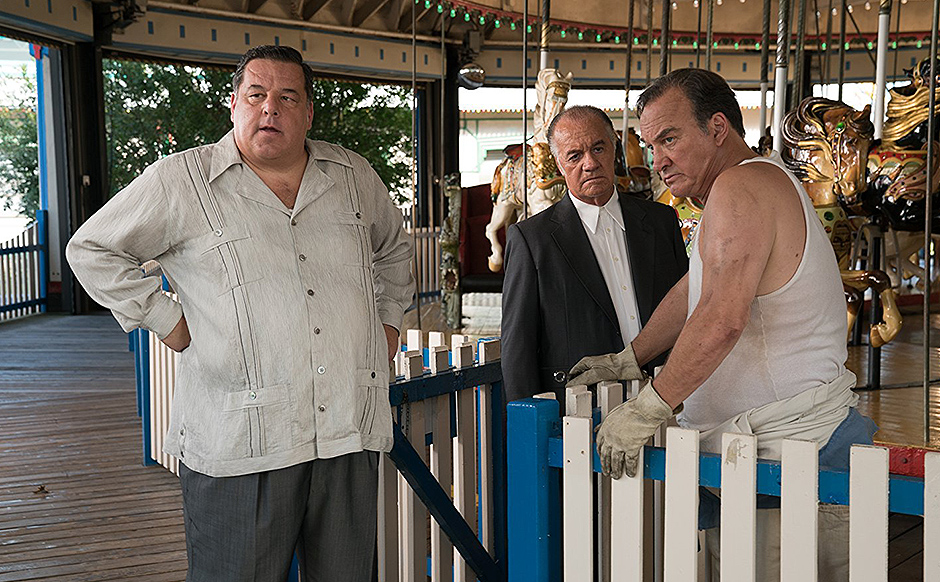 But though Ginny has nothing in common with Humpty, whose idea of a great time is to take her fishing with him or to a baseball game (she hates baseball) and is bored with her marriage, she acknowledges she owes Humpty a debt. Both met five years earlier in a bar at rock bottom, and helped each other on the wagon. He gave her a home and asked her to marry him. Though Humpty hit her once or twice when drunk, he is sober now and is a decent, if coarse, hard-working man.

Like Humpty, Ginny has a child from a previous marriage: a ten-year son named Richie who is a movie-loving, school-skipping pyromaniac. Ginny, who hates the smelly fish restaurant, resents Humpty’s insistence that his daughter will not spend her life as a waitress when his wife is, and she resents him saving money for Carolina’s education when Richie has just set fire to his psychiatrist’s office.

Ginny tells Richie (he’s heard it all before) about her life as a fringe actress in her glorious youth while trying on costumes and fake jewellery like Blanche Dubois. But when Ginny tells a curious Richie that his father left them, she is not being entirely truthful. The musician she claims to have loved so much only left when he discovered Ginny was having an affair with a handsome stranger. 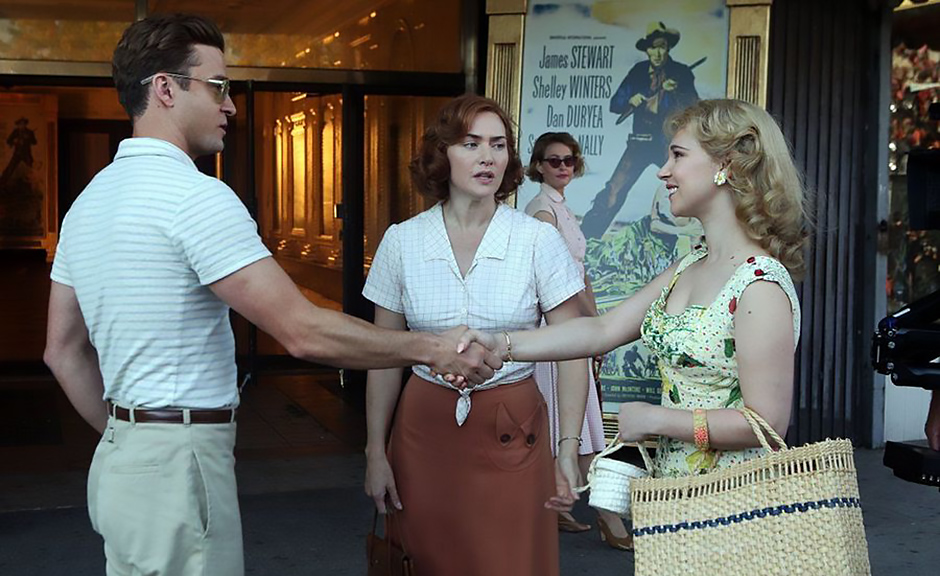 And this brings us full circle to our drama-loving lifeguard who favours the American family melodramas of Tennessee Williams and Eugene O’Neil. Blue Jasmine was, of course, an adaptation of Williams’’ A Streetcar Named Desire’ and the mother of all American theatrical love triangles might be O’Neil’s Desire Under the Elms, itself based on a Greek tragedy.

opens a bit like Blue Jasmine: a woman who has been married to a crook seeks refuge at a poor relative’s house and Winslet’s Ginny owes a lot to Jasmine. Hypersensitive, Ginny has headaches from nerves and loud noises. She finds her job degrading; looks down on her unsophisticated blue collar husband; believes she was meant for better things and panics when she sees that the man who is her one chance to escape is eluding her. And, like Jasmine, she has a vengeful streak that few would suspect.

But it’s Mickey who is the real trouble maker. He needs to complete his tragic, melodramatic love triangle and, as well as his kiss-and-tell confession to Carolina, he’s bringing in plot elements from the archives. Fans will recognise echoes from Bullets Over Broadway (the character of David Shayne, an aspiring playwright who gets involved with a gangster’s in a fraught love triangle) and Broadway Danny Rose (a married talent agent, gets into a love triangle with a former gangster’s girlfriend).

This, and of course, musician Woody Allen’s period music getting us in the mood, is all rather clever if you get past the artifice. Winslet, Juno Temple and the gorgeous background of 1950’s Coney Island combine to make the time fly by enjoyably enough, but Winslet was more tragically convincing in Labor Day another flawed American film starring this great British actress.