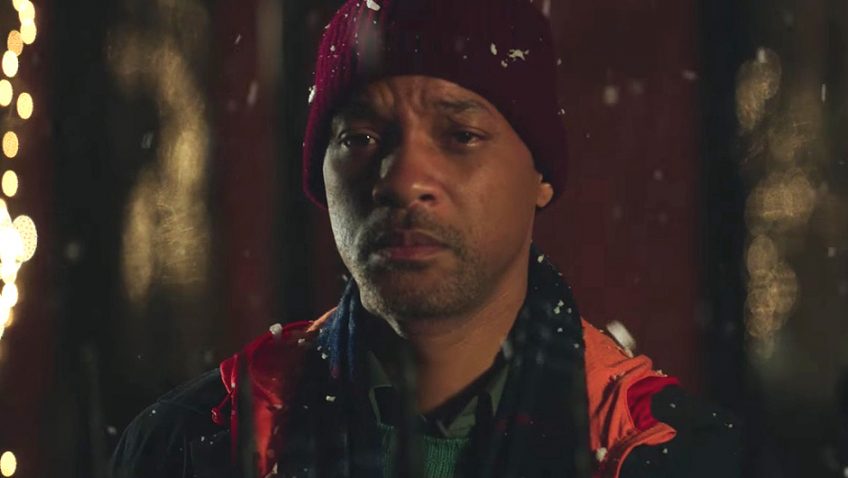 Will Smith has demonstrated his star power in film after film, from Men in Black, to Ali to I am Legend, and he has been nominated for two Academy Awards, including a generous nod for the Pursuit of Happyness.   But as actor and producer he’s been behind some failures too, including After Earth, and last year’s Concussion. Smith’s wife, the actress Jada Pinkett Smith, called for a boycott of the Academy Awards for its lack of black nominations last year. As if to prove her point, Smith seems to be going for broke with a tear-jerking Christmas movie that might make some audiences cry.  For others, what is most likely to bring on the tears is the waste of a superb cast in this maudlin, sentimental homage to the Capitalist Spirit.

Smith plays Howard Inlet, a big-shot advertising executive who suffers a breakdown and withdraws from corporate life following the death of his six-year-old daughter.  With Howard inoperative, the company will sink.  His three partners and, we are led to believe, loving friends, Whit (Edward Norton), Simon (Michael Peña) and Claire (Kate Winslet) have a golden opportunity to sell the company at its peak and secure their, and Howard’s future.   Unfortunately, Howard is having none of it.

Interestingly, the point of view of Collateral Beauty

is not Howard’s – it cannot be. For desperate, the triumvirate of advertising executives concoct a plan to force Howard out by making him look more certifiably insane than depressed.   They don’t have to try hard. As the film opens we hear Howard giving a motivational speech to the whole company that ends with: ‘We’re not here to sell shit; we’re here to communicate…Love, Time, Death: These three abstractions connect everyone!’

Even for a fantasy movie, it asks a lot of the audience to suspend disbelief when the triumvirate offer a pile of cash to a struggling theatre company to personify Howard’s three abstractions. They discover that Howard has been writing letters to Love, Time and Death and conspire with the theatre group to provide him with answers.    The idea is that the personified abstractions will only be visible only to Howard who will look like he’s talking to himself.  This will be videotaped for the board meeting. You can’t make it up, but scriptwriter Allan Loeb (who wrote the melodramatic Things We Lost in the Fire and the dire So Undercover) apparently did.

The theatre’s British director and manager, Brigitte (Helen Mirren), being by far the oldest, plays Death.  Young Raffi (David Lattimore) plays Time and young British actress Aimee (which means loved in French) portrays Love.  Aimee is played by Keira Knightley who finally has a good reason to pout.  So does Edward Norton whose considerable talent does not extend to pretending he is in love with Aimee. Will Smith and Keira Knightley in Collateral Beauty

There is some morality in play here.  Aimee and Claire do not like this stomach- turning plot to deceive Howard any more than we do, but they reluctantly go along.  Everyone in the theatre troop wants the money and the triumvirate want the deal to go ahead that would secure their future.  This is Madison Avenue, after all.   In fairness to Simon, Simon has a good reason for wanting to store up a lot of money for his family.  And David Frankel has an excuse for another mawkish scene when Brigitte, who is more than what she seems, gives Simon some motherly advice. And lo and behold the theatre troop really does Howard some good.  So does Brigitte, doubling as a Ms Marple lookalike in the hospital waiting room where she tells Howard to look out for the collateral beauty in his daughter’s death. The opposite of collateral damage, this is the residual beauty that comes out of horrible tragedy.

And this is where one must introduce Madeleine (Naomie Harris) into the equation, the leader of a self-help group for grieving parents who have lost young children.   Howard is a reluctant member of this group, and he and Madeleine have more of a bond than you might suspect.   To write more would be a spoiler, but frankly, this part of the plot is so shamelessly contrived that you might refuse to believe what you are seeing.   This pumped up sentimentality is a shame, because there are scenes where Smith makes Howard’s grief palpable.  This is no mean feat as the tragedy occurs before the main action, making us more than one step removed from the pain Howard is feeling.

David Frankel is rather a mystery.  His films range from broad, popular comedy, such as The Devil Wears Prada to the curious unclassifiable The Big Year, to the unwatchable romcom Hope Springs, and to the predictable and sentimental, but amiable, One Chance.  Yet despite this he can attract the likes of Smith and Norton and two of Britain’s finest actresses, Kate Winslet and Helen Mirren.   Just what they, and Keira Knightley, are doing in Manhattan is anybody’s guess, but their presence in this Christmas turkey is in vain.  Nobody looks good.