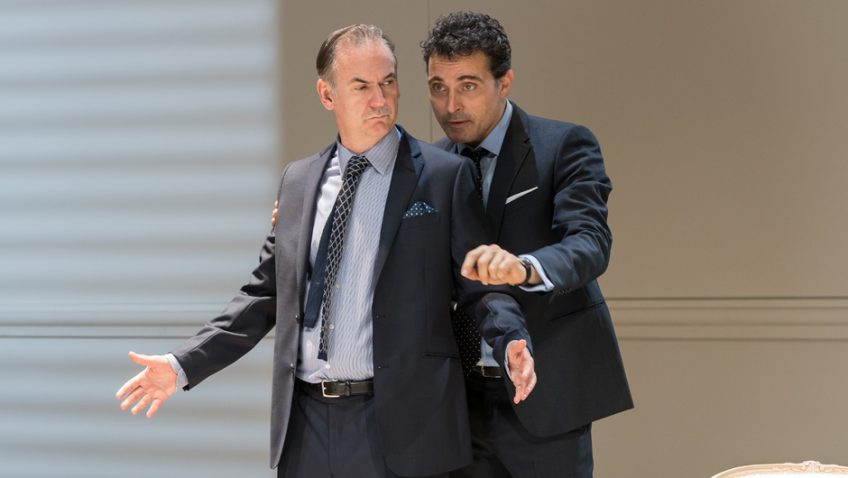 Twenty years ago Matthew Warchus directed Albert Finney, Tom Courtenay and Ken Stott in Yasmina Reza’s Art in the West End. It was huge success, going through many casts, some better than others.

Warchus now directs Rufus Sewell, Paul Ritter and Tim Key. The revival confirms what I thought in 1996. Art is a modern French classic. The translation is by Christopher Hampton. Mark Thompson’s minimal setting which, with its high bare walls, looks like an empty gallery waiting for paintings to be hung.

Art is not, as some people have presumed, a satire on modern art but a comment on friendship, its constrictions, its traumas and its tantrums.

The painting is a white rectangle with barely visible white lines across it. Serge has paid 100,000 Euros for it.

Marc roars with laughter and says he thinks the painting is a load of rubbish and that Serge has been ripped off. Serge finds Marc’s aggressive condescension and total insensitivity deeply offensive, a judgement on his taste as much as on the painting itself.

Their friend, Yvan (Tim Key), intervenes, attempting the role of arbitrator and peacemaker. He gets no thanks for his pains. They turn on him viciously. Yvan is an obsequious punch-bag and soon burst into tears.

The conflict gets really nasty. The remarks, obnoxiously calculating in their patronising rudeness, become more and more personal.

A fifteen-year friendship disintegrates before our eyes. It is obvious now (as it was not when the play was first staged twenty years ago) that Marc was once in love with Serge.

There is a terrible moment when Serge offers Marc his felt tip pen and challenges him to destroy the painting. What was really shocking in 1996 was that there were so many members of the audience who actually found the idea of Marc destroying the painting hilarious.

I regret to say the Philistines are still with us. There was laughter and somebody actually clapped their approval.

I will leave you with an aphorism from the play because it is what the play is all about:

Warchus’s production has class. The acting’s good. Art is the wittiest play in town. Don’t miss it.