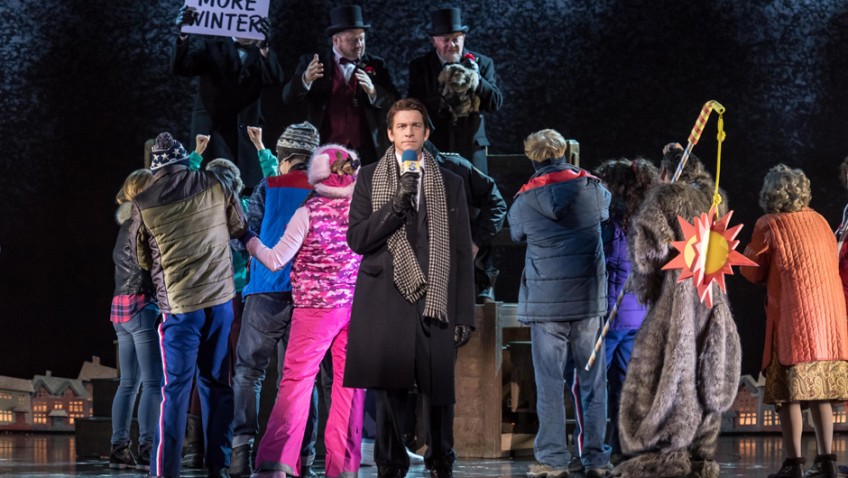 Déjà vu? Life has a funny way of repeating itself in “Groundhog Day”

The 1993 Harold Ramis movie, Groundhog Day, with a script by Danny Rubin and starring Bill Murray, was a charming, original and very popular comedy. Phil Connors, a cynical, abrasive and self-centred TV weatherman (extremely well played by American actor Andy Karl), finds himself in Punxsutawney, Pennsylvania, and stuck in a time loop, doomed to spend his life repeating the same day over and over.

He invariably wakes up at 6.00 am and it is always February 2. There is no tomorrow. And he will go on reliving the same day until he improves his character. It could be a 1930’s moral fable by Frank Capra.

Nobody knows for sure how many years Phil Connors spends in the loop. Danny Rubin thinks it must be in the region of 100 years.

Imagine what it would be like to repeat the same thing day in day out. Actors do it all the time.

Bill Murray had charm even when he was being charmless. So does Andy Karl who is very funny as Phil Connors.

The final section of the musical has a redeemed Phil Connors outdoing a redeemed Ebenezer Scrooge in acts of kindness. The sentimentality may gall.

But does Groundhog Day really need to be turned into a musical? Isn’t the movie sufficiently fulfilling in itself?

Can the team, that made the Matilda musical such a success, repeat that success again? The new show is aimed at a more grown-up and sophisticated audience.

Groundhog Day has only a short run at The Young Vic. It ends on September 17. Will it then go to the West End or will it go to Broadway? Either way it will need some cutting.