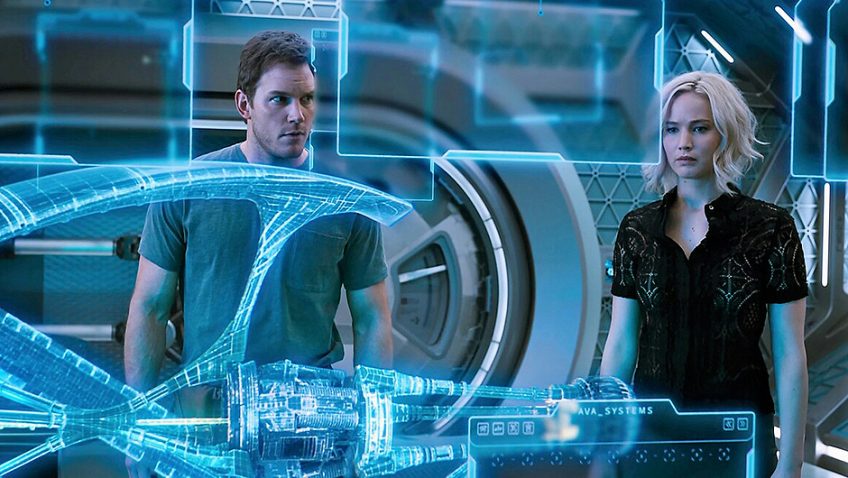 is such an intriguing nightmare that you might find yourself thinking, ‘well, here’s a take on space travel that will put Sir Richard Branson’s private shuttle clients off their dinner.’ The premise is promising as is the prospect of watching two of America’s hottest young actors – Jennifer Lawrence and Chris Pratt – alone on a manmade island in Space.

A high-spec travel and resettlement company is sending pre-paid, hibernating passengers and crew 120 years into the future on their ‘failsafe’ spacecraft Avalon. They are heading to Homestead II, an idyllic, green community in a galaxy far away that offers an alternative to an overcrowded, polluted, dead-end-prospect Earth.   But what happens if, like engineer Jim Preston (Pratt), you wake up early and find yourself all alone for the next 90 years?  Referencing sci-fi films like Moon, Gravity and The Martian and the atmospheric horror movie, The Shining, Director Morten Tyldum’s (The Imitation Game) and writer Jon Spaihts (co-writer, Dr Strange, The Darkest Universe) promise more than they deliver.

The Avalon, an enormous bow-shaped structure, crashes into a meteor, but life inside the ship looks normal.  As far as the eye can see are ‘pods’, coffin-like beds with curved glass tops. Inside, 5000 passengers dreaming of a fresh start are frozen in time until they will automatically awaken four months prior to landing.  Cabins await them (surely some will have to share) with, apparently, their clothing inside with recreation, entertainment, a full bar and restaurants. Due to a mechanical malfunction, Jim Preston (Pratt) wakes up thirty years into the journey. Initial shock turns to anger and then to resignation. Jim tries to make the most of the ships activities (it’s fun watching him discover the basket ball court, disco, self-service restaurant (as a basic fare customer, he is limited to regular filter coffee) and, amusingly, the infinity pool with a view of eternity. Then depression turns to panic when it hits home that he will be alone for the rest of his life, save for an android barkeeper, Arthur (Martin Sheen). The 258 crew members are all asleep and talking to the programmed ‘here to help’ recorded voices reminds us of Daniel Blake’s conversations with Social Services. Jim stops shaving and exercising and staggers around the isolates hotel/spacecraft like Jack Nicholson in The Shining. Jim gravitates towards the bar, where he drinks whisky and chats with the politely indifferent Arthur. Jack, too, comes to depend on a whiskey-serving bartender, but Lloyd is a frightening ghost-like presence, while Arthur is just vulnerable.

Then Jim sees hope in the beautiful form of a woman his age named Aurora Lane (Jennifer Lawrence). She is a talented writer/journalist, which apparently adds to the attraction. Watching her asleep in her pod, Prince Charming faces a moral conundrum: If he awakens this sleeping beauty she will not live happily ever after.

In Duncan Jones’ Moon, an employee of Lunar Industries has been alone in another sterile home-away-from-home on the Moon for three years, with only a robot/assistant for company. The loneliness is getting to him, but there’s something far more sinister going on.  The owners of Avalon are positively benevolent compared to Lunar Industries. In Gravity, two of the hottest stars of 2013 go for a spacewalk in a breathtaking recreation of outer space. Jim invites Aurora on a dress-up-date, and for a finale, they both climb into spacesuits for a romantic space walk. Unfortunately,  it’s not very thrilling or romantic. At the end of last year’s The Martian there’s a tense space rescue when Jessica Chastain rescues stranded astronaut Matt Damon. Toward the end of Passengers

Aurora decides to rescue Jim, trapped outside the Avalon, but the sequence is neither daring nor thrilling, and it’s even clear what is going on. This is a shame, as Tyldum’s breakthrough film, Headhunters, was the best thriller, and best adaptation of a novel of 2012, winning a BAFTA for Best Foreign Language Film.  The Imitation Game, Tyldum’s foray into English language film with A-list stars, was a disappointment by comparison.  Tyldum has demonstrated he can direct action sequences, but, unaided by a complacent script that neglects plot and character development for a nifty premise, the second-half of Passengers

languishes, like the characters. The second half is focused on the malfunction of the spaceship, but it’s neither tense nor visually exciting.  A mechanical engineer with no training in aeronautics and a journalist, have to track down the fault.  Yeah, right.

Of more interest to some in the audiences than mumbo-jumbo about a malfunction is the matter of Aurora’s wardrobe.   There must be a dry cleaning service on board as, aside from a sexy bathing costume, nothing she wears looks washable and easy to iron. But it’s the moral choice at the heart of the film that is the problem with these characters.  If you love someone, you want the best for them and would risk your life to save them. At least, you wouldn’t knowingly cause their death.

Even if Aurora decides to forgive and forget (not only his act, but his reluctance to own up to it), their sexual attraction and frequent tumbles in the hay (all tastefully toned down), are bound to produce children.  This races another ethical question. We never hear Jim and Aurora anguish over the morality of bringing up children who will know no one but their parents, and nothing in life but the inside of space craft. There might be a disco, but we never see a library.