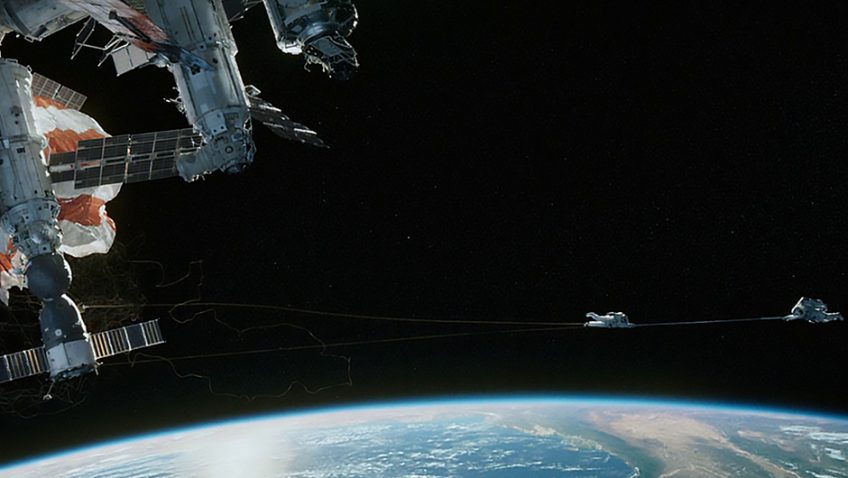 begins in media res: before you even realise the film has started you are in outer space and not in a cinema at all. Even the annoying people who text, talk or stuff their faces with popcorn at your local cinema will be silent, and it’s not only because, as a caption tells us, ‘600km above earth, there is nothing to carry sound’. The audience’s total absorption is almost guaranteed by the astonishing technical wizardry and masterful filmmaking that transport you from your seat and set you adrift in space.

would be best film of the year if it didn’t leave you yearning for two original characters and less sentimentality. The debut script from the Director’s son, Jonás Cuarón, starts free falling in the second half when you might feel that the atmosphere isn’t all that is lightweight about the film.

A caption at the outset informs us that the odds of both Mission Commander Matt Kowalski (George Clooney) and Mission Specialist Dr Ryan Stone (Sandra Bullock) surviving are small. ‘At 600km above plant Earth, the temperature fluctuates between +258 and -148 Fahrenheit…No air pressure. No oxygen. Life in space is impossible.’

Life seems to be promising enough early on when Dr Ryan, a space rookie, focuses on her mission to install a new scanning system on the Hubble Telescope. She is tied to the Explorer by a long cord. Although we can hardly see Dr Ryan through her padded space suit and helmet, it’s clear that she isn’t one for banter. She has something to prove to herself, if not to others.

Meanwhile, Kowalski, an experienced pilot who is still exhilarated by the beauty of his surroundings, keeps everyone relaxed by joking with mission control and his fellow astronauts. Within minutes, however, mission control warns them of trouble and Kowalski transforms into a leader who puts his crew first.

In destroying an obsolete satellite, the Russians have inadvertently started a dangerous chain reaction. Fragments of the satellite flying through space are gaining momentum and heading toward the Explorer. The debris storm destroys the space shuttle leaving Stone and Kowalski as the sole survivors, floating in space with limited oxygen.

There is no up or down in space, and Kowalski floats in and out of our, and Dr Stone’s, frame of vision. The film now focuses on Dr Stone, terrified and struggling to follow Kowalski’s instructions until she loses contact with him and mission control. What we know is that she must try to take off in a tiny capsule and make her way to an unmanned Chinese station if she is to ever return to earth again. We are man-handled once again as Dr Stone takes us with her, hurtling through endless space to the claustrophobic interior of a space capsule.

It is here that the film, having abandoned any refinement of George Clooney’s suave, flirtatious hunk-in-space character, tries to flesh out the character of Dr Stone. She, too, turns out to be a bit of a cliché, too, only not half as much fun as Kowalski.

Dr Stone might be brilliant, and the survival instinct might propel us all to unimaginable heights, but here her feats strain credibility. After all, we were told that she is a Mission Specialist on her first trip into space. And why does Dr Stone strip out of her space suit and helmet in a hostile environment and fly around in her underwear, if not to reveal Ms Bullock’s admirable, perfectly toned body? Instead of being transported further into space, we fly back a few months to Jennifer Aniston’s striptease scene in We’re the Millers to wonder whether this isn’t de rigueur for all former romcom actresses who have turned forty?

And before we can brush off that thought, Dr Stone is given a mawkish back story about an accident claiming the life of her four-year-old daughter – a tragedy from which she had clearly never recovered. Immediately, we are taken out of space and into Academy Award season as the space survivor becomes a famous actress shedding a human tear. Yes, even accomplished scientists cannot be disassociated from their primary calling as mothers. But given the rigorous psychological testing given to anyone spending long periods in space, how did this affliction, complete with suicidal longings, make it past the NASA psychiatrists?

Gravity is a must-see event film and nothing will dent the impact of the space scenes. It is, perhaps, the first film since 2001: A Space Odyssey that goes way beyond 3D to create a total sensory experience and force us to lose all cinematic points of reference. The computer effects and technical inventions used to create this total sensory experience are mind-boggling. Credit goes to Cuarón’s extraordinary team who include cinematographer Emmanuel Lubezki (Children of Men, The New World); visual effects supervisor Tim Webber (The Dark Knight) composer Steven Price and Production Designer Andy Nicholson (Sleepy Hollow and art work on Alice in Wonderland).