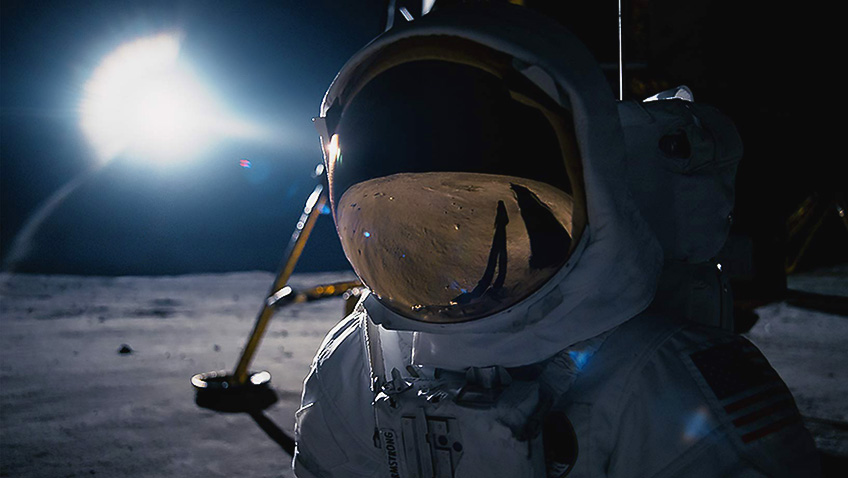 An insightful perspective of the space programme and Neil Armstrong

There is a scene in Damien Chazelle’s (Whiplash) hugely popular and multi-award winning romance La La Land when Mia (Emma Stone) and Sebastian, played by Ryan Gosling, dance (or rather their body doubles do) in the clouds under the star-gazing setting of the Griffith Park Observatory. In Chazelle’s fourth feature, no less ambitious than La La Land, though less colourful and more conventional, Ryan Gosling is the star-gazing pilot/engineer Neil Armstrong, the first man on the moon.

It is 1961 and Neil Armstrong is test flying an X-15 rocket plane, a first step in the Cold War space race that would culminate in Apollo 11’s moon landing in 1969. Landing in California’s Mojave Desert, we learn that Armstrong ‘bounced off the atmosphere’ and nearly died. His superiors recall three recent mishaps, including this one. They conclude, ‘He’s a good engineer, but he’s distracted.’

Armstrong, like all of the pilots we meet, but never get to know, has a home life, and his is particularly distracting. His two-year-old daughter Karen is dying of a brain tumour. He passes up opportunities to remain close by her until she dies.

He eventually responds to an announcement that NASA is selecting pilots for Project Gemini. He is asked if the death of Karen will have an effect on his performance. He answers, ‘I think it unreasonable to assume that it wouldn’t.

For the rest of the film until the actual Apollo 11 mission itself, we follow the brainy, workaholic, serious to the point of self-righteous, but dull loner Armstrong as he continually makes the cut through all stages of the selection process. We experience it all: The vomit-inducing training, the maths homework, the sacrifices and so on. 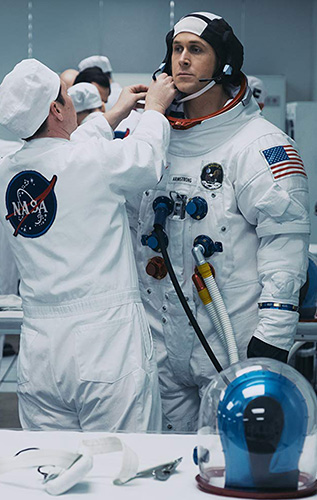 In 1966 Armstrong is chosen to be the command pilot of Gemini 8. In arguably the best sequence of the film he and David Scott (Christopher Abbott) make history by docking with the unmanned Agena rocket. They are elated. But within seconds there is a malfunction which sends the spacecraft into an uncontrolled spin. It is not really a tense moment as we know the outcome, but we feel the claustrophobia and the mechanical noises – and heavy breathing – inside the craft as if we were there.

Armstrong decides to separate from the Agena and he skilfully gains control of the Gemini. What we do not see is the famous emergency splashdown in the Pacific that is what many over people alive at the time and old enough will remember.

Over the course of the training, Armstrong, his first wife Janet, (valiantly played by Claire Foy in a limiting role) has since given birth to a second son, but he is still grieving and marked by the deaths of various colleagues. In a fascinating sequence Chazelle shows us the public reaction to the deaths and the costly loss of taxpayers’ dollars when missions fail. Black poet Gil Scott-Heron raps, ‘I can’t pay my doctor’s bills/ but Whitey’s on the moon’, while celebrity author Kurt Vonnegut would prefer that taxes go to creating ‘a habitable New York City.’ John Kennedy provides the opposing, visionary view, but we don’t see the effect on the astronaut’s morale.

Chazelle keeps us focused on the danger of the job. On the eve of the Apollo 11 mission Janet is furious with her husband. ‘Pat’s children don’t have a father and you’re spending the last few minutes packing?’ We know that the packing is a psychological distancing mechanism. (Coping mechanisms are scattered throughout the film.) Every bit the engineer and commander, when he call the boys to say goodbye, it is a Q & A session ending with, ‘do you have any other questions?’

The reference to Pat is to Patricia White (Olivia Hamilton), Janet’s friend. We see how her husband Ed (Jason Clarke) is killed when a fire breaks out in the capsule during a pre-launch test for the Apollo 1. Also killed in the fire are Gus Grissom (Shea Whigham) and Roger Chaffee (Cory Michael Smith), but these characters are sketched in so lightly that they never become real people. 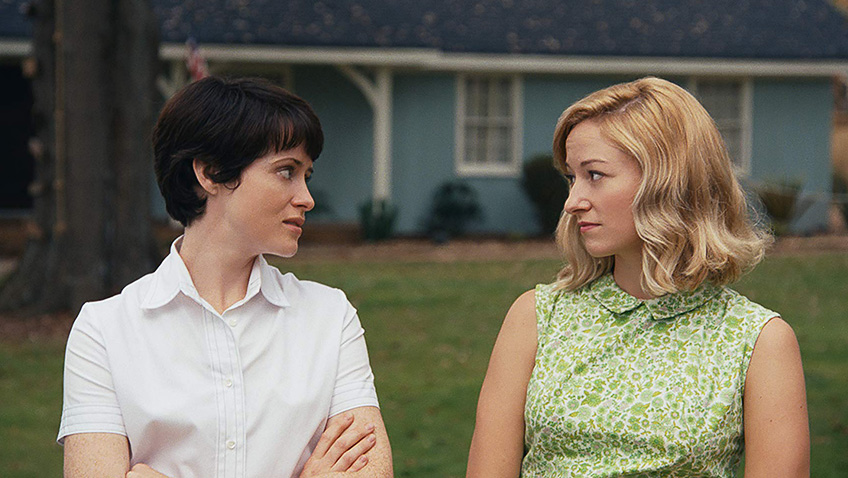 Special effects and patriotic feeling have changed since Philip Kaufmann’s ebullient movie, The Right Stuff in 1983, but we still want great characters, a bit of fun and heroic moments. Surprisingly in a script by Josh Singer, the co-writer of the Oscar winning film, Spotlight, we are made to go without. We never get a sense of the camaraderie and the excitement of the missions. Of course these men were scientists, engineers and heroes for their ability to face death every day, but 100 million people did not tune in to the moon landing to see them die.

There is one memorable show of wit in First Man

but it is in the form of a subtle rebuke to a ‘frivolous’ colleague, which is typical of this Neil Armstrong. At a press conference, Buzz Aldrin (Corey Stoll) says that he will take a piece of his wife’s jewellery to the moon. When asked what he would take, Armstrong replies, ‘I’d take more fuel.’ (Ironically, Armstrong does take jewellery to the moon. In a touching, if sentimental scene, he symbolically releases Karen’s baby bracelet to the heavens.)

On July 16, 1969, Armstrong, along with Aldrin and Mike Collins (Lukas Haas) are blasted into space from Cape Kennedy and four days later their lunar landing module, which we see being guided manually by Armstrong, touches down on the Sea of Tranquillity. There is a wonderfully abrupt sound change to pure silence, but you can be certain that the real astronauts were more overwhelmed than we are. 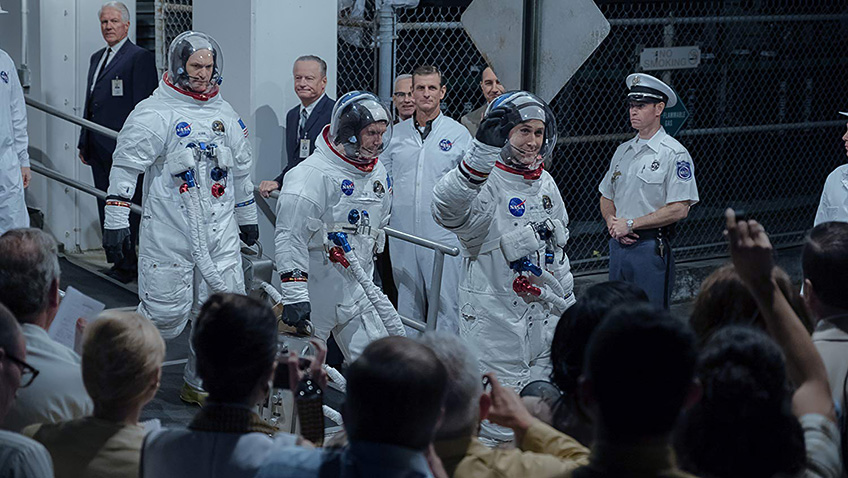 Armstrong climbs down a ladder and utters the now famous, “That’s one small step for man, one giant leap for mankind.” His omission of the word ‘a’ in that rehearsed line is one of the few signs of emotion we get out of Armstrong, apart from his tears for Karen. Ever since Half Nelson Gosling has specialised in brooding, moody, somewhat depressed heroes, so perhaps the casting is overkill.

After 2001: A Space Odyssey, Gravity and The Martian the space travel here is not particularly awe inspiring, although it might be in an IMAX theatre. Unlike Commander Lewis’s race against the clock attempt to save Mark Watney in outer space in The Martian, suspense is limited by our limited expectations. Technically accomplished, First Man

provides an insightful contemporary perspective of the space programme and its leading man. But it is still disappointing to leave the cinema depressed at America’s finest hour.