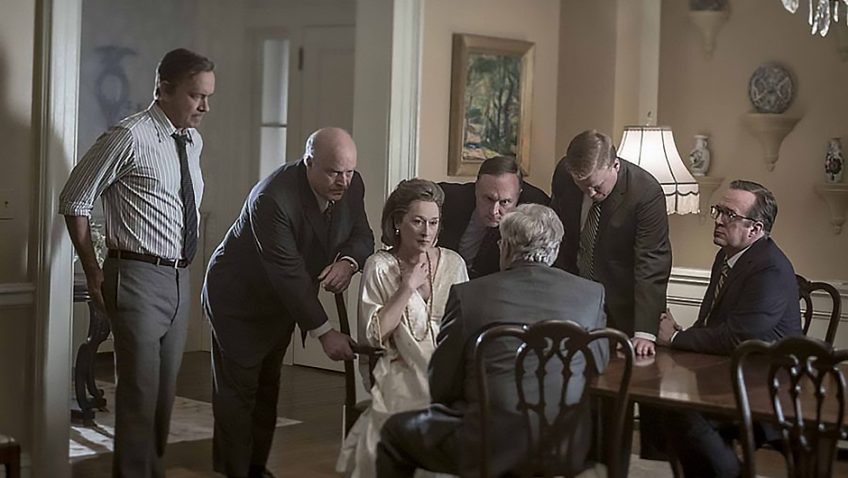 Director Steven Spielberg (age 70), actress Meryl Streep (age 68) and actor Tom Hanks (age 61), double or triple Academy Award winners all, turn their talents and gravitas to a true story that pits dodgy claims of national security against press freedom; presidential fake news against journalistic truth and intimidating male suits against Katharine Graham (Streep), America’s first female head of a major publishing company and CEO of a Fortune 500 company. Timely and relevant? You bet. But Spielberg didn’t rush through a film to coincide with Fire and Fury

or the feminist Me, Too campaign. The events described in The Post

is a dramatic and moving tribute to investigative journalism. In the words of Justice Black, First Amendment stated that “Congress shall make no law… abridging the freedom of the press…’ which should be in the interest ‘of the governed and not for the governors.’ But although Spotlight’s writer, Josh Singer was brought in to enhance Liz Hannah’s script, the two films have different focuses. Spotlight was about reporting and writing a story, while The Post

is more about the business of running a paper. The Post

shows how a second-rate newspaper put itself on the map, leading to their breaking the Watergate burglary scandal the following year.

Long before WikiLeaks, in 1971 Military Analyst for the Rank Corporation Daniel Ellsberg – who had worked in Vietnam – releases to The New York Times the top secret ‘Pentagon papers’. Curiously, these candid papers had been ordered by Ellsberg’s previous boss, Secretary of Defense Robert McNamara, to be a record for posterity. Ellsberg felt the public had to know how Presidents Truman, Eisenhower, Kennedy, Johnson and Nixon had deliberately covered-up the truth about Vietnam. They sent thousands of boys to their deaths when they knew it was a hopeless cause simply to avoid a humiliating US withdrawal.

When Times reporter Neil Sheehan scoops the story, Washington Post editor Benjamin Bradlee (Hanks) announces that he’s ‘tired of reading the news rather than reporting it.’ Before this bombshell headline in the NY Times, Bradlee could have been referring to Patricia Nixon’s wedding, as The Post’s reporter Judith Martin (Jesse Mueller) had not been invited. Ironically, when President Nixon slaps an injunction on the Times to cease publication, Bradlee senses his big opportunity.

There are two problems. The first is that The Post still doesn’t have a copy of the Pentagon Papers and the second is that publisher Katharine Graham, might block the publication. While Bradlee asserts his editorial freedom, he knows that Graham is in the process of taking the cash-poor company public to expand its roster of journalists. A charge of Treason under the Espionage Act 1917 would scare the bankers and nullify the float agreement under a Catastrophic Events clause.

In a race against the clock, Bradlee addresses the first problem by assigning his well-connected new investigative reporter Ben Bagdikian (Bob Odenkirk) to obtain the papers. He does this by tracking down the New York Times’ source. Now exposed and facing criminal charges, Ellsberg is hiding out in a Boston motel where Bagdikian promises him The Post will publish.

In Washington, while Bradlee and a team of reporters digest the 4,000 unnumbered pages in an all night race against the clock, The Post’s lawyers come calling. 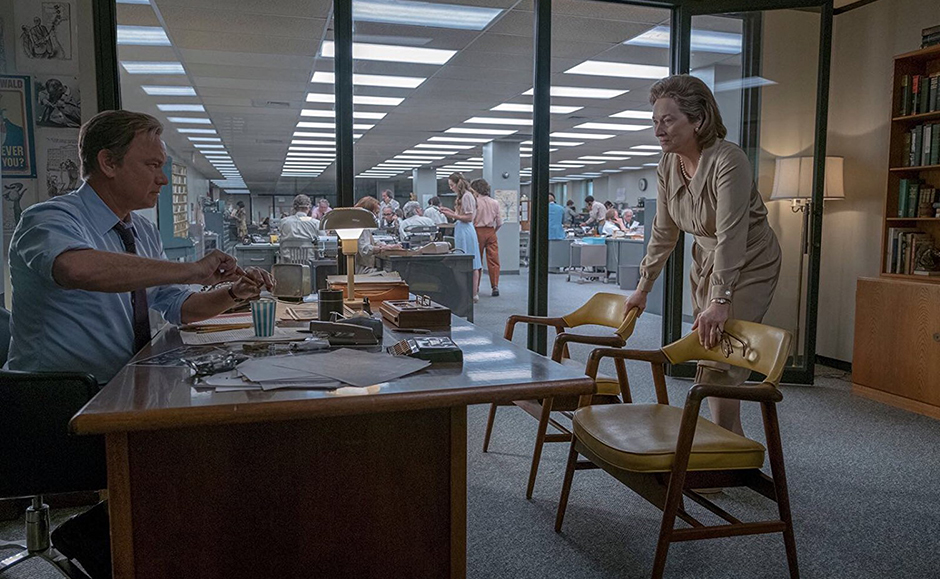 The lawyers arrive at the all night writing party because Bradlee’s second problem remains. Will he be allowed to publish? His relationship with Graham is well described in the film, as they balance one another in the same way a producer, responsible for the budget and legal matters relates to a film director eager to make his name. But for Graham, the challenge is much greater and more personal.

Graham’s wealthy and influential father handed the paper over to Graham’s husband, Philip Graham, when they married. In what today would be considered an unacceptable conflict of interest, the Graham’s socialised with Presidents Kennedy, Johnson and Reagan and their wives. After Philip’s suicide in 1963. Robert McNamara in particular remains a frequent guest at Kay Graham’s dinner table.

When Philip’s death, Kay took over the paper and McNamara advised her on the composition of the Board. All old cronies and friends of Philip, the Board, represented here by conservative Arthur Parsons (‘West Wing’ star Bradley Whitford) patronise Graham and undermine her confidence. As the only female publisher/owner of a major paper she had no role models.

When Bradlee pays Kay a visit (she is always giving dinner parties or attending functions) he insinuates that her hesitation is a result of her friendship McNamara, whose position would be damaged with publication. Two can play the game and Kay reminds Bradlee that he was a close friend of Kennedy. Now the two have to leave these allegiances behind in a show of solidarity with the New York Times. 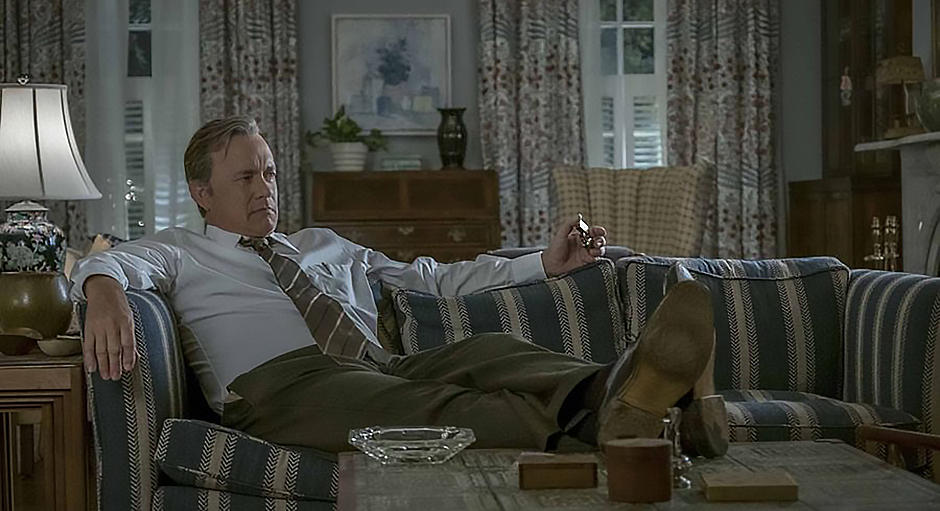 Will Bradlee’s work raise the paper’s profile or bring it crashing down? The second half of the film in particular is fast-paced, riveting and uplifting. Graham’s decision is made in a nail-biting series of scenes which are intercut with the printing press workers and the distribution van drivers awaiting the phone call before it is too late.

Elegant and well made as the film is, Tom Hanks’ character (not to mention the fascinating Bagdikian) is sidelined to focus on Graham’s empowering transformation. And yet while Spielberg shows Graham being applauded by young woman on the stairs of The Supreme Court, this empowerment was, in reality all the greater because her story is much darker. For Philip, an alcoholic with mental illness, belittled Kay in public and was an abusive husband, a fact not even alluded to in a schmaltzy scene with Kay’s daughter (Alison Bree), full of expository dialogue.

Still, with The Post now in the hands of taxaphobic Amazon Chief Executive Jeff Bezos, this is a story worth telling and Spielberg tells it with grace and conviction. Graham’s courageous decision and Justice Black’s verdict bring a lump to the throat and should drive us all out to buy a newspaper before they all disappear.