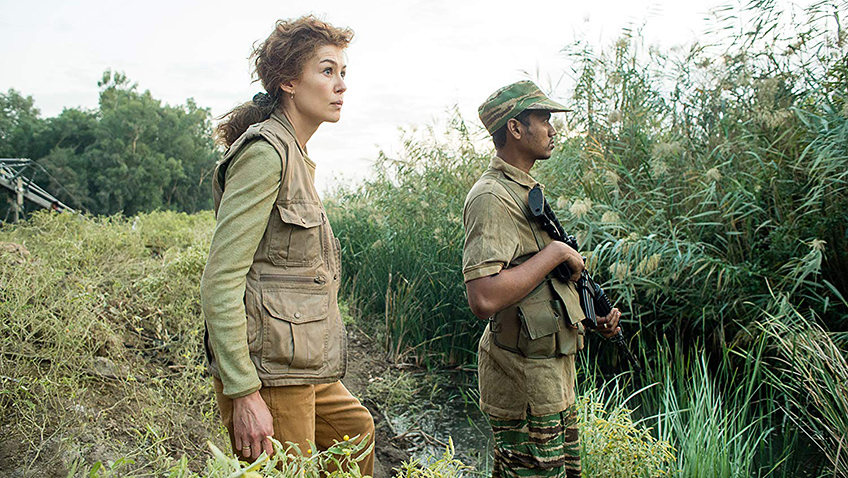 The title of Matthew Heineman’s unforgettable and powerful first feature film differentiates it from his documentary work about the Syrian war, City of Ghosts, where no one person is the focus. A Private War

is no less of an indictment of war, particularly when a tyrant slaughters his own people and journalists as the world watches. The title takes on a metaphorical meaning when applied to real-life Sunday Times journalist and war correspondent Marie Colvin (Rosamund Pike). The American born, Yale-educated Colvin’s battle with the job she could never give up rewarded her with front-pages, prizes and accolades, but cost her two marriages, her sleep, her sobriety, an eye and ultimately, her life.

Marie Colvin told her fellow journalists, ‘our mission is to speak the truth to power. We send home that first rough draft of history’. Her story has the advantage of being fresh, as many viewers will remember reading Colvin’s articles in The Sunday Times from war zone to war zone. Some might recall her final, courageous broadcast from Homs, which made it impossible for Assad’s regime to deny that his forces were targeting civilians. Homs is a framing device for the film which begins and ends in that hellish wasteland. Colvin’s career is presented as a countdown to Homs.

It begins in 2001 in London, 11 years before Homs. By this time the reporter, who came to specialise in the Middle East, had covered conflicts in Chechnya, Kosovo, Sierra Leone, Zimbabwe and more. We see her coming home from a night out with Professor David Irens (Greg Wise) – a former war correspondent. Lying in bed she suggests that they might remarry. Irens replies, ‘I don’t think that such a good idea’ – a response that is also valid for her suggestion that they ‘try for a baby again.’

While the film strives for authenticity in tracing Colvin’s arduous life in the field (Pike chain smokes with Colvin’s real lighter) the resulting PTSD and alcoholism, the specifics of her romantic life rely on creative licence.

Wise’s character, who, in the film, is Marie’s escort and occasional lover up through her return from the Sri Lanka, might represent Colvin’s first husband, Patrick Bishop, a journalist. But their 1989 marriage ended in the early 1990s, and by 1992, she was already remarried to intrepid war reporter Juan Carlos Gumucio. In the hotel bar where the press congregate in Fallujah, we see Colvin lock eyes with a journalist who looks a lot like Gumucio, and they rendezvous in his hotel room. But Gumucio, who was living in Bolivia in 2001, and committed suicide in 2002, does not seem to have been included in the film. 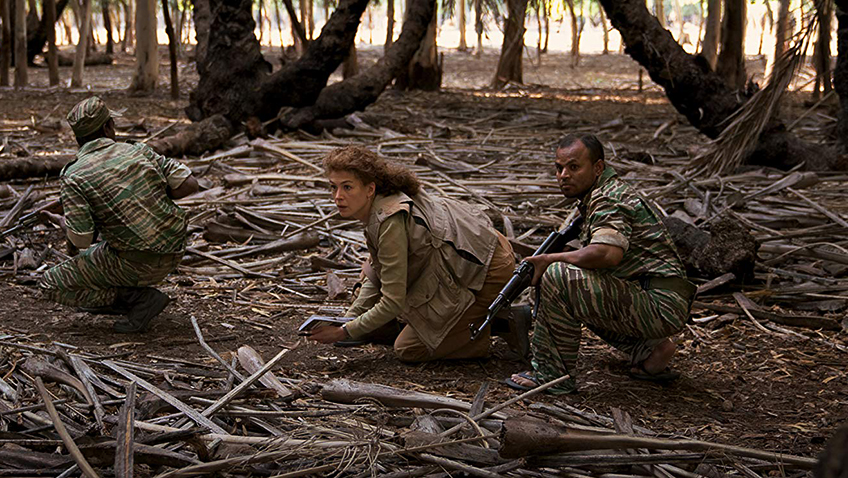 Rosamund Pike in A Private War

Instead, at a party in the second half of the film, Colvin meets a wealthy city worker, Tony Shaw (Stanley Tucci), and they have a relationship until the time of her death. What we can conclude is that sustainable relationships were difficult and a normal family life with children was impossible in Colvin’s line of work.

The film follows Colvin to Sri Lanka where she succeeds in interviewing a leader of the Tamil Tigers and attempts to learn their point of view without letting him off the hook. ‘Sure, the government is blocking leading supplies routes, but what little is getting through is stolen by your own army,’ she states conclusively, leaving the ball in his court. On patrol with the Tigers, they are ambushed. Colvin stands up yelling ‘press’, but is seriously wounded. ‘They knew what they were doing,’ she later stated.

In a complete contrast to the arid land, poverty and bloodshed of a barely civilised Sri Lanka, we are whisked back to the British Press Awards and Colvin, now with her famous eye patch from the Sri Lanka attack, is given a standing ovation as 2001 Foreign Correspondent of the Year. After separating definitively with David, she travels to Iraq where she hires freelance photographer Paul Conroy (Jamie Dornan) on the spot, while ignoring an army press liaison’s lecture to the embedded journalists. Colvin has no time for rules. She is off to witness the uncovering of a mass grave with a driver/interpreter and Conroy, an exclusive story. When their van is stopped by armed militia Colvin pulls out her Health Club card, and tells them she is a nurse. After a few tense moments, during which the Iraqi interpreter prays with his eyes closed, the militia leader lets them go, adding, ‘they don’t need any doctors where you are going.’

Back in England Colvin is suffering from panic attacks and recurrent visions of a young girl dead on a blood stained bed and alcoholism. A friend persuades her to get help and she checks into a rehab centre. When Paul comes to visit and they talk about PTSD, Colvin mentions her two miscarriages and her fear of both growing old and dying young. 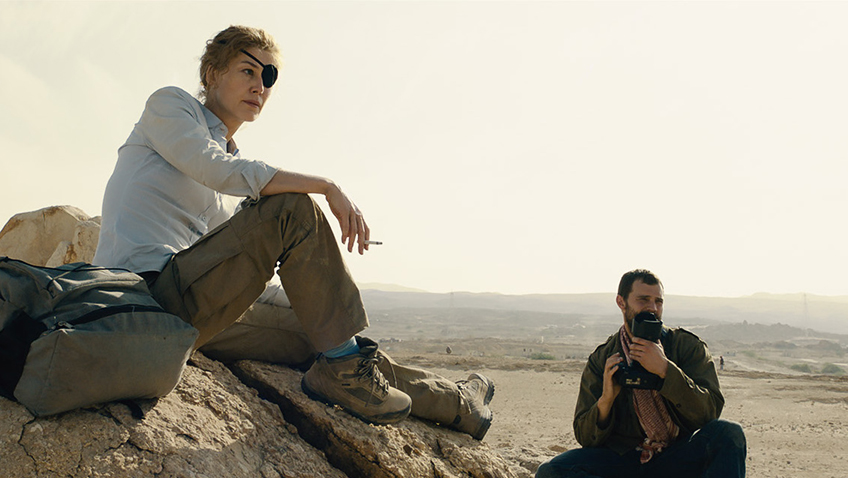 Rosamund Pike and Jamie Dornan in A Private War

The script, by Welsh writer Arash Amel, is uneven. Often penetrating, witty and gritty, and convincing, it is also plagued with expository writing and an unsatisfactory characterisation of Sean Ryan (Tom Hollander) The Sunday Times Foreign Editor. When he visits Colvin in rehab, he tells her how much the department misses her, affirming, ‘you’ve got a God given talent’ (he also utters the line, ‘no one in their right mind would do what you do’) – although it is clear this ‘insanity’ sells advertising and wins awards. On the other hand, Ryan insists that she is in no condition to return to work. Is this a devious ploy to elicit the desired response from Colvin, one which she fails to see through? Colvin tells him that if he wants to become the mostly highly regarded editor on Fleet Street, he has to let her back in the field. She really didn’t need to ask.

During the Arab Spring movement Colvin is sent for a second interview with the Libyan dictator, Muammar Gaddafi, who had flirted with her in the 1980s, and tries on the charm in response to her accusations in their 2011 interview. This is a wonderfully written and acted scene, but nothing quite prepares us for Heineman’s masterful coverage of Colvin’s last days alive in Homs. The fear; the exhaustion; the cold; the despair and Colvin’s determination to speak for the silent are palpable.

Pike’s performance is nothing short of remarkable: not only a career best, but one of the year’s best, as without her utterly convincing portrayal there would be no film. To some extent Dornan redeems himself from his Fifty Shades of Grey franchise, manipulating the actual cameras from Homs, on loan from the real Paul Conroy, as would a battle-hardened war photographer.