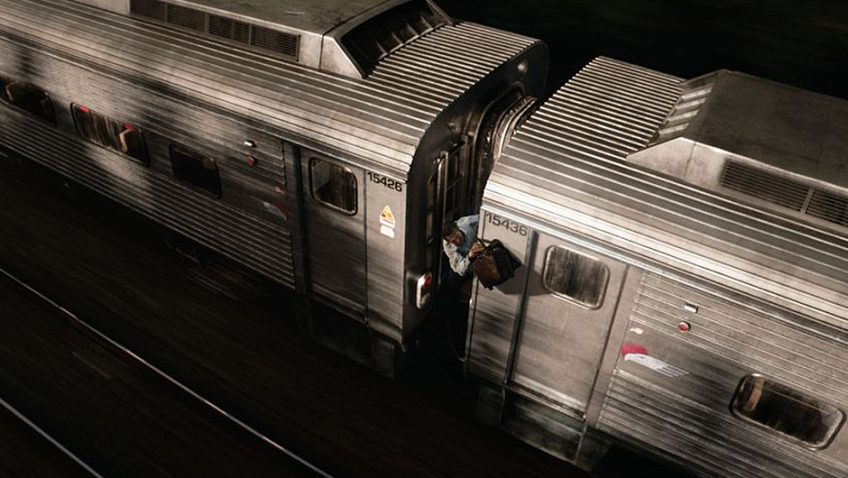 Liam Neeson should have missed this train

is not an adaptation of the eerie Philip K. Dick short story of the same title, although Jaume Collet-Serra (The Shallows, The Orphan), would be high on the list to direct it. Until then, we have Collet-Serra’s fourth collaboration with Mr Charisma, AKA, Liam Neeson, so that’s something. And Neeson, playing man-on-a-train, Michael McCauley, remains the key attraction in a fast-paced thriller that keeps us guessing until it becomes too silly to bother.

If the duo’s first collaboration, Unknown was a tribute to Roman Polanski’s Frantic, both Non-Stop  and Run All Night are in the ‘washed-up, on-the-bottle’ former hero needing redemption genre. Neeson plays a former air marshal and hit man respectively, forced back into the game to save innocent lives and become a hero.

is not all that different, except that this time, Neeson plays a sober insurance salesman, happily married to estate-agent Karen (Elizabeth McGovern) but worrying about the mortgage and son Danny’s (Dean-Charles Chapman) university education. When Karen reassures him, ‘you’ll find a way; you always do’, she’s clearly winking at the audience through the fourth wall.

Arriving in NYC at 8:10 as usual, little does Michael suspect that if he is going to find a way, it’s about to get a whole lot harder. When he arrives in the office, he is laid off. His heartfelt plea: ‘I came here from Ireland with nothing… I’m 60-years-of-age – five years from retirement…’ changes nothing. His boss adds this patronising note: ‘You’re a good soldier; you play by the rules. The truth is that sometimes soldiers end up as casualties.’ Could this be another wink?

Michael meets up with a friend and former colleague, Alex Murphy (Patrick Wilson) for a badly needed pint. Here’s where we learn what every Liam Neeson fan suspected, that Michael is no mere insurance peddler. He’s a former cop who gave it all up for his family. If the filmmakers hammer home the ‘family’ points, it is to help explain Michael’s motivation and desperation later on.

‘In the seven years we were together,’ Murphy tells us in expository dialogue, ‘you had my back. It’s a good thing that you got out. It’s all politics now,’ he adds casting a ‘he’s the real villain’ look at Michael’s former supervisor, Captain David Hawthorne (Sam Neill). If it’s a coincidence that Hawthorne is in the same pub at the same time, that’s nothing compared with what happens on Michael’s train ride home. 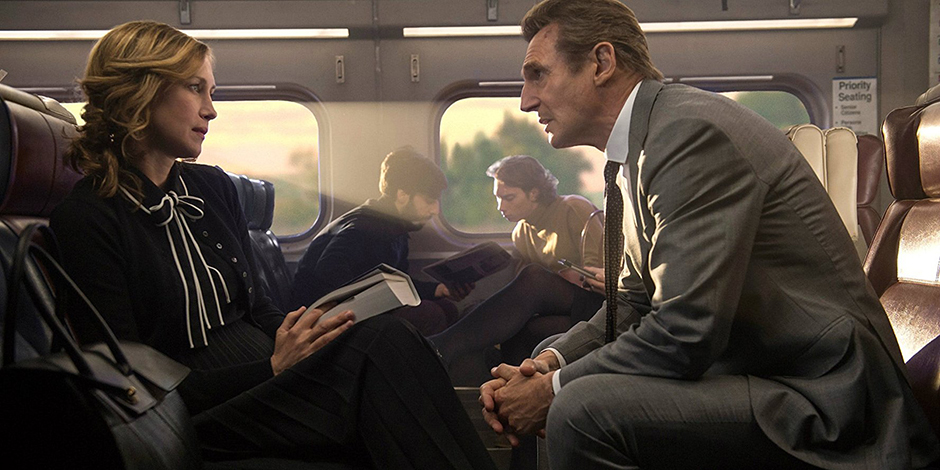 Liam Neeson and Vera Farmiga in The Commuter

Even before sitting down, a stranger bumps into him in the crowd stealing his mobile phone. Could the day get any worse? Is the sun hot? After a nod to the regulars, Michael sits down to read the Danny’s copy of The Grapes of Wrath, before noticing that a mysterious, predatory female who will introduce herself as Joanna (Vera Farmiga) is staring at him. When she sits down opposite Michael, he tells her that he is married. The woman answers, ‘so am I’, before getting down to business. Joanna is not looking for romance, nor the answer to her question, ‘what kind of man are you?’ She seems to know already as she has not chosen Michael randomly.

She knows he is an ex-cop and she knows that he he will be tempted by the ‘reward’ of $25,000 up front and a $75,000 after the job is done. All that he has to do is identify a person who does not fit in carrying a bag containing something illicit before the person gets off the train. Michael is not a free agent in accepting this offer. if he rejects the deal, all the passengers and his family will be at risk.

Collet-Serra has already shown us that the claustrophobic confines of a plane need not limit the action, stunts and running around that have defined a Liam Neeson movie since his action-man transformation in Taken, ten years ago. With the talented Paul Cameron’s (Total Recall, Man on a Ledge, Collateral) dizzying camerawork, Nicolas de Toth’s (Hungarian action director Andre de Toth’s son) fast editing and enough red herrings to stock a Soviet refinery, Neeson hardly needs a seat in this train ride to suburbia.

you can’t help but wonder if it is not an experiment to see how outlandish a plot can become before audiences give up on Liam Neeson. Tears of laughter are not what Collet-Sera had in mind when he ups the ante to new levels of mindlessness, but at one point we were all doubled over laughing. The wasted talent count is higher than the body count and includes McGovern, Farmiga, Neil, Jonathan Banks (Mudbound,TV’s Wiseguy and Breaking Bad) and Florence Pugh (Lady Macbeth)