Home / LIFESTYLE / REVIEWS > / FILM REVIEWS / Next time the NHS ambulances whiz by, spare a thought for the Ochoa family 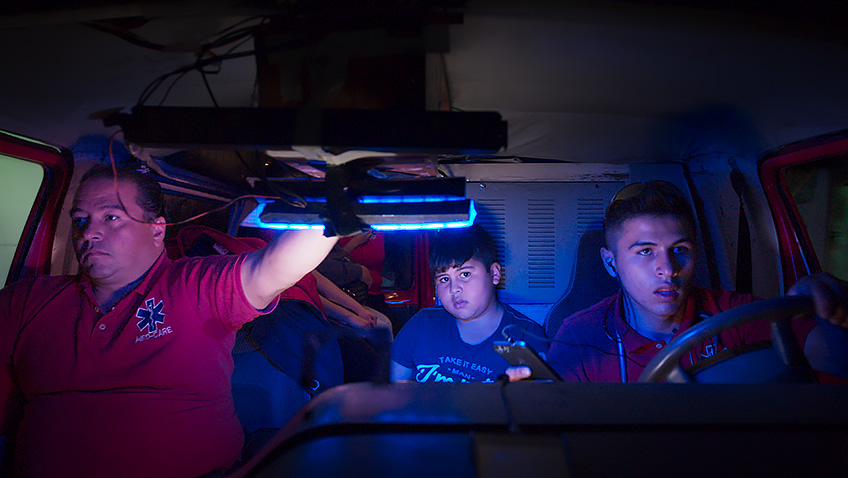 Next time the NHS ambulances whiz by, spare a thought for the Ochoa family

When British politicians and NHS chiefs periodically visit other countries to gather tips on our health services might improve, one city that will not be on their agenda is Mexico City. In producer/director/cinematographer and co-editor Luke Lorentzen’s gripping documentary this already fascinating city, trapped in a valley of smog at a high altitude on a mountainous plateau, becomes all the more so after we meet Fer Ochoa, and his sons Josue and Juan. This engaging, hard-working, dedicated, if morally compromised family patrol the traffic-jammed streets of the city to plug a municipal financing gap. Mexico City, the most populous city in North America, has just 45 official ambulances for population of 9 million.

Lorentzen, operating as a one-man film crew, is embedded with the Ochoa family’s Medcare transport service, because one never knows when the radio in their used, adapted private ambulance will signal the mad dash for the destination. A code 41, for a drunk person, is of no interest, but a Z-4 sets off their sirens.

We quickly appreciate that the Ochoas are not the only enterprising entrepreneurs desperate to eke out a living in this competitive market. They can rest assured the official ambulances will not be around at midnight, but the competition, and the police, will be. Each response is a race to the scene of an accident, with Fer or Juan, depending on who is driving, shouting directions to the driver or, through a loud-speaker, orders for vehicles to move over to let them pass.

During the course of the documentary the Ochoas have four patients in their ambulance, in one case, providing their basic paramedical training to make a patient more comfortable. A man obviously too poor to pressure for money is reprimanded for his bad parenting, while the the mother of a 16-year-old girl head-butted by her rogue boyfriend, with a broken nose and swollen lips, asks the price and then declines to pay the 3,800 pesos (about £150). At one point the Ochoas are so desperate they ask for a contribution to their expenses.

It is when deciding which hospital to check into that things become more complicated. We notice that Medcare steer the patients away from city hospitals (long queue of ambulances signally long waiting times) for a particular private hospital where Fer claims he has been well treated in the past.

Medcare recommends, but theoretically, the patient or his or her guardian has the choice. But in a situation of panic, and certainly for the mother of young girl who has fallen out of a fourth-floor window suffering severe head injuries, that guardian is likely to be traumatised and open to suggestions. In this hair-raising scene where there is a check on the girl’s vital statistics every few minutes, we are in the front seat with the terrified mother as the ambulance races through the city to the hospital. 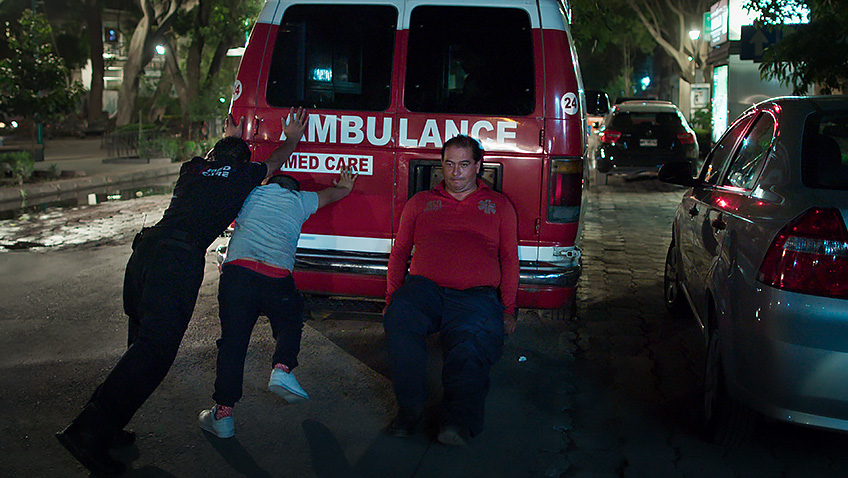 We hear snippets of conversations with the police who take payments to allow the Ochoa ambulance to remain on the streets, and bits of conversations with patients who politely haggle about the fee as though in a Moroccan carpet market. After paying to be admitted to hospital, you can understand why some patients do not wish to pay for the service, but you also see how people take advantage of the ambulance service, which they know are not only unregulated, but illegal and cannot sue for non-payment of invoices.

While the medical call outs are riveting drama, the scenes of down time which allow us a look of the lives of this family, are equally absorbing. Young Josue has little to do with the operations side of the business but is happier being tossed around in the back of the ambulance than in school. The family knows the value of education and force the chubby, good-natured boy to attend school, collecting him at the end of the day to begin the night shift.

Josue’s 17-year-old sibling Juan, who still wears braces, lets off pressure by chatting with his girlfriend about the night’s exploits. Fer, who is popping pills that are either medication or painkillers, has his own health issues. It is the surprisingly mature and professional Juan who is the backbone of the operation. His bed side manner and basic medical skills are commendable, and his knowledge of the city and streets and driving skills are astonishing.

During these nocturnal pauses we see how three nights of work with only one payment takes its toll. They run out of petrol and have to push the van to a petrol station and borrow money to fill the tank. Packets of crisps and other junk food is the main staple, with a can of tuna mixed with corn and mayonnaise on crackers serving as a make-shift tortilla feast.

These interludes create a great deal of sympathy for the family which has to go a long way, particularly when a mother accuses the family of having intentionally by-passed a closer hospital in favour of the private hospital of their choice.

Lorentzen’s ability to follow one family so intimately is an achievement, but it results in a documentary that while fascinating and engrossing from start to finish, raises many unanswered questions. You may want to know, for example, how other private ambulances operate, and if they all have the same low payment to transport ratio. We want to know more about the moral compromises alluded too, but perhaps that is impossible in a film hoping to gain international public exposure.