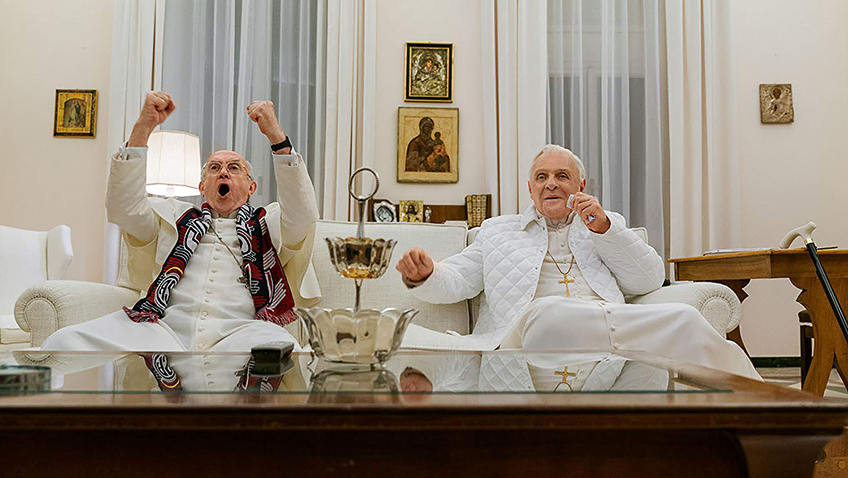 The Two Popes (Netflix). Pope Benedict resigns. No pontiff has done that for 600 years. Anthony McCarten’s excellent screenplay, directed by Fernando Meirelles, imagines an intimate conversation between the conservative traditional Pope and the more flexible future Pope Francis who is appalled by his decision. The two men disagree on major issues. The dialogue and the performances and rapport of Anthony Hopkins and Jonathan Pryce are totally convincing. There are flashbacks to Francis’s time in an Argentina run by the Junta. The extremely handsome production includes the recreation of the Sistine Chapel.

Joker (Warner Bros). Send in the clowns. Don’t bother. They’re here in New York and dispossessed. This Joker is a sociopathic clown who wants to be a stand-up comedian; but nobody finds him funny. He is too freakish. He has a medical condition which makes him laugh uncontrollably. The bigger his smile the greater his pain. He is beaten up, fired and deserted by the social services. His mother is sick. Joker, a tragic embittered figure, finally cracks. Joaquin Phoenix’s tense, nimble, terrific physical performance, which won him an Oscar, never loses the audience’s sympathy. Robert De Niro is the smug TV show host who humiliates him. Todd Phillips directs.

Scandal (BFI). 19-year-old sleeps with the Secretary of State of War and a Russian spy and brings down the Tory Harold “You’ve Never Had It So Good” Macmillan government in 1962. The girl was Christine Keeler (Joanne Whalley) still famed for an iconic photograph of her straddling a chair. The minister was John Profumo (Ian McKellen with a Samurai haircut). The spy was Yevgeny Ivanov. The media had a field day. Mandy Rice-Davies (Bridget Fonda) is still remembered for her riposte, “Well he would, wouldn’t he?”, said during the trial when Lord Astor denied having an affair and even knowing her. And the person who brought them all together was playboy charmer and scapegoat, osteopath Stephen Ward, charged with living off the earnings of prostitutes. Michael Caton-Jones’ 1989 film is very much on Ward’s side. John Hurt is excellent. It was Hurt’s favourite role.

Official Secrets (Entertainment One). This political thriller directed by Gavin Hood is a tribute to a brave whistleblower whose motive was to stop the illegal war with Iraq and save lives. Katharine Gun, translator at GCHQ, took an extraordinary risk when she leaked a top-secret memo to the press. She put her moral duty to her country above her duty to the government and was prosecuted under the Official Secrets Act. The British Establishment came out badly. She was threatened by the police and denied a lawyer. Attempts were made to deport her Turkish Muslim husband. A Human Rights lawyer came to her defence. Keira Knightley is excellently understated as Katharine Gun.

Raining in the Mountain (Eureka). The 1979 King Hu film, a spiritual Buddhist fable, begins with a long walk through beautiful landscapes to Bulguksa Temple in South Korea where they are about to appoint a criminal to be the new abbot. He is more spiritual than the worldly monks, who are having difficulties meditating. The visitors have come to steal a priceless scared scroll. There is a lot of running and dodging in the Temple maze. The acrobatic fighting and the extraordinary high leaps and somersaults (with the aid of hidden trampolines) are akin to Peking Opera dances.