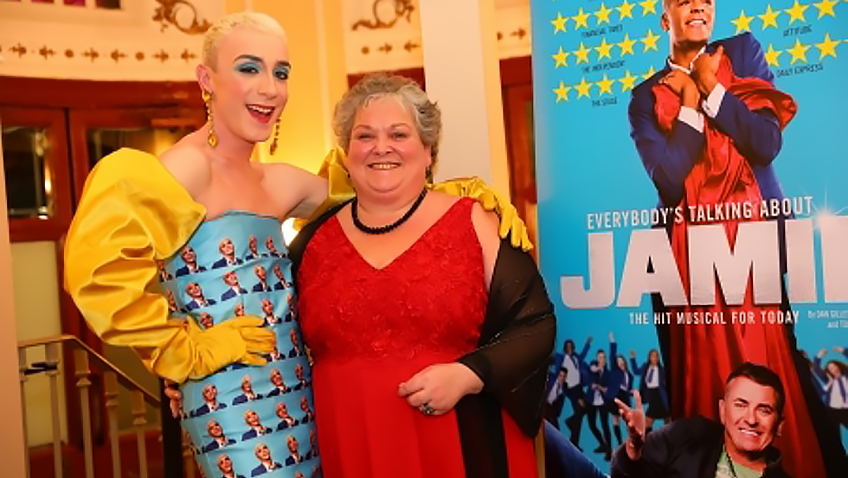 Everybody’s Talking About Jamie – and Margaret

Some years back, up in a working-class mining area in County Durham, 16-year-old Jamie Campbell was doing something totally outrageous and unacceptable. He was insisting he should have the right to wear a dress for his school prom. Fierce opposition came from all sides, and bullying. But with his mum’s rock-solid love and support, Jamie had the courage to weather the storms and fight on. So what did he do? He persuaded documentary-maker Jes Wilkins to follow his ongoing struggle on film, and Jamie: Drag Queen at 16

Even as a tot Jamie loved to dress up frilly, flamboyant and feminine. By 14 he knew he was gay, and his greatest burning ambition was to be a Drag Queen. He longed for the right just to be himself and for the freedom to feel fabulous. That was fine by mum, and she was more than willing to devote all her love, time and energy to helping him realise his dreams.

turned out to be the small snowball that set off rolling and just kept on going. All along the way it bumped into good fortune and got bigger and bigger and bigger. This month a new touring production of the sensational Olivier-award-winning musical Everybody’s Talking About Jamie, which first premiered at The Sheffield Crucible in 2017, is set to wow the nation all over again, and the West End production is still running. Not only that: a big-star film version is now in the can and ready to hit screens on October 23rd. That’s how big the snowball got.

It’s the real-life Jamie Campbell who’s the inspiration behind this phenomenon. He’s the Jamie everybody’s talking about. They talk about his mum Margaret, too, the biggest support and inspiration in his life. Now Eileen Caiger Gray talks to them both, and finds both of them kind, obliging and beautifully chatty.

‘Surreal is the word,’ says Margaret in her attractive Durham lilt, ‘Our life is more surreal than we’d ever dreamed it could be. Nowadays we’re rubbing shoulders with the stars. But for us, surreal has become normal, if you know what I mean.’

and saw its potential as a stage musical. Not only did his contacts agree, but Michael Ball just happened to know that Dan Gillespie Sells and Tom McRae were two songwriters looking for a story right there and then. Jamie and Margaret gave the writers full rein to use the story as they chose without input or comment from them. Fictional details were added for dramatic purposes, but the heart of the story is all theirs.

‘We were watching our own lives. We felt we’d been put through the wringer, our emotions were so raw,’ says Margaret, speaking of the big Premiere Press Night in 2017, which was the first time she set eyes or ears on any of it at all. After the finale, the pair clung together and wept. Both say they’ll never forget the massive emotional impact that first night had on them. Jamie calls the show “a mirror”. And it’s a mirror that reflects both the traumas and the triumphs of their lives on that bumpy journey from schoolboy to Drag Queen.

What brings them special joy is that countless, ecstatic audiences are now sharing that emotional journey through their lives. This musical isn’t just a glitzy entertainment: it’s a show that wants to change attitudes and dissolve prejudices. And it seems to be doing that. ‘Yes, there are still people who are mean, but things have moved on,’ says Jamie (with much less of a lilt than his mum), ‘I get so many messages thanking me for helping others like me to feel fabulous and free.’

Margaret, meanwhile, hears mainly from parents asking for advice on how to support gay sons or cope with bullying. The two of them are both all too eager to help, and passionate, too, about giving talks on these issues at least once a month to schools and community groups. The show itself is a “theatre partner” of the Diana Award, a charity established in 1999, which promotes anti-bullying programmes, mentor programmes and workshops, and awards youngsters for social and humanitarian achievements. ‘It’s so rewarding as well,’ says Margaret of this important work.

She’s incredibly proud of her son, calling him “a trailblazer”. He’s proud, too, of how he’s helping inspire courage and empowerment in others and helping show society in general that differences are just part of normal life. All the same, Jamie’s own estranged father still hasn’t spoken to him since that 2011 documentary

. It’s sad, but he remains calm, philosophical and understanding, ‘We don’t know what his thoughts are, do we,’ he says.

Frequently in the public gaze, Margaret and her all-in-one-son-daughter need to look the part. In the early years Jamie, mum and grandma would design and create his outfits. Do they still do that? Yes, they do. In fact, it was Jamie’s own creation he wore at the 2018 Olivier Awards. But does mum like dressing up as much as he does? Yes, she does – but at a less flamboyant and glamorous level, of course!

As well as sharing glamorous spotlights at first nights and award ceremonies, Jamie and Margaret are seen at various other venues – on this tour, after Sheffield they’ll be at four more at least (Newcastle, Edinburgh, Southampton and Birmingham).They still see the show sometimes with friends and family, too. Yet even though they’ve seen it many times, they insist the pleasure and the power of that emotional journey never grow stale. The impact hits them every time, bolstered by each audience’s overwhelming response. ‘I was in floods of tears right through the second act,’ Jamie says at the start of this new tour, and he’s full of praise for the cast, especially Layton Williams (who also played in the West End) and Shane Ritchie as Drag Queen Loco Chanel.

The pair have high, high praise, too, for the upcoming film with Sarah Lancashire, Shobna Gulati, Richard E. Grant and newcomer Max Harwood as Jamie, and in which they make cameo appearances. ‘It’s surpassed our expectations. It’s incredible,’ says Jamie, who watched much of the filming. The film’s director, as of the stage show, is Jonathan Butterell, with screenplay by Tom McRae. Again it’s set in Sheffield and, like most who spend time there Jamie and Margaret warmly confess that Sheffield now feels ‘like a second home.’

So what’s in store for the future? The show will run and run, the film will air, but what else? Recently, Jamie’s Drag Queen alter ego Fifi LaTrue toured in Sinderella, an outrageous adults only pantomime. Now Fifi’s in preparation for a one-woman show that should be ready to go in the next few months. After that Jamie would really love her to go for a bigger scale production. If he ever has time, he also fancies launching his own fashion brand. By and large, though, he reckons he’ll just see what options and opportunities come his way. ‘You never know what’s round the corner,’ he says, which is a policy that’s worked brilliantly for him so far.

Though he’s been living in London, he’s back home for a while now, up north where mum, friends and relations live. It’s true they enjoy the spotlight immensely and admit they’d miss it very much if it stopped shining, but they still much appreciate their quiet, “normal” downtime with friends and family. ‘We get away from the mad world of the West End,’ says Margaret, ‘We get some fresh air and keep our feet on the ground.’ Jamie will definitely return to London, though, ‘Oh, I’m not done with the bright lights yet!’ he says. Just as we thought!